When McDonald's Corporation (NYSE:MCD) reports fourth-quarter 2017 earnings on Tuesday, investors will be eager to ascertain if the latest batch of numbers supports the admirable earnings momentum and stock price movement the Golden Arches have sustained in recent quarters. Over the last three calendar years, the world's largest burger chain has gifted its stakeholders with an average annual total return of 33%. Bridging the prior year's completion and current-year prospects, the fourth-quarter report is always a critical one for shareholders to pore over. Below, we'll review key themes relevant to both year-end 2017, and the company's overall outlook for this year.

Last quarter, McDonald's posted extremely strong global comparable sales, or comps growth of 6%. The company reported positive guest counts in each of its four operating segments: U.S., international lead markets, high-growth markets, and foundational markets. Guest traffic stabilized in 2017 after years of decline, so another quarter of positive comps composed of both pricing increases and positive guest counts will signal strength in the year ahead. 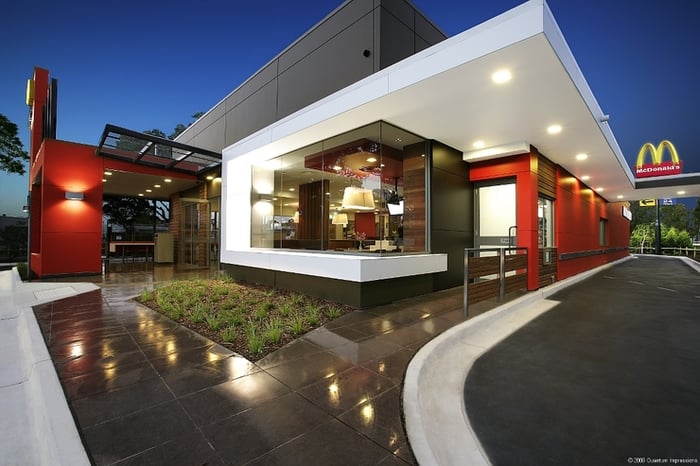 Investors should pay particularly close attention to the international lead markets segment, which is composed of the five largest markets outside the U.S.: Canada, Australia, the U.K., France, and Germany. This segment generates 40% of McDonald's global operating income, making it equal in size and importance to the U.S. If McDonald's unveils another stellar comps rise, it may well be fueled by the accelerating European economy, thus lifting three out of the five countries in international lead markets.

While McDonald's new tiered value menu, launched in January, won't affect fourth-quarter 2017 results, management will most certainly provide some commentary on the first few weeks of its launch. The new menu structure replaces McDonald's "McPick 2 for $2" and "McPick 2 for $5" offerings, and is meant to be a more permanent value proposition aimed at the organization's core customers.

I recently wrote about the rationale behind these price points. Going forward, shareholders should seek to understand the value menu's impact on franchisees. Margins are slim for franchisees at the $1 price point. However, the new configuration is intriguing, as $3 items like the new "Classic Chicken Sandwich" bridge the gap between traditional value points and more profitable core burgers and premium sandwiches. Look for management to discuss initial franchisee reception of the tiered price points during the company's post-earnings conference call tomorrow.

A favorable dynamic benefiting McDonald's earnings over the past year has been the company's ability to pass on pricing as commodity costs have increased, yet within disciplined increments that don't drive customers away. For example, in the third quarter of 2017, the price of McDonald's basic basket of grocery goods to serve customers in the U.S. increased by 1.5%. The U.S. segment covered this increase by raising menu prices by 2.2% over the same period, but the nudge remained under U.S. domestic food-away-from-home inflation rate of 2.4%. The company typically provides a full-year commodity cost outlook each year, and a projection similar to 2017's 1% total commodity cost inflation tomorrow will bode well for McDonald's earnings in 2018.

Experience of the future

A long-term growth driver that most excites McDonald's management team is the company's "Experience of the Future," or EOTF. This is basically shorthand for technology improvements within restaurants that allow for easier order customization, as well as an enhanced in-restaurant guest experience through innovations such as self-ordering kiosks. The company began to scale this technology upgrade across the U.S. in 2017. In the current reporting period, investors will learn if McDonald's hit its full-year 2017 target of 2,500 EOTF conversions in the U.S. More importantly, management will probably provide a 2018 conversion target for the remainder of the company's 14,000-plus U.S. locations. 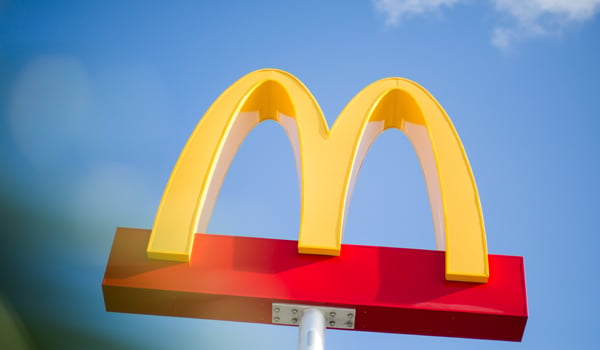 McDonald's has completed the greater part of a multiyear effort to shift the percentage of franchised restaurants within its system from 80% to 95%. As of the end of the third quarter of last year, franchised restaurants claimed 91% of McDonald's systemwide store count. Compensating for the lower total revenue associated with fewer company-operated restaurants, McDonald's is seeing much higher margins as it collects a greater amount of franchise fees and royalty checks from its operators.  Management has set a long-term operating margin target within the mid-40% range.

In addition to lower overhead, McDonald's is realizing higher profits from productivity initiatives related to its goal to cut $500 million from general and administrative expenses by the end of this year, as well as lower depreciation expense as company-run locations are removed from the books.

So, will 2018 prove to be a breakout year for operating profits? Perhaps not. Spending on technology initiatives, including EOTF and the company's digital loyalty and ordering platforms, may slow profit gains this year. Investors shouldn't be caught unaware if management issues a muted margin growth outlook, or even sets 2018 operating margin even with 2017. Given the various ongoing menu and operational investments the company is currently engaged in, profit expansion may take a few quarters to catch up.