Almost any American who's traveled by air is familiar with the operations of Hudson Ltd. The company operates many of the newsstand, convenience, and specialty retail stores located in airport concourses. Currently owned by Switzerland-based media conglomerate Dufry (OTC:DUFRY), Hudson Ltd. is coming to the stock market after an IPO that stands to raise around $800 million.

Frequenting Hudson Ltd.'s stores is a pleasant way to idle time away at an airport. Here's a look at whether its stock might also be a good investment. 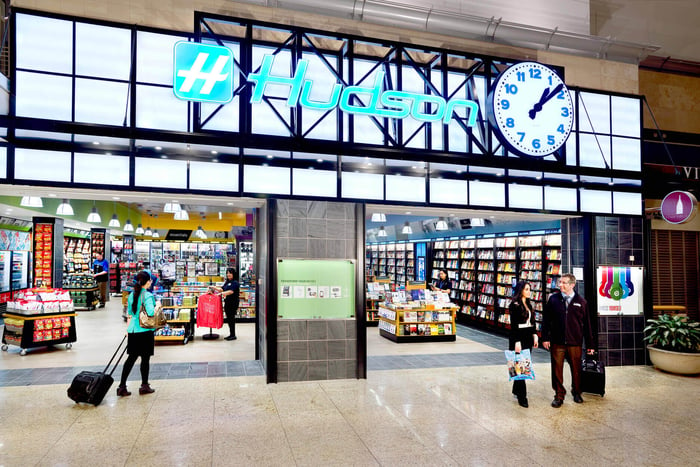 Hudson Group, the entity that's morphing into Hudson Ltd. as part of the IPO, operated 989 stores across the U.S. and Canada, had a presence in 24 of America's 25 largest airports, and was acquired in 2008 by Dufry, which describes itself as "the world's leading travel retailer."

Hudson Group typically operates its stores under the Hudson News brand. Its more specialized outlets use different names, such as Hudson Booksellers or Tech on The Go. It also manages single-brand stores that offer goods made by Tapestry's (NYSE:TPR) Coach and Estee Lauder (NYSE:EL), to name two of a few examples.

A leap in store count -- due partially to a pair of Dufry acquisitions early this decade of retailers The NuanceGroup and a majority stake in World Duty Free -- has helped spur growth for Hudson Group. This has been aided by a steady rise in North American air passenger volumes, plus increased "dwell time" at airports due to more stringent security measures.

It's still growing, although not as robustly. In the first nine months of 2017, it managed to lift revenue by 6% (to $1.35 billion), on the back of same-store sales growth of 4.6%. Adjusted net income rose by 5% to slightly over $29 million. The company has also been consistently in the black in terms of operating and free cash flow.

Establishing a commanding position and growing a business don't come cheap, however. Debt stood at almost $600 million at the end of last September, thanks to its borrowings from affiliates of parent Dufry. Interest expenses cost it nearly $30 million in 2016.

Hudson Ltd. is still going to be yoked to Dufry, as the European operator will hold the all-important Class B shares of the company. Each confers 10 votes for the holder, as opposed to the one vote for the Class A stock being sold in the IPO. This will give Dufry over 93% of Hudson Ltd.'s total voting power.

I would be concerned about this, since in these kinds of situations, a company with such a commanding hold tends to operate the asset for its own advantage.

That wouldn't necessarily be a bad thing, only in this case Dufry is pocketing the loot, too. All the IPO's proceeds will flow to the company, which indicated it will use to pay down debt. At the end of last September, its long-term borrowings stood at 3.86 billion Swiss francs ($4.02 billion), which was more than half its 2016 annual revenue.

So, to me, this is a cash-raising play that doesn't offer enough in return. Hudson Group/Ltd. is a solid company that has done very well in its niche, and has strong partners in the likes of Tapestry, Estee Lauder, and other top manufacturers (although that high debt is a worry). It's just too bad its new shareholders won't have much control over its destiny, and it won't directly benefit from the IPO.

Just over 39.4 million A shares of Hudson Ltd. are being sold in the offering, at a price of $19 to $21 apiece. The stock will be listed on the New York Stock Exchange under the ticker symbol HUD, and its first day of trading is slated for Thursday, Feb. 1.