Shares of gene editing pioneer Editas Medicine (NASDAQ:EDIT) rose nearly 16% yesterday before closing the day with a 13.2% leap. That was followed by gains of 13.5% and 8.6% for CRISPR Therapeutics (NASDAQ:CRSP) and Intellia Therapeutics (NASDAQ:NTLA), respectively. What was the catalyst pushing the former two to new 52-week highs?

Unfortunately, investors should probably expect increased volatility in gene editing stocks in 2018 as the technology landscape heats up and the first clinical trials get started in the United States and Europe. 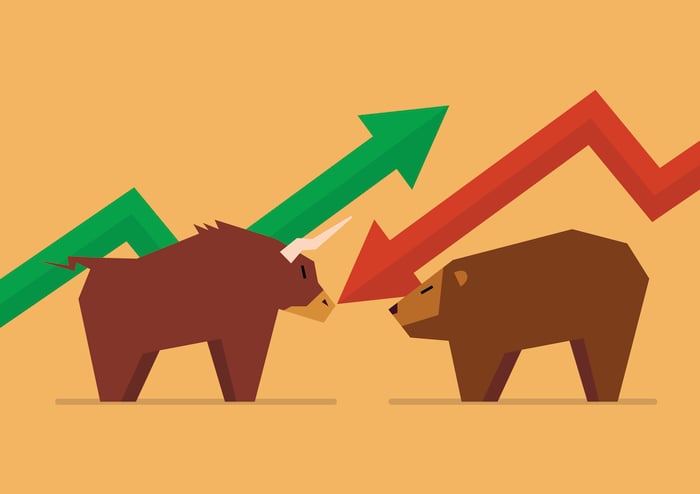 CRISPR has been in the news a lot so far this year. From a pre-print study hinting that certain components of the most widely deployed gene editing tools could be chopped up by the human immune system (which would be a huge impediment to clinical trials), to news that China is plowing full-steam ahead in testing the technology in human trials (beating the West as it mulled ethical concerns).

The technology's star will continue to rise. The first clinical trials using CRISPR in the United States and Europe are expected to begin this year. Editas Medicine remains on track to file an Investigational New Drug Application for a drug candidate taking aim at LCA10, an eye disease. It plans to have three early stage clinical trials and two late-stage clinical trials under way by 2022.

Meanwhile, CRISPR Therapeutics could get the green light from European regulators to begin a trial targeting the blood disorder beta thalassemia. Intellia Therapeutics has yet to set expectations with a timeline for clinical trials, but shouldn't be too far behind.

Even still, 2018 may only be the year of anticipation. Some analysts think over one dozen trials involving CRISPR tools could be initiated in 2019.

Investors should continue to expect volatility in CRISPR stocks as it becomes more and more difficult to parse the signal from the noise. As the technology becomes more widely used in healthcare settings globally, more coverage -- studies and stories -- will be released with the potential to make or break the near-term momentum for related stocks. Therefore, it's important to remain focused on the long-term and mitigate risk by remaining vigilant of blockbuster R&D partnerships, cash balances, and any red flags that may pop up in early stage trials.