Fred Astaire and Ginger Rogers. Bonnie and Clyde. Mulder and Scully. Famous couples do have their own separate identities, but like peanut butter and jelly, they're much more memorable as pairs. Now it looks like Johnnie Walker whiskey is going to get a partner.

Global distillery Diageo (DEO 0.91%) just applied to the U.S. Patent and Trademark Office for rights to the words "Jane Walker" to be used for all alcoholic beverages except beer, meaning the Johnnie Walker Scotch brand could be getting a decidedly feminine touch. 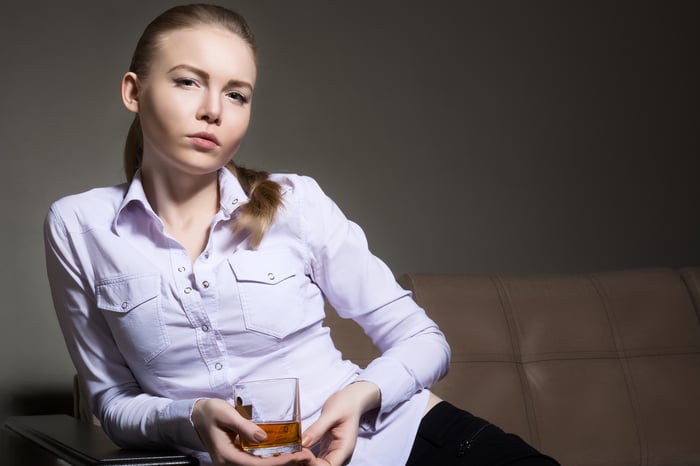 Consumption of alcohol by women has been rising steadily since the 1950s, and studies suggest they may drink as much alcohol as men today, with younger women possibly drinking even more.

Whiskey, in particular, has seen an immense uptick in popularity over the past few years, across both the male and female demographic. According to the trade association Distilled Spirits Council of the U.S., bourbon, Tennessee whiskey, and rye enjoyed an 8% jump in sales in 2016 to $3.1 billion, with volumes rising 6.8% to 21.8 million cases. Cognac did even better, rising 13% for the year, and Irish whiskey jumped almost 19%.

Diageo is one of the world's largest distillers, and it derives the lion's share of its revenue from its Scotch portfolio, which represents a quarter of Diageo's $15.9 billion in annual sales. Johnnie Walker is its premier brand, but the distiller also owns Buchanan's, which is the second most popular Scotch in the U.S.; Black & White, Diageo's top seller in Brazil; and J&B, the No. 1 Scotch in Spain. It also owns Windsor, Old Parr, and Lagavulin, each of which holds a leading position in various markets around the world.

Though none has been marketed as an especially female adult beverage, with more women drinking that's likely going to change. NPR notes that two decades ago, about 15% of whiskey drinkers were women, but by 2014, their share had grown to as much as 37% of the total.

Women on a whiskey river

Ad viewers may have noticed Jim Beam started featuring actress Mila Kunis prowling around bourbon casks in its commercials recently, but before the 2016 presidential election, in anticipation of Hillary Clinton winning the race, Diageo had purportedly commissioned an ad that would have delved into gender equality and women achieving new heights.

Obviously, Diageo has been eying this growing segment of the whiskey-consuming public for a long time. What's notable is the distiller's willingness to create a new identity for the spirit, something it hasn't done previously with other beverages.

For example, when flavored vodka was all the rage, Diageo's Ciroc brand focused on the flavor and not necessarily on who was drinking it, though it may very well have been that women were those experimenting most with the spirit. And the new trademark may not mean we'll see bottles with a Jane Walker label appearing on store shelves. Earlier this month, a blog devoted to drinks and music called Drampedia found a new Johnnie Walker Black label that was subtitled "The Jane Walker Edition".

The Johnnie Walker brand is maintaining its worldwide renown and experiencing growth -- Johnnie Walker's net sales rose 8% in 2017. A version of the whiskey explicitly geared toward women could take scotch in a new direction and boost sales even further.