IBM (NYSE:IBM) shareholders have been very patient over the years while the stock has lagged the broader markets. During that time, IBM has worked extremely hard to develop new products, as many of its legacy offerings have declined amid competition and/or technological change. That led to 22 straight quarters of year-over-year revenue declines, which is not what investors had been looking for in this growth-obsessed market.

However, IBM's recent earnings report marked a milestone five years in the making: a return to revenue growth. In the fourth quarter, revenue grew 3.7% year over year, and while this was helped by a currency tailwind, the company still posted 1% growth with currency stripped out. Still, skeptics found things to be concerned about. Here's what investors need to know. 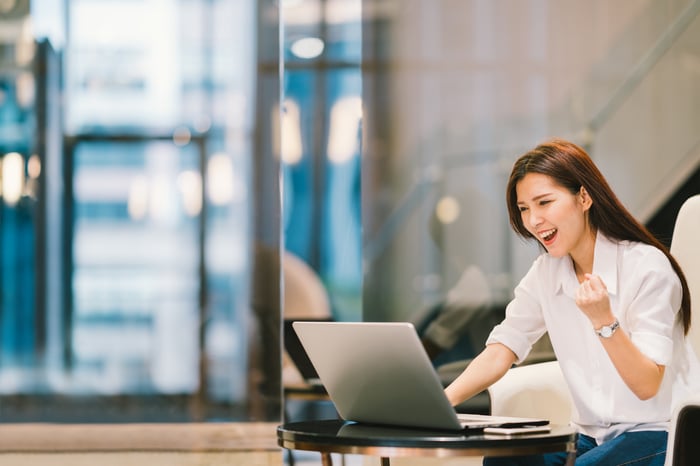 A story with multiple parts

Critics will likely point to the outsized impact in the just-reported quarter of the systems segment, which includes systems hardware and operating systems hardware. The fourth quarter saw the first full quarter of sales of IBM's new z14 mainframe, which was just released in September. The new mainframe, with automated end-to-end encryption, has been very well received by IBM's customers, and is a feature of IBM's cloud data centers. In addition to the mainframe, sales of IBM's flash storage products and Power processors also grew, contributing to 28% growth in this segment.

Aside from systems, the other three main segments all posted revenue declines or no change in revenue.

Some analysts may doubt that systems revenue growth is sustainable, attributing the increase to the timing of a new product introduction. On this point, management pushed back (all conference call quotes are via Seeking Alpha):

... the demand for mainframe is driven by the secular trend for security. It is not so much about, like, there's a new mainframe, so I have to buy one. It's not so much in POWER9 that, Oh, there's a new POWER9. I have to buy it. ... we introduced those shifts and those secular ideas through the strategic imperatives, and all of these offerings are riding that secular trend. ... the cyclical versus secular is not as simple as some want to portray it.

Management wants to stress that every systems refresh incorporates elements of existing secular trends, like heightened security features. Therefore, management thinks systems revenue is more stable over the long term, and not dependent on a single hit product every so often.

In 2015, IBM unveiled its "strategic imperatives" around analytics, cloud, security, and mobile, to highlight the big growth drivers in IT. These imperatives are present within each segment, and overall, strategic imperatives revenue grew 17% (14% in constant currency) in the most recent quarter, making up 46% of trailing-12-month revenue, up from 45% last quarter.

IBM also earned $450 million in global financing revenue this quarter, but as you can see, strategic imperatives revenue makes up more than half of nonfinancing revenue, which is a promising sign.

One point of caution may be in the cognitive solutions segment, where strategic imperatives revenue actually declined, and which is also the segment with the biggest amount of strategic imperatives revenue. On that question, management said, "Where we saw weakness [in cognitive] ... was in a couple of traditional analytics offerings like data integration and content management where we either have to go spend some more time getting those offerings better developed ... or we're shifting some of those license models to as-a-service."

The specialized cognitive offerings in which IBM has invested -- Watson and security -- did grow in the quarter, but these more "traditional," or generic, products lagged. That's not a surprise, as certain products and services, such as data integration, are experiencing challenges due to the rise of new technologies.

While much of the discussion during the conference call with analysts was around margins and tax rates, it was a positive to see the company return to growth. While the 1% growth rate was modest and there is still work to do, the positives seem to be outweighing the negatives in my eyes, and that is certainly a welcome sign.