Please ensure Javascript is enabled for purposes of website accessibility
Log In Help Join The Motley Fool
Free Article Join Over 1 Million Premium Members And Get More In-Depth Stock Guidance and Research
By Leo Sun - Feb 2, 2018 at 11:35AM

Chinese regulators recently ordered Weibo (WB -1.05%) to suspend several of its portals for a week, claiming that they hosted content which encouraged a "wrong public opinion orientation, obscenity, and ethnic discrimination." Weibo said that it accepted the criticism, and suspended several of its popular portals -- including its "hot search" site and celebrity portals -- for a week. Its core microblogging site was not affected by the suspension.

Nonetheless, shares of Weibo slipped after the order, which represents another escalation of the government's attempts to clamp down on the social networking platform. Chinese regulators reportedly shut down as many as 128,000 websites which contained obscene or "harmful" information in 2017, which casts a dark cloud over Weibo's long-term growth. 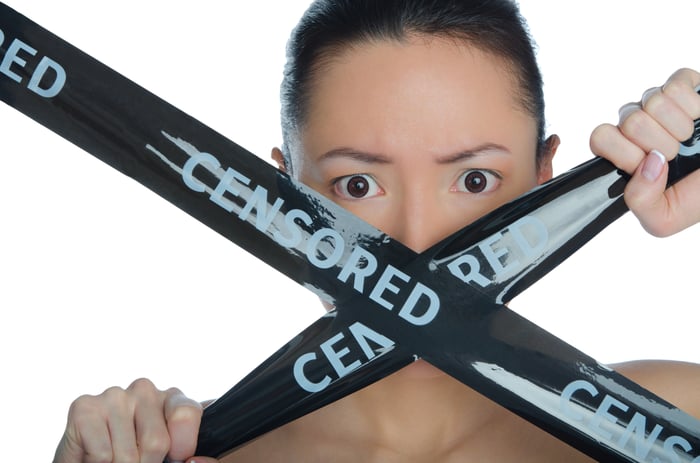 A long history of tense clashes

Weibo and its former parent company SINA (SINA), which still owns a majority voting stake in the company, have both been targeted by regulators before.

In 2011, regulators demanded that all Weibo users register their real names, an order which Weibo only loosely enforced. In 2012, the government implemented a "five-strike" rule against Weibo users who repeatedly posted about sensitive subjects. In 2013, regulators arrested several top Weibo account holders, including angel investor Charles Xue, in a broad crackdown on online "rumors".

In 2014, the government threatened to revoke SINA and Weibo's internet publication and audio visual permits, claiming that the sites were spreading "pornographic" content. Later that year, SINA spun off Weibo as a public company.

However, the regulatory pressure continued rising. Last June, regulators ordered Weibo and two other companies to halt their live video and audio streams until they obtained new government-approved licenses.

Last September, they fined SINA, Baidu, and Tencent (TCEHY -3.62%) over allegations that their platforms were being used to "spread information of violence and terror, false rumors, pornography, and other information that jeopardizes national security, public safety, and social order."

Will Weibo ever placate the regulators?

Therefore, the latest order for Weibo to suspend its portals shouldn't be surprising. However, investors are probably wondering if Weibo can ever fully placate the regulators without alienating its users.

Weibo repeatedly hired more censors to filter out offensive content, tightened its censorship standards, and requested its users to register their real names. It introduced "social credit" scores which could limit or block a user's activities on the platform, and even restricted its users from editing their personal profiles during the Communist Party's National Congress last October.

Unfortunately, the only social media business model that seems to satisfy regulators is Tencent's approach with WeChat, the most popular messaging app in China. Chinese users of WeChat, known as Weixin in China, must register their real names and phone numbers before being granted an account. This method of tracking users is so effective that the Chinese government now accepts WeChat ID as the country's official electronic ID.

Weibo likely knows that if it implements similar rules, it could lose a lot of users. Weibo had 376 million monthly active users (MAUs) at the end of the third quarter, but investors might forget that its user growth turned negative several years ago as users migrated to WeChat. Back in 2014, The Telegraph also found that Weibo's user numbers dropped after every high-profile crackdown on the network between 2011 and 2013.

Weibo only regained its footing by securing partnerships for pre-installed apps with smartphone makers, expanding into rural areas, and streamlining its business to showcase trending topics and top celebrity accounts. But with the government now scrutinizing its top portals, Weibo's growth could grind to a halt.

Analysts expect Weibo's revenue and earnings to respectively rise 68% and 105% this year thanks to its double-digit growth in MAUs, the popularity of its top accounts (its top celebrity, Xie Na, has over 90 million followers), and the expansion of its ecosystem with new features like live video. However, those estimates could be far too high if regulators tighten their grip on Weibo over the next few quarters.