Of course, it's not supposed to be like this. Strengthening end markets usually lead to margin expansion, but just as with MSC Industrial Direct (NYSE:MSM), margin pressure remains. Here's what happened and why in WESCO's fourth quarter. 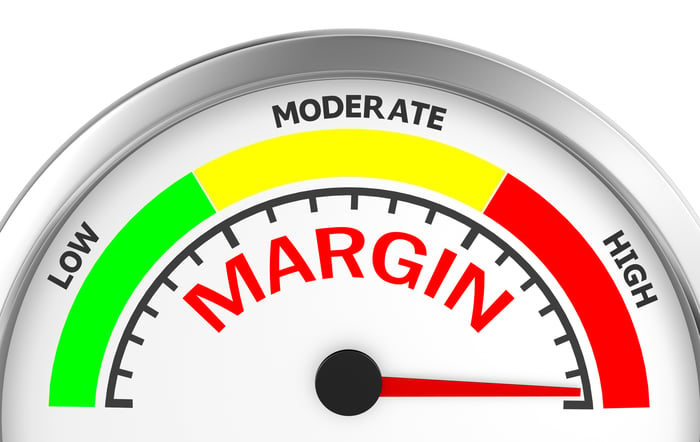 In a sense, the fourth-quarter results were a copy of WESCO's third-quarter earnings. Just as three months ago, when sales growth of 7.8% came in significantly ahead of guidance for 2%-5%, WESCO's sales growth easily surpassed expectations. However, the third-quarter operating margin of 4.5% was merely at the high end of guidance for 4.2%-4.6%, and the fourth-quarter performance was arguably worse, particularly considering sales were so far ahead of guidance. And a low-single-digit operating margin means that any issue with margin can make a large difference to the company's profitability.

What management said about margin

The commentary on margin sounded a familiar refrain. Throughout 2017, companies like WESCO and MSC Industrial had spoken of a pressure on margin coming from a combination of rising raw material costs and a market environment in which it was difficult to push through price increases.

As such, MSC Industrial's key aim is to try to push through a price increase in the second quarter. WESCO CEO John Engel said, "2018 is all about continuing the growth and getting the margin expansion."

As you can see below, WESCO's and MSC Industrial's margins simply haven't bounced back as they did in previous recoveries in U.S. industrial production. 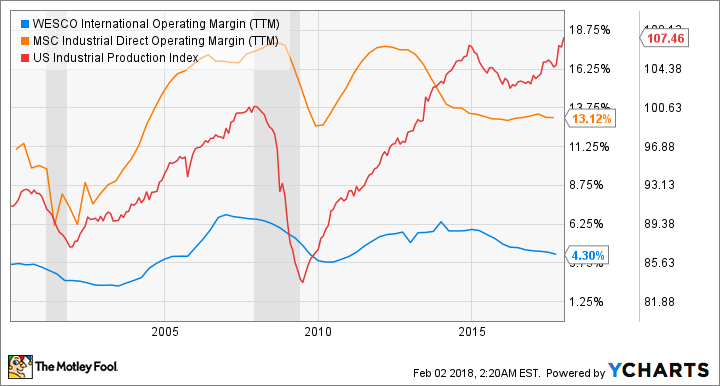 WESCO "continued to make progress in passing along inflation as we again recorded favorable pricing of approximately 2% in the fourth quarter," according to CFO Dave Schulz on the earnings call, but it wasn't enough to generate operating margin expansion. Indeed, Schulz acknowledged that WESCO was "having difficulty" passing through cost inflation from its suppliers to its customers.

What WESCO International is planning

However, there are a few points to consider here. First, sales growth remains strong and Schulz expects sales growth in the first quarter to be in the range of 6%-9%. As you can see below, WESCO's two largest end markets -- industrial (37% of 2017 sales) and construction (33%) -- are growing strongly. Given the optimism around U.S. GDP growth prospects in 2018, it's reasonable to expect good growth from WESCO.

Indeed, customers are "being more optimistic and talking about more robust plans for spending in 2018," according to Engel. 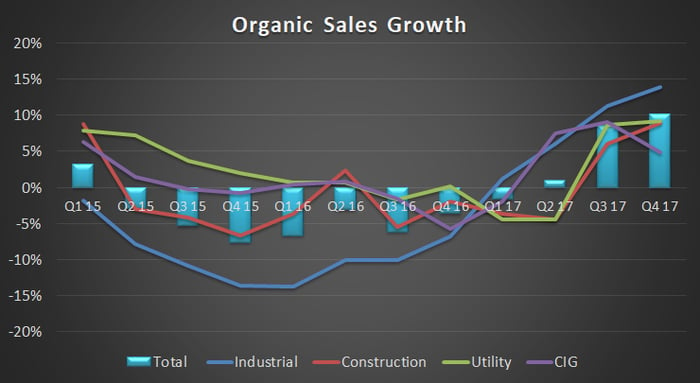 Second, Engel talked about price increases of 2%-5% being in WESCO's plans, and Schulz mentioned "profit improvement in the second half relative to the first half."

All told, the hope is that WESCO can pass through price increases while maintaining volume growth. If so, then management will achieve its main priority of expanding margin in order to fully benefit from better end-market growth, although you might have to wait until the second half before fully seeing it in the numbers.