Most obesity drugs haven't been huge successes. But these stocks just might be.

It's been slim pickings for investors looking to make great returns from obesity-drug stocks. Only a few years ago, expectations were high for the potential of new obesity drugs from Arena Pharmaceuticals (ARNA), Orexigen Therapeutics, and VIVUS. Now, Arena is focused on other areas. And the market caps of all three companies have tanked.

The reality is that there aren't many good obesity-drug stocks for investors to even consider buying. Probably the best alternatives are pharmaceutical companies that market obesity drugs but make most of their money in higher-growth areas. Three stocks that fit the bill are Eisai (ESALY 1.38%), Novo Nordisk (NVO 0.19%), and Roche Holdings (RHHBY 0.72%). 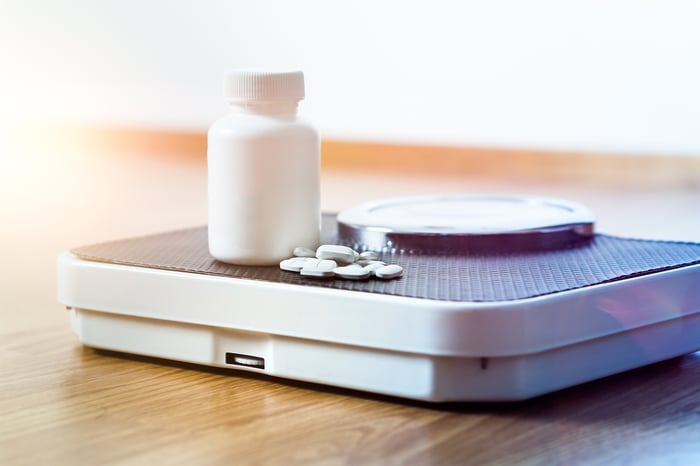 Japanese drugmaker Esai signed on as the commercialization partner for Arena's weight-loss drug Belviq back in 2010. The drug won approval from the U.S. Food and Drug Administration a couple of years later. Both companies expected success for Belviq, which showed considerable promise in helping patients lose weight in clinical studies.

That success didn't materialize. Eisai fielded a large U.S. sales force to promote Belviq's launch in 2013. The company doubled the size of the sales team later in the year. Even more sales representatives were contracted in 2014. It wasn't enough, though. Belviq flopped.

Arena, in need of cash, sold full rights to Belviq to Eisai in January 2017. While gaining more flexibility to manage the obesity drug could help Eisai, it's definitely not a reason to buy the pharma stock.

However, Eisai does have a few things going for it that could interest investors. One positive is that the company co-markets the world's top-selling drug of 2017, Humira, in Japan with AbbVie (ABBV 0.42%). Eisai also has three global brands in addition to Belviq that are growing sales -- cancer drugs Lenvima and Halaven plus epilepsy drug Fycompa.

Buying Eisai stock could also pay off handsomely if late-stage studies of experimental Alzheimer's disease drug aducanumab are successful. Biogen (BIIB 3.28%) partnered with Eisai on the drug and is leading the phase 3 studies. However, Eisai stands to receive 45% of potential profits in the U.S., 31.5% of profits in Europe, and 50% of profits in the rest of the world if aducanumab wins approval.

Market research firm EvaluatePharma ranks aducanumab as the most valuable pipeline asset in the world right now. Analysts project peak sales for the drug could be at least $10 billion annually, and perhaps as much as $20 billion. However, as is the case with obesity drugs, the Alzheimer's disease landscape is littered with once-promising products that ultimately fizzled.

Novo Nordisk lays claim to a rarity -- a successful obesity drug. Saxenda won FDA approval in December 2014 and gained a thumbs-up for a label update in April 2017 that showed long-term safety and efficacy. Novo Nordisk recently reported that sales for Saxenda soared 62% year over year in 2017 to 2.6 billion Danish kroner (in the ballpark of $400 million in U.S. dollars).

Saxenda isn't Novo Nordisk's fastest-growing drug, though. That honor belongs to Tresiba. Sales for the insulin analog skyrocketed 81% in 2017 over the previous year. But there's another diabetes drug that I think makes Novo Nordisk even more appealing -- Ozempic. 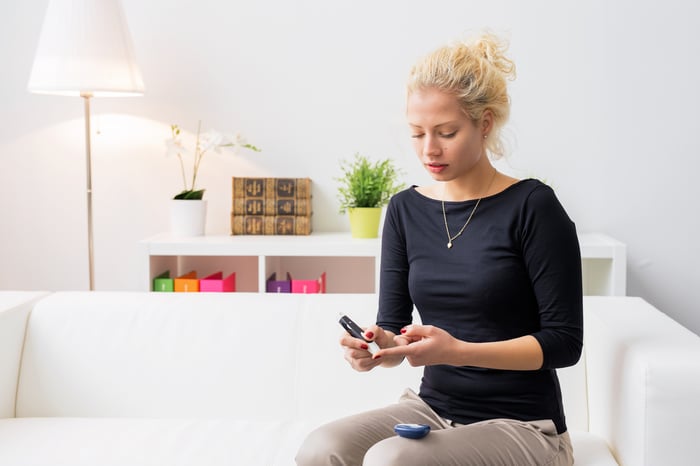 The FDA approved Ozempic for treating type 2 diabetes in December. Novo Nordisk will begin marketing the drug in the U.S. just a few days from now. EvaluatePharma projects that Ozempic will be the second-biggest new product launched in 2018. The drug could generate annual sales of $2.7 billion by 2022.

Ozempic should take the baton from Novo Nordisk's tremendously successful diabetes drug Victoza. While Victoza must be taken once daily, Ozempic only has to be taken once per week. The new drug not only helps reduce blood sugar levels, but it also helps patients reduce weight.

Roche markets one of the oldest obesity drugs on the market, Xenical. The FDA approved the drug back in 1999. But while the drug is still sold, don't expect to find any reference to Xenical in any of Roche's recent financial reports.

The company claimed two of the five best-selling drugs in 2017. Rituxan brought in nearly $8 billion in revenue last year, while Herceptin made more than $7.5 billion. Avastin wasn't too far behind, with 2017 sales of more than $7 billion.

Roche also has some newer drugs with strong momentum in its lineup. Sales for cancer immunotherapy Tecentriq tripled in 2017 compared to the previous year. Sales for cancer drug Alecensa doubled year over year and should grow even more after receiving FDA approval in November as a first-line treatment for non-small cell lung cancer. Leukemia drug Gazyva's sales increased 41% from the prior year.

Multiple sclerosis drug Ocrevus is another big winner for Roche. After obtaining FDA approval in March, Ocrevus went on to generate sales of more than $900 million for Roche plus another $159 million in royalties for Biogen.

Of the these three obesity-drug stocks, I think the best pick is Novo Nordisk. Eisai could turn out to be a great choice if aducanumab proves to be successful in treating Alzheimer's disease. There's a significant risk, though, that the drug won't deliver as hoped.

Roche has a nice stable of new drugs. On the other hand, sales are stagnating for its older blockbusters, Avastin, Herceptin, and Rituxan. Competition from biosimilars will only make Roche's challenges tougher in the next few years.

Novo Nordisk recently disappointed investors with its fourth-quarter 2017 results. However, I really like the potential for Ozempic. And Saxenda is proving to be a great asset for Novo also. Overall, Novo Nordisk appears to have the least risky avenue for future growth.

Having said that, though, I'm not calling any of these three stocks as definite buys for investors. It's not that Eisai, Novo Nordisk, and Roche won't see decent returns. My view is simply that there are better opportunities available.