The strong tailwinds in the gaming industry are working in NVIDIA's favor.

NVIDIA (NVDA -4.20%) is set to report its fiscal fourth-quarter earnings on Feb. 8, after market close. There's a lot going on at NVIDIA, with data centers, the cryptocurrency trend, the Nintendo Switch, and the automotive segment all contributing to the graphics specialist's financial results. However, as gaming goes, so goes NVIDIA.

The gaming segment made up 57% of the company's trailing 12-month revenue through October 2017. Although I don't expect the gaming segment to post anything close to the 66% year-over-year growth that NVIDIA reported in last year's fourth quarter, it should still be a strong quarter, as I'll explain below. 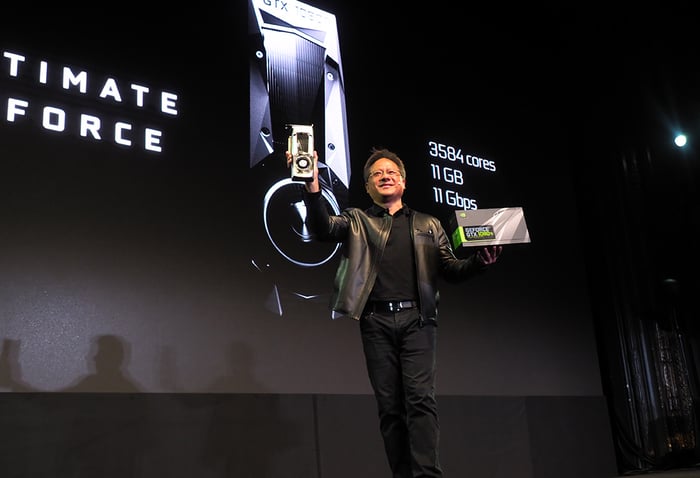 NVIDIA has what gamers want

There were several big game releases in the fall, which is the fundamental ingredient for growth in the gaming segment. This encourages gamers to upgrade their graphics processing units (GPUs) in order to play the latest games at the best graphics settings. During NVIDIA's fiscal Q3 investor conference call, CFO Colette Kress said demand for Pascal-based graphics cards has been robust:

We saw robust demand across all regions and form factors. Our Pascal-based GPUs remained the platform of choice for gamers as evidenced by our strong demand for GeForce GTX 10-Series products. We introduced the GeForce GTX 1070 Ti, which became available last week. It complements our strong holiday lineup ranging from the entry-level GTX 1050 to our flagship GTX 1080 Ti.

I'm expecting a strong quarter out of NVIDIA's gaming segment for three reasons. First, as Kress touched on in the quote, there's the tremendous momentum NVIDIA has had all year, and tighter competition from Advanced Micro Devices' Vega GPUs hasn't been enough to slow it down.

Second, although it's not a perfect science, the monthly Steam hardware survey shows NVIDIA's mid-tier Pascal GPUs, such as the GeForce GTX 1060 and 1050 Ti, being used by a much larger percentage of Steam users compared to recent months. For you non-gamers out there, Steam is a popular digital distributor of PC games, and given that more than 90% of PC gamers download their games, the Steam survey can be a helpful gauge of which cards on the market are used the most.

Take a look at this table, which shows the percentage of Steam users using certain video cards from August through December:

And, no, I'm not cherry-picking the list and leaving AMD out on purpose. Those are the top-ranked cards in descending order, which brings me to my third reason.

After Jon Peddie Research showed AMD picking up a few percentage points of market share in Q2 around the launch window of AMD's new Vega GPUs, the latest data showed NVIDIA increasing its share from 69.7% in Q2 to 72.8% in Q3. Jon Peddie's data backs up the increasing popularity of NVIDIA's cards as shown in the Steam survey.

I can't emphasize enough how important it is that NVIDIA is doing so well with its gaming segment in the middle of dramatic changes sweeping through the gaming industry. The PC as a gaming platform is better than ever, and it's only going to keep improving.

The growth in game streaming sites, such as YouTube and Twitch, and esports are expanding the PC player base, which is estimated to grow from 1 billion to 1.4 billion by 2020. The health of the PC platform also continues to attract talented developers to create immersive gaming experiences that are drawing a big audience, not just in terms of game sales, but also in viewership on Twitch. The phenomenal success of Playerunkown's Battlegrounds -- which took the PC world by storm in 2017 both in sales and its high-ranking position in hours viewed on Twitch -- is a perfect example.

In May 2017, NVIDIA announced its new Max-Q designed gaming laptops. Max-Q laptops are thinner, quieter, and run faster. This allows PC gamers to enjoy the same compactness of a console, but with the greater power that comes with high-end GeForce GPUs.

These are the major dynamics underpinning the growth in the gaming industry, and it's a large reason why NVIDIA's gaming segment has been knocking the cover off the ball lately.

Management is calling for revenue across all segments to grow 22% year over year. We're getting into the middle of the upgrade cycle, as more gamers have shifted from the older Maxwell generation to Pascal GPUs, and so it will be a tougher year-over-year comparison for NVIDIA's largest segment.

While management doesn't provide specific guidance for earnings, the consensus analyst estimate calls for the company to report non-GAAP earnings per share of $1.16, representing growth of 17% year over year.

A strong fall for game releases will put the gaming segment in the spotlight when NVIDIA reports. With the stock trading at 60 times trailing earnings and hitting new highs, investors will want to see NVIDIA holding its momentum and market share lead in the biggest quarter of the year for gaming.