Please ensure Javascript is enabled for purposes of website accessibility
Log In Help Join The Motley Fool
Free Article Join Over 1 Million Premium Members And Get More In-Depth Stock Guidance and Research
By Rich Duprey - Updated Apr 27, 2018 at 9:50AM

And it doesn't look any better after that.

If investors need any further proof that Harley-Davidson (HOG 3.50%) just doesn't get it when it comes to what it needs to do, look no further than its just-released disastrous fourth-quarter earnings report.

Sales were down sharply, with U.S. sales plunging 11% from the year-ago period, while international sales were down 4% year over year. Harley also said it's closing its final assembly plant in Kansas City, at a cost of 260 jobs. But not to worry: CEO Matt Levatich said Harley is going to produce an electric motorcycle within the next 18 months. 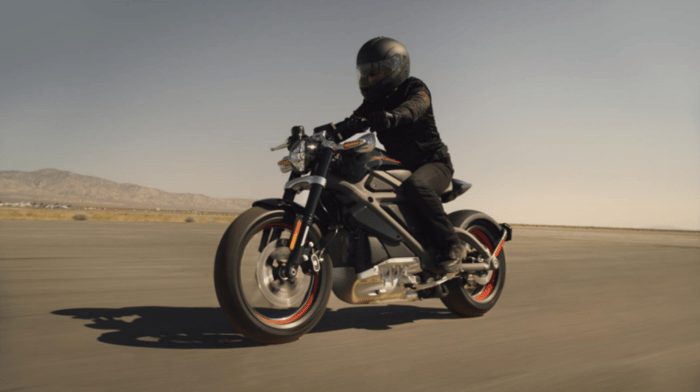 Project LiveWire was introduced several years ago, and some panned it as unworkable because the e-bike had only a 50-mile range and took a glacial three and a half hours to recharge. Even if Harley has increased the distance significantly and reduced the recharge time to a something more snappy, it's going to have the same fatal flaw as the motorcycles it's currently producing: It will be too expensive.

The decline of motorcycle sales is a sign that buyers want cheaper bikes. The new rider demographic of young, urban, and female riders want smaller, more affordable bikes, but Harley-Davidson remains committed to producing gorgeous but insanely expensive bikes for the market.

So far, under the 100-bikes-in-10-years program Levatich launched last year, Harley has introduced 16 new models (20 if you count those with engine upgrades), a truly spectacular achievement in so short a time.

Yet of those 16 new models, exactly one is priced under $10,000, the Street Rod, which starts at $8,700, a not insignificant amount. The nine new Softails Harley unveiled -- the eight original bikes under the merged Dyna and Softail platforms, plus the Sport Glide it introduced late last year -- all range between $14,500 and $19,000, while the new Special touring bikes start at $22,000 and go above $26,000. Should we even mention the limited-edition CVO bikes? At $40,000 or more for these ultra-premium motorcycles, we're talking a hefty chunk of change.

Although Harley-Davidson has never put a price tag on what its electric motorcycle might cost, most guesses have said somewhere between $20,000 and $30,000, though some go as high as $50,000.

Pricing the bike that high would be suicide for the vehicle, and even the lower price points would make it a hard sell. An electric motorcycle could be a second bike for current Harley owners if it was priced right, and it could even bring more riders to the brand if it wasn't priced out of the market.

But it would need to be something a rider could get around town with, and not just one to head out to the Bonneville Salt Flats on. That would also require the e-bike to be priced below $10,000 -- and likely closer to $5,000. Certainly, the Livewire prototype didn't look like a $50,000 bike, but it didn't look like a $10,000 one, either. What Harley-Davidson will probably end up with is another beautiful piece of machinery that few will want to ride or can afford to. It's the exact problem it has now. 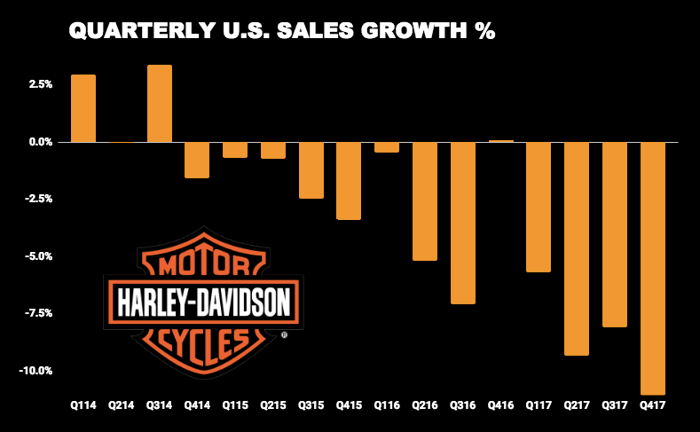 Still more air beneath it

Where Harley-Davidson's sales are falling through the floor, Polaris Industries (PII 2.95%) reported that its motorcycle sales were down 2% as a result of shutting down production of its Victory brand. Retail demand for the Indian Motorcycle nameplate is still growing, though below the double-digit increases it's been accustomed to.

But Harley is in decline, if not freefall. It hasn't been able to staunch the bleeding on its bread-and-butter motorcycles, is shutting down production facilities, and is laying off workers, yet it wants to introduce an electric motorcycle now. In reality, that's a completely different kind of motorcycle than what it's known for and something few people have really been demanding from the bike maker.

Harley-Davidson has also forecast more pain for the immediate future, with shipments of new bikes to dealers expected to decrease another 4% in 2018, down to as few as 231,000 motorcycles. Those are numbers not seen since 2011, when it was just coming out of the recession. If sales keep falling at their current rate, it might have to scale back those numbers even more. Profit margin is also expected to fall, from 12.5% this year to between 9.5% and 10% in 2018.

Unfortunately, with all that's been going on in the industry, Harley-Davidson not only doesn't seem to have learned the right lessons, but it looks like it's also continuing to learn the wrong ones -- meaning its skidding stock price may not be done giving investors some serious road rash.