What used to be crashes are now just bad days.

The Dow Jones Industrials (^DJI -1.56%) finished their worst week in two years with a 666-point plunge on Friday. That was the average's sixth-worst drop ever, and it sparked all sorts of apocalyptic headlines and made investors nervous that an all-out stock market crash could be imminent. Yet while there's no guarantee that the stock market won't lose more ground, one thing you have to remember is that big point moves like what we saw on Friday just don't mean as much as they used to back when the Dow traded at lower levels.

Take a look at the chart below, which reveals the 10 biggest point declines for the Dow, along with their percentage moves. (Click here to enlarge.) 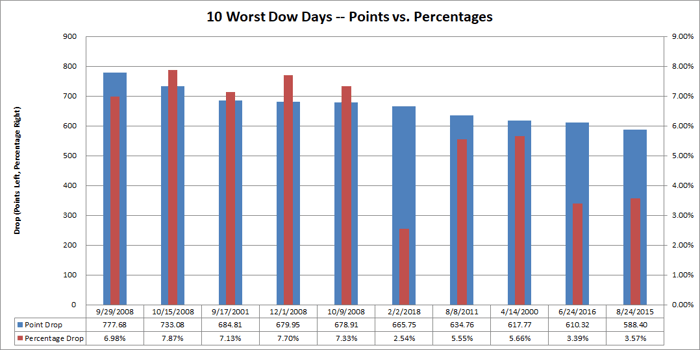 Friday's drop ranks in the top 10 in terms of the number of points lost. But 666 points worked out to barely 2.5% at the Dow's high levels above 25,000, and that move is less than a third of some of these similar-sized point declines when measured in percentage terms.

Moreover, smaller point moves have sometimes had a much bigger impact. The Dow's drop in the 1987 market crash was "only" 508 points, but with the Dow having started the day at around 2,250, that represented a drop of more than 22%.

Investors have gotten used to thinking of triple-digit moves in the Dow as being a big deal. But given how high the stock market has climbed, even a 666-point move isn't nearly as large in percentage terms as it used to be.