The mobile economy continues to take over the world. Here are three stocks to let you take advantage of it.

Ten years ago, an app was something you got at a restaurant before your entree. Today, it's the center of a $5 trillion industry. Mobile apps (short for applications) have revolutionized computing, taking it from mouse clicks to touch screens, and have spawned a multi-trillion dollar economy for developers, start-ups, and tech giants along way.

Not surprisingly, the most popular mobile apps often belong to the most successful companies, as technical performance, ease of use, and utility are key criteria for apps to get downloaded onto billions of smartphones around the world.

With global time spent on apps expected to increase from 1.6 trillion hours in 2016 to 3.5 trillion in 2021, it's no surprise investors are hungry for a piece of the space. 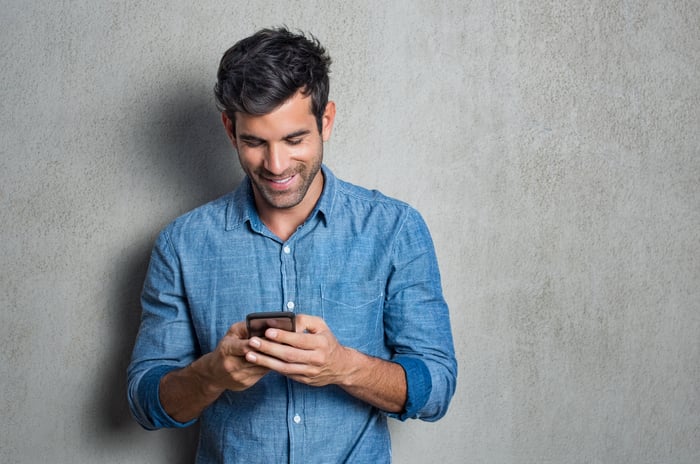 So many publicly traded companies depend on their apps to compete in today's market. Beyond tech companies, apps are key for banks, retailers, airlines, hotels, restaurants, and industries. Even segments that once operated smoothly offline, like transportation and video entertainment, have been disrupted by app-based brands like Uber and Netflix.

Apple's (AAPL 1.62%) iOS and Alphabet's (GOOG -0.27%) (GOOGL -0.21%) Android dominate the market in smartphone operating systems. But despite Android's much larger market share, developers make apps for iOS first and then Android second -- iOS users have higher incomes, so they're more likely to pay for apps; it's easier to design for iOS because there's a limited number of devices that use the software; and apps are safer inside iOS.

That advantage is a key driver of Apple's huge profit margins, as app-related services have grown into a significant revenue stream to complement the sale of its devices. But Apple isn't the only one benefiting from the app economy -- the owners of the most popular paid and free apps are also raking in cash from mobile.

The chart below shows some of the stocks that are thriving from the app economy.

As the king of the App Store, Apple has made quite a killing from the mobile economy. In the most recent quarter, services revenue, which is derived largely from in-app payments and its own apps like Apple Music, increased 34% from the previous year to $8.5 billion, making it the company's largest segment after the iPhone. Increasingly, Apple's focus has been leveraging its installed base of devices to grow its services business through in-app purchases and tangential business like Apple Music, iTunes, and its expected upcoming television service.

With its Android platform, Alphabet has built out its own impressive app-driven business. Android apps collected $27 billion in sales in 2016, and like Apple the company keeps 15% of app-based sales, giving it a multi-billion-dollar revenue stream. Outside of Android, Alphabet also owns some of the most popular apps in the world, including YouTube, Gmail, Google Maps, and Google Docs, which have burnished its advertising business. YouTube, for example, has 1.5 billion monthly users, and claims that its users watch more than an hour a day on mobile devices. The company does not break out YouTube financial results, but the high monetization rate of video ads makes that another valuable revenue stream.

No one dominates the app game like Facebook. The social media giant owns three of the top five apps in the app store, and has three apps with a billion users or more, with Instagram likely to become the fourth sometime this year. While mobile gave the company headaches in its early public history, it has now mastered mobile advertising, which has become the primary driver of its business. In its most recent quarter, 89% of its advertising revenue came from mobile, and it's leveraged that expertise to build businesses out of native app brands like Instagram -- and should eventually do the same with Whatsapp. As long as people are using their phones to communicate, Facebook should remain a winner.

Snapchat-parent Snap owns the fourth-most popular app on the App Store, which, like Instagram, is a mobile-only app based around the camera, allowing users to post photos with different lenses and record video that's collected into stories. While Snapchat is the rare social media company that has actually mounted a challenge to Facebook, gaining popularity with teens and young adults, the company has lost momentum as Instagram has co-opted many of the features that made it unique. Growth is slowing, and the company is struggling to demonstrate its value to advertisers, who prefer Instagram.

Match Group may not have one of the top downloaded apps on the App Store, but the company, thanks to mobile-first Tinder, is remaking the online dating industry. Its swipe-based method of matching potential daters has made Tinder the #1 dating app and driven strong growth for the company as it continues to monetize Tinder with add-ons like Tinder Boost, Tinder Plus, and Tinder Gold. The company and its other apps, like OkCupid, PlentyofFish, Match, and dozens more, should continue to grow as online dating becomes more popular.

Finally, Paypal has long been the leader in mobile payments with more than 200 million active accounts. Its acquisition of Venmo has also proven key, becoming a favorite among millennials for allowing quick, fee-free payments to split restaurant checks, pay rent, or reimburse other expenses. In its most recent quarter, the company said mobile payments rose 53% to $48 billion driven by strong engagement during the holiday season. As mobile payments become more convenient, Paypal likely has a long tail of growth ahead of it.

Of the group above, three of the stocks stand out from the rest for their strength in mobile apps. Facebook, Paypal, and Match Group also seem to have long tails of growth in front of them as the app economy inevitably expands. Those three companies are all leaders in their own mobile segments -- social media, payments, and dating, respectively -- and all three have been able to deliver fat profit margins because of that strength.

Apple's services revenue should continue to grow, but there's a greater risk for the company: the iPhone's maturity and slowing growth. Alphabet's fortunes seem more dependent on its ad economy rather than its apps, and Snap seems like it will continue to struggle to compete with Facebook and Instagram for advertisers and users.

If you're looking to capitalize on the growing app economy, Facebook, Paypal, and Match Group look like the most promising bets here.