Shares tumble on a slow news day. What's going on?

Shares of Alkermes (ALKS 2.08%), a commercial-stage biopharmaceutical company focused on diseases of the central nervous system, fell 11% as of 3:56 p.m. EST on Monday. However, the company didn't release any news that would help to explain it. Instead, it's likely related to a similar decline in Nektar Therapeutics (NKTR -4.29%).

News reports have been swirling over the last few days that Nektar Therapeutics is looking to sell itself. Nektar's shares soared on Friday afternoon when the rumor first hit the wires. The jump in Nektar also caused Alkermes' stock to spike. 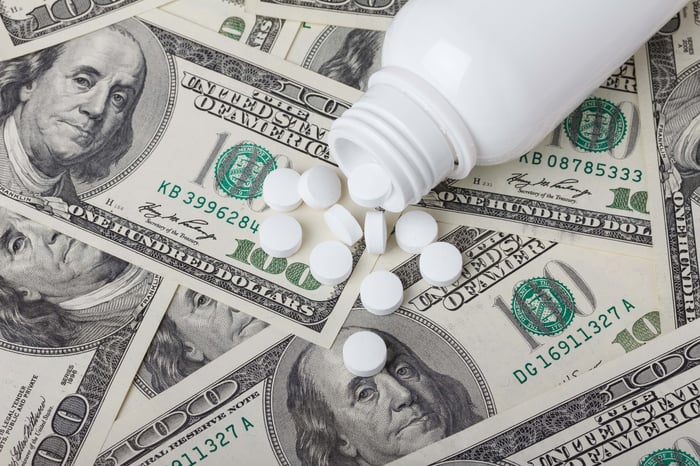 What does Nektar's potential sale have to do with Alkermes? Nektar's lead compound is called NKTR-214, which is a potential treatment for a few different types of cancer. Alkermes also boasts a cancer drug in its pipeline that works based on the same mechanism of action as NKTR-214, so Wall Street bid up shares on Friday on the hope that Alkermes might be an acquisition target, too.

However, Nektar's stock -- along with the entire biotech industry -- took a big hit in afternoon trading today. That weakness appears to have spilled over to Alkermes' stock.

Short-term price movements aside, Alkermes' shareholders look poised to have an exciting 2018. Wall Street currently projects that sales of Vivitrol and Aristada will drive double-digit revenue growth for the company. The jump is expected to allow Alkermes to turn a profit for the full year, which is a favorable turn of events.

What's more, Alkermes just submitted a new antidepressant to the Food and Drug Administration for review in late January. A go/no-go decision should be in hand by the fall. Two other pipeline drugs -- a possible schizophrenia drug called ALKS 3831 and a multiple sclerosis drug called ALKS 8700 -- should have phase 3 readouts later this year as well.

All in all, the bull thesis for owning Alkermes' stock continues to appear on track. Opportunistic investors might want to view today's weakness as a nice chance to buy a strong biopharma company at a discount.