Please ensure Javascript is enabled for purposes of website accessibility
Log In Help Join The Motley Fool
Free Article Join Over 1 Million Premium Members And Get More In-Depth Stock Guidance and Research
By Leo Sun - Feb 6, 2018 at 10:33AM

Bitcoin is overrated, but these three stocks aren’t.

As cryptocurrency prices surged over the past year, the market has been flooded with dangerous crypto-related investments. Tiny companies added "blockchain" to their names and "pivoted" their businesses toward cryptocurrencies, causing their stock prices to soar overnight. Initial coin offerings (ICOs) attracted investors with promises of new cryptocurrencies, but many were outright scams. Other investors bought bitcoin and other cryptocurrencies at their highs, and were bruised by double-digit losses within a few days.

The market hasn't yet decided if cryptocurrencies are an emerging asset class or a massive bubble, but there are still some safe ways to ride this wave with minimal risk. Today, I'll explain how semiconductor foundry TSMC (TSM -5.81%), GPU maker NVIDIA (NVDA -4.20%), and blockchain leader IBM (IBM -0.05%) can provide investors with healthy exposure to the crypto market without outsized risks. 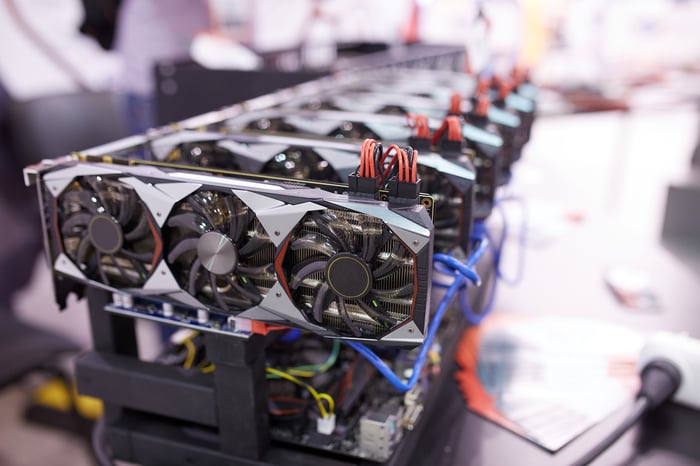 TSMC is the world's largest independent chip foundry. It makes chips for most of the fabless semiconductor companies in the world, including Apple, Qualcomm, NVIDIA (NVDA -4.20%), and AMD.

Smaller cryptocurrency miners use high-end GPUs from NVIDIA and AMD to do their mining. Bulk orders from these miners caused a shortage of NVIDIA and AMD's high-end GPUs over the past year, and both chipmakers have been placing higher orders with TSMC to fill the supply gap.

But that's not all. Larger cryptocurrency miners, particularly those that mine bitcoin instead of alternative cryptocurrencies, use dedicated mining machines powered by ASICs (application-specific integrated circuits) instead of GPUs. The biggest vendor of ASIC machines is Bitmain, and TSMC produces its chips.

TSMC doesn't disclose how much revenue it receives from each customer. But during the third quarter conference call, co-CEO Mark Liu told investors that the company had received "$350 million to $400 million" in revenues from crypto miners, which would be equivalent to 4%-5% of TSMC's top line. It's widely assumed that most of that revenue came from Bitmain.

TSMC didn't disclose its crypto revenues again during the fourth quarter call, but CFO Lora Ho attributed the company's 10% sequential sales growth during the quarter to "major mobile product launches and continuing demand for cryptocurrency mining." Therefore, TSMC not only remains a great all-around play on rising chip sales worldwide, but it's also a conservative way to profit from the cryptocurrency boom.

During the third quarter of 2017, NVIDIA reported that it had generated $70 million in cryptocurrency-related revenues, which accounted for just 3% of its top line. However, that represented a 53% sequential drop from $150 million in the second quarter, and indicated that demand for the GPUs -- which are mainly used to mine alternative cryptocurrencies -- was leveling off. CEO Jensen Huang noted that crypto-related revenues were "small for us, but not zero" during the conference call. 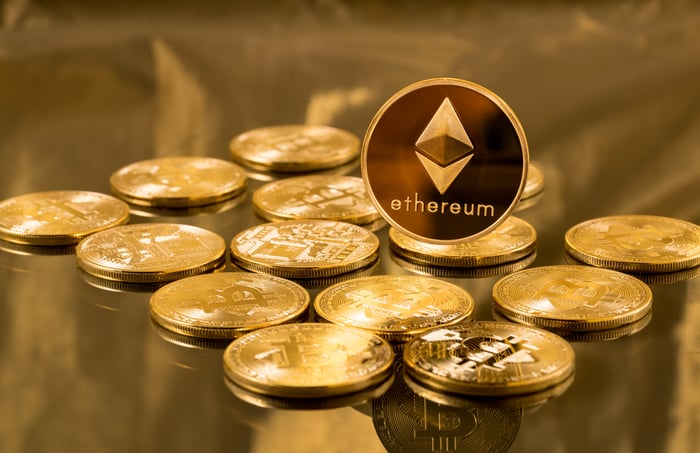 Meanwhile, NVIDIA's gaming GPU revenues rose 25% annually to $1.56 billion, or 59% of the chipmaker's total revenues for the quarter. Therefore, even if cryptocurrencies lose their luster, declines in crypto-related sales would be easily offset by sales of GPUs for its core gamers.

NVIDIA is also posting impressive growth in the data center market, where its high-end Tesla GPUs are being used for machine learning purposes, and connected cars, where its Tegra CPUs power infotainment, navigation, and driverless systems in high-end vehicles. That's why analysts expect its revenue and earnings to respectively rise 37% and 64% for the full year.

Last but not least, IBM remains a reliable play on blockchain, the decentralized ledger technology which powers bitcoin and other cryptocurrencies. Last September, Juniper Research ranked Big Blue as the blockchain market leader, with 40% of tech executives citing it as their top pick. Only 20% picked Microsoft, IBM's closest blockchain rival.

For IBM, the development of blockchain is yet another investment in its five strategic imperatives -- cloud, analytics, mobile, security, and social technologies -- which is gradually offsetting the weakness of its legacy IT services, business hardware, and software businesses.