Shares of the DIY soda maker sold off on the news, but the deal could make it a more appealing acquisition target.

In a deal few saw coming, Keurig, the king of coffee pods, is swallowing up Dr Pepper Snapple (DPS).

The merger combines two of the leaders in hot and cold beverages, bringing brands like 7UP, A&W, and Sunkist, as well as Dr Pepper and Snapple, into Keurig's distribution pipeline. Keurig was taken private by JAB Holding in 2016, a privately held German company that has gone on a run through the coffee industry, taking over brands like Krispy Kreme, Caribou Coffee, and Peet's Coffee, in addition to Keurig. Last year, JAB also bought the bakery/cafe chain Panera Bread.

The Dr Pepper Snapple deal, however, represents JAB's first big move into cold beverages. Management said the merger would lead to $600 million in synergies by 2021 and sets up "an opportunity to combine hot and cold beverages and create a platform to increase exposure to high-growth formats."

The news pushed down shares of rivals including Coca-Cola (KO 0.59%), Pepsico (PEP 0.98%), Starbucks (SBUX 2.98%), and SodaStream (SODA) as rival soda companies like Coke and Pepsi would seem to have the most to lose from the deal.

While SodaStream shares fell as much 3% on the news, the merger could in fact make the DIY soda company more attractive as an acquisition target, enticing the beverage giants to look for a new partner. 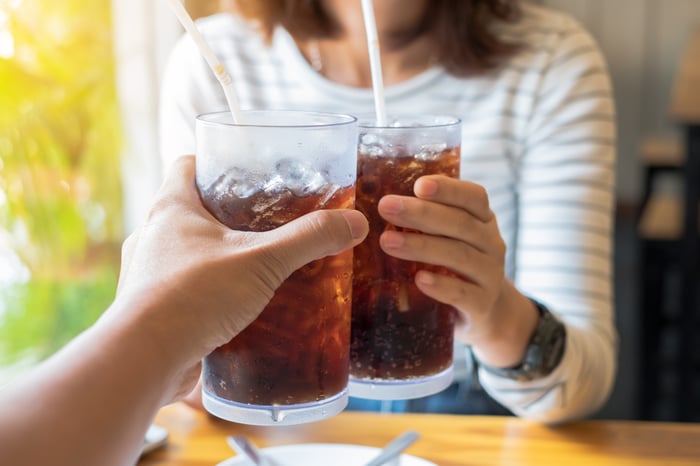 Considering JAB's shopping spree in recent years and its new interest in cold beverages, it wouldn't be surprising for the company to make a play for SodaStream, which trades at reasonable P/E valuation of 27. Combining SodaStream with Keurig Dr Pepper, as the new company will be known, would make Keurig Dr Pepper the dominant player in the countertop beverage market and give SodaStream users a portfolio of well-known beverage brands, increasing sales.

As a German company, JAB may also have better understanding of SodaStream's market potential as Germany is the company's biggest market. More than half of the soda maker's sales come from western Europe, and SodaStream has reached more than 16% household penetration in Germany, showing the possibilities for the American market. Sparkling water tends to be more popular in Europe than in the U.S., which may explain the discrepancy. Yet with water already gaining beverage market share in the U.S., and the power of Keurig Dr Pepper's distribution and its marketing muscle, as well as increased operating efficiencies, the new company could likely drive market share and sales gains if it took over SodaStream.

Coca-Cola or Pepsi would seem to be the most natural buyers for SodaStream. Both companies are struggling with the decline in soda sales and the backlash against sugary drinks, and would likely benefit from a sparkling water, home-based platform like SodaStream, which has been able to deliver consistent growth. Previously, Coke had taken a stake in Keurig Green Mountain, combining to make the Keurig Kold, which flopped due to its high price tag. However, that move signaled Coke's interest in the countertop soda maker market, and it may want another crack at the growing segment.

At one point in 2015, SodaStream seemed to be cozying up to Pepsi as the beverage giant made flavors of its namesake and Sierra Mist for SodaStream's countertop machine, but that turned out a short-lived partnership.

SodaStream's advertising campaigns may also present an obstacle to buyout. For years, the scrappy soda maker has taunted Coke and Pepsi for environmental waste -- it's been the focus of many of the company's most memorable commercials. That approach probably didn't rub the potential suitors the right way, however, and it would make SodaStream look hypocritical, or like it was "selling out" if it got taken over by Coke or Pepsi. The soda giants may also just feel like the countertop market is too small to bother with, especially after the failure of the Keurig Kold.

If a tie-up between Keurig and Dr Pepper works, a combination between Starbucks and SodaStream would seem to make just as much sense. Starbucks has already entered into the at-home coffee-brewing market with Verismo, its Keurig competitor, and grabbing a share of the growing sparkling water market could help the company shore up flagging sales in the U.S., as its cafes appear to be saturating the market once again. The company has had success outside of its stores with its bottled frappuccino drinks, so a combination with SodaStream wouldn't be so strange.

Rumors back in 2014 that Starbucks would take a stake in SodaStream even sent the soda maker's shares momentarily higher, though the rumors turned out to be just fluff.  Still, if Starbucks feels threatened by the JAB-Keurig-Dr Pepper combo, a play for SodaStream would make sense.

SodaStream's brief sell-off seems to indicate that investors see Keurig Dr Pepper as a threat to the soda maker, but considering the failure of the Keurig Kold, Keurig seems unlikely to go that route again. Even if it did, SodaStream's pivot to a sparkling water brand likely insulates it from any direct competitive threat like another Keurig Kold, because Keurig Dr Pepper, with its wide brand portfolio, would be more interested in soda making than seltzer.

Keurig and Dr Pepper may be teaming up, but that doesn't mean SodaStream needs a dance partner to succeed. The company has posted consistent revenue growth over the last two years, which has led to an outsized increase in profits thanks to increased manufacturing efficiencies and operating leverage. The stock could bubble higher again when the company reports fourth-quarter results on Feb. 14; it's made a habit of crushing analyst estimates. With healthier beverage trends now in its favor, the stock should have a steady growth path ahead of it.