Find out why the IT services provider is confident in its future.

The technology sector has been one of the key winners from the tax reform efforts that Washington successfully went through late last year. Companies like Cognizant Technology Solutions (CTSH 0.80%) that have significant overseas businesses stood to take massive one-time hits from the bill's provisions, but going forward, the impact of lower tax rates and friendlier treatment of foreign income should more than make up for the immediate tax hit. That's one reason why investors have been optimistic about Cognizant's efforts toward a greater digital emphasis.

Coming into Wednesday's fourth-quarter financial report, Cognizant investors knew that tax reform would be a one-time hit, but they wanted to see signs of underlying growth. What they saw didn't disappoint them, and the company seems poised to keep picking up speed in 2018. Let's look more closely at Cognizant and what its latest numbers mean for its future. 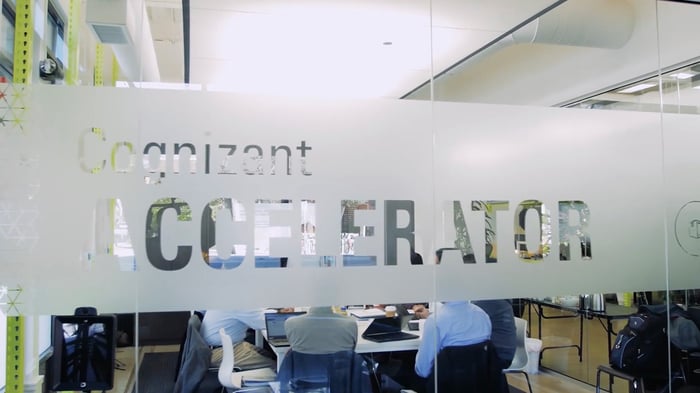 Fourth-quarter results ended the year on a positive note. Revenue gains of almost 11% to $3.83 billion were slightly higher than the numbers most of those following the stock had expected to see. Cognizant posted a small GAAP loss, but after accounting for tax reform and other one-time issues, adjusted operating income of $754 million was up 16% from the prior year's quarter. Adjusted earnings of $1.03 per share topped the consensus forecast among investors for just $0.97 per share on the bottom line.

Tax reform did have a sizable downward impact on earnings. Cognizant said that taxes on foreign earnings accounted for $635 million in charges, and a combination of foreign tax and U.S. state income tax will largely wipe out the smaller benefit that came from revaluing deferred tax liabilities that the company owed.

As we've seen in previous quarters, Cognizant's most impressive growth has come from some of its smaller business operations. The key financial services segment continued to lead the way forward in terms of putting up the most sales, but its 5.4% year-over-year gain was by far the slowest among its peers. By contrast, healthcare revenue rose at a 12% clip. Gains of 14% and 19% for the products and resources segment and the communications, media, and technology business, respectively, capped strong years for both of the smaller segments. Sequential growth overall slowed to 1.6%, with healthcare leading the way forward.

Geographically, Cognizant continued to thrive internationally. North American sales grew just 8.5%, compared to an 18% rise both in Europe and in the company's rest of the world segment. Sluggishness in the U.K. held back Cognizant's top-line growth, but the remainder of the European continent posted breakneck gains of almost 32% to lead the company higher.

CEO Francisco D'Souza was pleased with how the company did. "As companies that are already leaders in their industries integrate their domain knowledge with today's tremendously powerful technologies like artificial intelligence, analytics, and cloud," D'Souza said, "we see a new generation of digital heavyweights emerging." He wants to continue the solid execution strategy that has brought Cognizant success in 2017.

Can Cognizant keep getting better?

Cognizant believes it can become a dominant player even in a crowded market. In D'Souza's words, "Cognizant is resolved to be the go-to partner to these digital-industrial leaders and also to our fast-growing digital-native clients."

The company's guidance was also favorable. For the first quarter, Cognizant expects revenue of between $3.88 billion and $3.92 billion, and adjusted earnings should come in at or above $1.04 per share. For 2018 as a whole, initial guidance includes revenue of $16 billion to $16.3 billion, with adjusted earnings of $4.53 per share. Both sets of figures are on the high side of what most of those following the tech stock expected to see.

Cognizant shareholders were happy with the results, and the stock jumped 6% in morning trading following the announcement. With so much promise in the acceleration toward digital initiatives that enterprise clients across all industry sectors are aiming to achieve, Cognizant has more potential to deliver an even broader array of solutions for its clients.