The pharmacy services giant posted improvement in nearly every category, with a huge planned acquisition in the works.

But there were no hurricanes causing problems for CVS Health when it announced fourth-quarter and full-year 2017 results before the market opened on Thursday. This time around, the company even had a bit of wind at its back. Here are the highlights from CVS Health's fourth-quarter update. 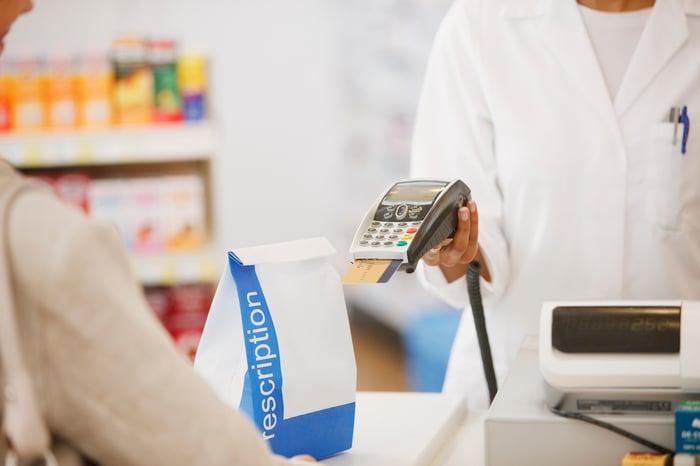 Fourth-quarter sales for the company's retail/long-term care (LTC) segment increased 0.3% over the prior-year period to $20.9 billion. Although this growth was small, it reflected an improvement from the year-over-year sales decline experienced in the third quarter. A 2.5% increase in store prescriptions combined with brand inflation contributed to the modest fourth-quarter gain. However, the retail/LTC segment continued to face challenges from higher generic dispensing rates and reimbursement pressure.

Cold and flu season appeared to provide a boost to CVS Health's fourth-quarter performance. On the other hand, the company reported that front-store same-store sales declined 0.7% in the period, due largely to softer customer traffic.

Recent U.S. tax reform helped make CVS Health's bottom line look better in the fourth quarter. The company said that it recorded a $1.5 billion benefit associated with tax legislation. CVS Health's adjusted EPS also came in at the high end of its guidance range, thanks in part to its effective tax rate in the quarter being lower than anticipated due to some issues being resolved in the company's favor. The PBM's profit growth was within the prior guidance range, but the retail/LTC segment generated profits a little higher than expected.

CVS Health CEO Larry Merlo said, "In 2017, we delivered on the four-point plan we set in place to return to more robust levels of growth. Our position in the evolving healthcare landscape is stronger than ever before, and we remain confident in our model and in our ability to make healthcare more affordable, more accessible and more effective."

We enter 2018 with the foundation to propel us to win across all of our businesses. I'm very pleased with the strong PBM selling season we had, with gross client wins of $6.2 billion, and our retail collaborations are expected to drive solid performance in our pharmacies. I'm also pleased with the progress we've made in providing superior value for patients, payors, and providers, and we look forward to the opportunities ahead to improve upon our progress.

Tax reform should definitely help CVS Health in 2018. The company thinks that reduction in tax expenses should provide an extra $1.2 billion. CVS Health plans to use at least half of its tax benefit on reducing debt. The company also intends to use the money to increase salaries and benefits, invest in data analytics and care management solutions, and pilot new service offerings at its stores.

The biggest thing for investors to watch in the coming months, of course, is what happens with CVS Health's planned acquisition of Aetna (AET). There are both pros and cons to this deal for shareholders. The main question is how regulators will view the acquisition. It's likely that CVS Health will face intense scrutiny.

In the meantime, the prospect of buying Aetna will impact CVS Health shareholders regardless of what regulators decide. CVS Health suspended all share repurchases and isn't hiking its dividend in anticipation of the deal going through.