Calendar year 2017 didn't end particularly well for property and casualty insurer Chubb Corporation (NYSE: CB). Like many of its peers, the company took it on the chin from losses caused by hurricanes Harvey, Irma, and Maria.

Fast-forward to early 2018, and the story changes. The company rocked it in its first reported quarter of the new year -- although there's a catch. 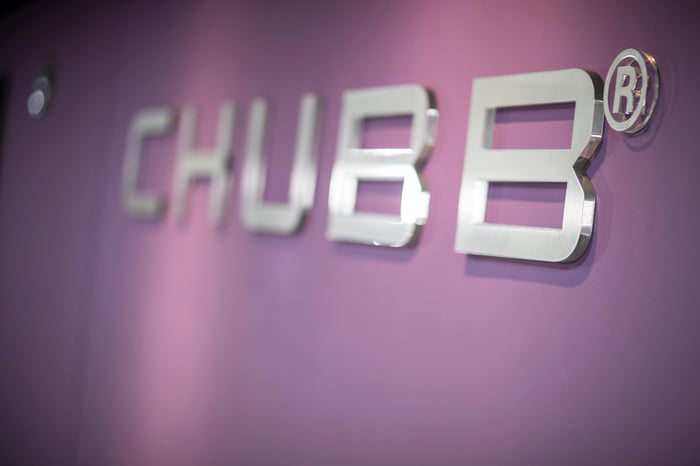 The quarter reported was actually fiscal 2017's Q4. For the period, Chubb's total net premiums written came in at just under $13 billion, which was 1.7% higher on a year-over-year basis. Core (i.e., adjusted) net income was almost $1.49 billion ($3.17 per share), a 16% improvement over Q4 of last year and well above the average $2.29 analysts expected.

One major caveat, though: The latter number was helped greatly by the government's tax reform bill, as Chubb booked a $450 million provisional benefit in anticipation of the changes. Excluding that and another one-time expense, Chubb's per-share core net income would have been $2.28, in line with those estimates.

Although there were no major hurricanes in Q4, the wildfires in California occurred during the quarter, negatively affecting results.

In the wake of the hurricanes, the company managed to raise its pricing for major accounts. That increase wasn't earth-shattering at 1% on a year-over-year basis in Q4, but it does reverse three years of declines. Rates climbed higher in January, which positions Chubb for a decent Q1 of its fiscal 2018.

Meanwhile, the company's policies have lately been producing more income than they've been paying out. Its combined ratio -- basically an insurer's losses and expenses divided by its earned premiums -- was 90.7% for the quarter if catastrophe losses are included (and 86.4% if not). This was a tick higher than Q4 2016's 87.8%.

That 90.7% is quite good when compared with its rivals' combined ratios. In its most recently reported quarter, Travelers (TRV 1.15%) posted a 95.5% combined ratio, while struggling American International Group (AIG 0.44%) notched a monstrous 195.4%. It must be said, though, that AIG's quarter fell within the hurricane period; the previous quarter's figure was a more down-to-Earth 102.7%.

For the entirety of Chubb's fiscal 2017, net premiums written increased by 4% year over year to just over $54.2 billion. Net income declined by almost 20% to $3.78 billion, but that's understandable, given the flurry of natural disasters toward the end of the year. Ditto for the combined ratio for the year, which climbed to 94.7% from 2016's 88.7%. Excluding catastrophe losses, however, the 2017 result was 87.6%.

Insurance wasn't a hot sector on the stock market last year -- natural disasters have a habit of leeching enthusiasm from insurer stocks. Both Chubb and Travelers rose across 2017 but lagged well behind the S&P 500. Beset by struggles, AIG stock ended the year down almost 9%.

Chubb stands a good chance of doing better this year -- assuming, of course, that we don't experience a similar string of catastrophes. Although the company's big Q4 earnings beat wasn't quite what it appeared to be at first glance, its performance was nevertheless encouraging, and its immediate future is looking good. Investors looking at the insurance sector should certainly consider the company's stock.