Hand it to Goldman Sachs: This analyst knows what it likes -- and what it doesn't. This morning, StreetInsider.com (requires subscription) reported that Goldman Sachs has initiated coverage of the insurance sector, announcing ratings on eight top insurance stocks. We don't have time to cover all of Goldman's picks and pans today, but let's at least survey the first three -- Progressive (PGR 1.03%), American International Group (AIG 2.56%), and Travelers (TRV 1.28%) -- and see if we can figure out why Goldman likes them -- or doesn't. 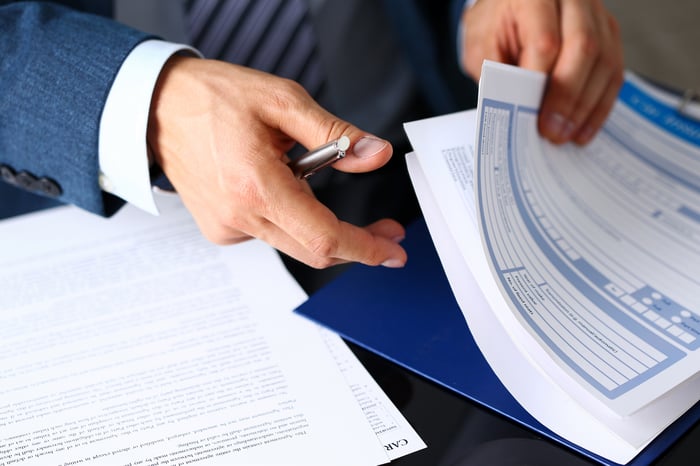 Insurance contracts are complicated. Deciding whether to buy an insurance stock is a lot simpler -- one number can tell the tale. Image source: Getty Images.

Why to buy Progressive

Starting from the top, Goldman's favorite pick in the insurance industry today is Progressive. The nation's fourth-largest auto insurer -- ranked behind State Farm, Geico, and Allstate -- announced in October a $30 million plan to expand its business in its home state of Ohio, where it will be hiring 900 new workers.

Progressive boasts a the property and casualty combined ratio (a key metric when evaluating insurance stocks) of 95.1%, according to data from S&P Global Market Intelligence. That's essentially on par with the performance of Geico (part of Berkshire Hathaway) -- and in fact, 80 basis points better than the Berkshire subsidiary produces. Progressive's P&C combined ratio is 1 full percentage point (100 basis points) better than Allstate's ratio, too. (We can't compare it to State Farm, which is privately owned and doesn't have to disclose all of its performance metrics.)

Why not to buy Travelers

Curiously, though, one of the few insurance stocks rated a sell at Goldman scores an even better P&C combined ratio than any of the stocks named above. At 92%, The Travelers Companies operates a tighter operation than Progressive, Allstate, or Geico -- paying out just 92% in insurance settlements and other costs for every $1 it takes in in premiums.

And yet, as TheFly.com relates, Goldman worries that Traveler's is "experiencing underwriting compression due to rising inflationary trends and weak pricing." Earnings are eroding at this insurer, warns Goldman, and consensus estimates and valuations voiced by other analysts are not to be believed.

When you consider that on average, analysts surveyed by S&P Global think Travelers' profits will grow only 6% annually over the next five years -- barely one-third as fast as Progressive's projected 17.4% growth rate -- that's a worrisome warning that Goldman is giving us. It helps to explain why, even though Progressive stock sells for 22.3 times earnings, and Travelers only 15.2 times earnings, Goldman Sachs thinks Progressive stock is a buy and Travelers stock is a sell.

Hemming and hawing at AIG

Meanwhile, Goldman Sachs doesn't seem to know what to make of American International Group, bestowing upon it a neutral rating. On the one hand, AIG isn't currently profitable, while both Progressive and Travelers are. On the other hand, in most years AIG actually is profitable, and it's projected to become profitable again, and to maintain an 11% long-term earnings growth rate -- right in the middle between buy-rated Progressive's blistering 17%-plus race to growth and sell-rated Traveler's plodding 6% pace.

That middle-of-the road growth rate may one the reason Goldman is waffling between buy and sell on this one. But if you ask me, there's a simple way for Goldman to make up its mind:

AIG's 133.1% P&C combined ratio is currently one of the worst to be found among any of the major insurers. For every $1 AIG takes in in premiums, it pays out more than $1.33 in claims and other costs. That's miserable performance for an insurer. What's more, AIG hasn't turned in a P&C combined ratio below 100 since 2007 -- a full decade of poor performance. Despite this, the most Goldman Sachs can bring itself to say is that it's neutral on AIG, and thinks the stock could still strengthen a bit from its current sub-$60 price to perhaps $61 a share.

That's not good enough for me.

After waiting and waiting for AIG to turn itself around, I finally gave up on it last month and canceled my own buy rating on the stock on Motley Fool CAPS (albeit at a small profit). With one of the worst P&C combined ratios on the insurance block, and no seeming intention of improving it anytime soon, I no longer believe AIG is a stock worth owning.