Please ensure Javascript is enabled for purposes of website accessibility
Log In Help Join The Motley Fool
Free Article Join Over 1 Million Premium Members And Get More In-Depth Stock Guidance and Research
By Matthew DiLallo - Feb 9, 2018 at 10:00AM

The refuse and recycling company will see a big boost this year from the newly lowered U.S. corporate tax rate.

Republic Services (RSG 1.66%), like so many other U.S. corporations, received an unexpected gift at the end of last year when Congress passed the largest overhaul to the U.S. tax code in decades, reducing corporate rates significantly. The change had an immediate impact on the company's fourth-quarter results and helped push earnings above the high end of its guidance range. Republic Services expects an even more meaningful boost this year, which drove it to increase its full-year guidance. 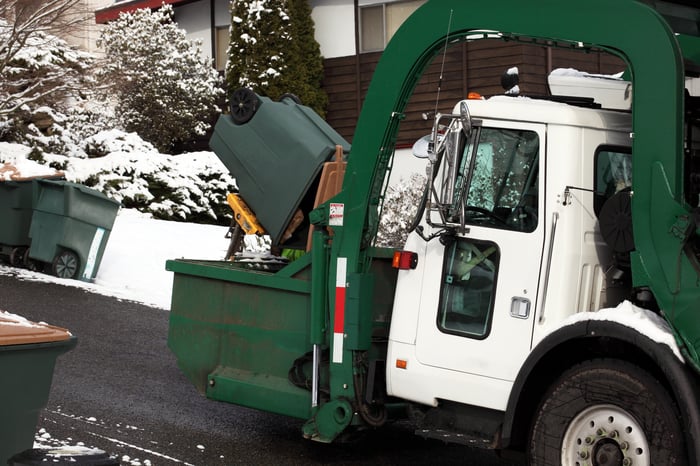 What happened with Republic Services this quarter?

Republic Services benefited from higher prices and volumes as well as lower taxes:

We finished the year strong and delivered full-year results that exceeded the upper end of our guidance range. By continuing to focus on attracting and retaining the best employees and delivering products and services that meet our customers' wants and needs, we delivered high single-digit growth in revenue, earnings and free cash flow per share as well as increased our return on invested capital and cash returned to shareholders. Our solid results continue to reflect positive contributions from effectively investing in the business and successfully executing our strategy of profitable growth through differentiation.

Republic Services finished a strong year that saw the company grow earnings above the high end of its forecast. While the company did get a boost from the new tax plan, it would have exceeded expectations even without that assistance. The company was able to achieve those stronger-than-expected results by working on several strategic initiatives designed to boost profitability. For example, it continued converting customers to contracts with more favorable annual price increases than just inflation-based, while also automating more of its fleet and increasing the percentage of trucks running on natural gas to cut costs.

As good as 2017 was, Republic Services expects this year to be even better. In fact, it sees results coming in well above the rosy preliminary outlook it provided last quarter thanks to the positive impact of the change in the U.S. tax code. The company now anticipates that adjusted earnings will be in the range of $3.05 to $3.10 per share, which would be 27% higher than last year and well above its preliminary forecast that earnings would rise to a range of $2.53 to $2.58 per share. In addition to that, Republic Services expects to generate between $1.09 billion and $1.115 billion in adjusted free cash flow, which would be well above last year's level and its previous guidance range of $925 million to $950 million. The company plans on returning all that cash to investors, with it expecting to pay $450 million in dividends and buy back $775 million in stock.