Please ensure Javascript is enabled for purposes of website accessibility
Log In Help Join The Motley Fool
Free Article Join Over 1 Million Premium Members And Get More In-Depth Stock Guidance and Research
By Jamal Carnette, CFA - Feb 9, 2018 at 8:01AM

Will integrating software and hardware work this time?

Unlike Apple, Alphabet (GOOG -0.40%) (GOOGL -0.47%) doesn't produce an integrated smartphone product. Instead, the search giant has chosen to focus on its strength, its Android operating system, while allowing others -- most notably Samsung -- to focus on the hardware.

There's a slight exception to this arrangement: the Google Pixel phone, for which it works closely with the hardware producer to design the unit. And the company is inching closer to full integration on this front. After announcing its intention to acquire part of Taiwanese consumer hardware giant HTC Corporation last year, Alphabet officially closed on the $1.1 billion deal in late January. 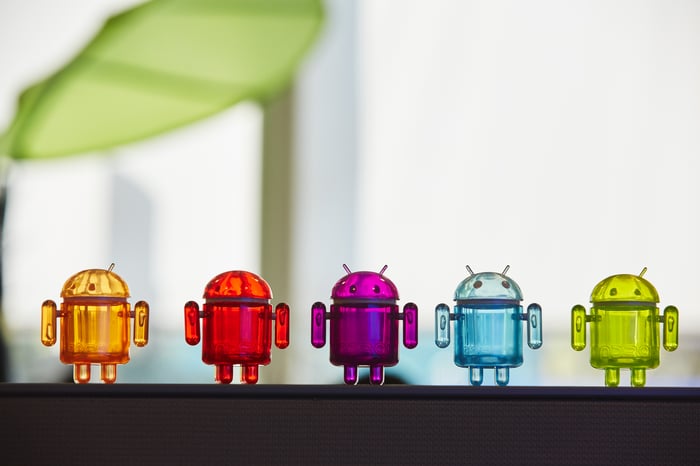 The HTC acquisition is notable in what it includes. In addition to a non-exclusive agreement to license HTC's intellectual property, Alphabet received 2,000 HTC engineers as "acqui-hires," many of whom worked on prior versions of the Google Pixel, and HTC's smartphone development team.

Alphabet hardware executive Rick Osterloh wrote in a blog post, "I'm delighted that we've officially closed our deal with HTC, and are welcoming an incredibly talented team to work on even better and more innovative products in the years to come." Make no mistake: Alphabet is moving toward integrating hardware and software.

Samsung could be the biggest loser

In the post, Osterloh admitted, "building hardware is ... hard." He's particularly correct as it relates to the premium smartphone market. While Alphabet's Pixel phone has received praise from tech reviewers and critics, it has failed to break the flagship duopoly of Apple's iPhone and Samsung's Galaxy line of phones.

A recommitted Alphabet comes at a critical time for Apple. The iPhone maker is facing analyst concerns about its current flagship phone, the iPhone X. Multiple reports from Apple's supply chain point to slowing demand for the phone. In the company's recently reported quarter, the company did sell fewer iPhones than in last year's quarter.

However, it's likely the company with the most to lose from Alphabet's move is fellow Android hardware maker Samsung. In developed markets like the United States, where new phone purchases are mostly refreshes, the lock-in effects of operating systems are strong.

Samsung has benefited from being the de facto premium smartphone of choice on the Android ecosystem. If a more integrated Alphabet leads to a better product, then Samsung is likely to be more affected.

Will HTC be another Motorola Mobility?

It should be noted that Alphabet has attempted to manufacture an integrated smartphone before. In 2012, the company paid $12.5 billion to buy Motorola Mobility. At the time, Google appointed Dennis Woodside to run the division. "Our aim is simple," Woodside said then. "To focus Motorola Mobility's remarkable talent on fewer, bigger bets, and create wonderful devices that are used by people around the world."

Alphabet reversed course two years later, selling much of Motorola Mobility's assets for less than $3 billion, although it kept many of the patents. As for Woodside, he's now the COO of Dropbox.

However, it appears Alphabet has learned from its mistakes and that the current deal with HTC will not be another Motorola Mobility situation. Although it's a step closer to bringing forth a comprehensive smartphone solution, this appears to be a smaller, more strategic bet than the large-scale Motorola Mobility acquisition was.

However, that doesn't mean Apple and Samsung should ignore Alphabet. The search giant has an advantage in the hardware wars because of the asymmetric risk/reward profile in comparison with its peers. Investors of all three companies should watch Alphabet's smartphone and hardware efforts closely.