Please ensure Javascript is enabled for purposes of website accessibility
Log In Help Join The Motley Fool
Free Article Join Over 1 Million Premium Members And Get More In-Depth Stock Guidance and Research
By Daniel B. Kline - Feb 10, 2018 at 5:35PM

The twice-a-year RootMetrics report delivers the same result it has for four-and-a-half years.

Verizon (VZ 0.32%) has built its marketing around its dominance of the twice-yearly Rootmetrics Mobile Performance report. The carrier has been the top performer nationally for nine consecutive reporting periods, and it won or shared the top place in every category covered by the report.

It's a near-clean sweep for Verizon, which gives the company continued fuel for its marketing fire. The results, however, are not without their detractors, as T-Mobile (TMUS 0.75%) CEO John Legere has repeatedly taken issue with the RootMetrics report. 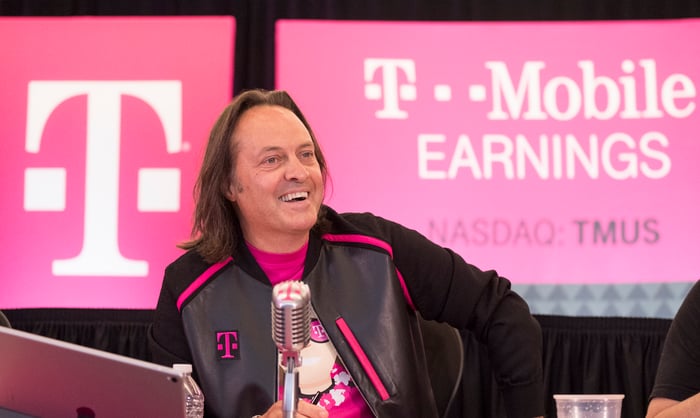 T-Mobile's CEO has been an outspoken critic of the RootMetrics report. Image source: T-Mobile.

A look at the controversy

It's important to note that RootMetrics has publicly stood by its methods and has proclaimed its independence.

T-Mobile, which takes first place honors in a second well-regarded report from OpenSignal, disputes the validity of the RootMetrics report. Legere has said that it's not an independent report, claiming that rival carriers pay RootMetrics millions.

That's a claim the research firm has vehemently denied, saying, "we're dedicated to remaining completely and steadfastly independent when it comes to our methodology for testing and reporting mobile performance," in a 2016 email to Motley Fool. The company also noted that it self-funds its own reports.

A deeper dive into the new report

While T-Mobile is not likely to make a commercial out of RootMetrics findings, the company actually improved on the metro level. That's important, since the report says "metro-level testing provides the strongest gauge of network performance."

Verizon still dominates on the metro level, but T-Mobile is gaining on AT&T for second place. That suggests that the carrier has strong service in many markets, but some holes in its coverage map.

In many ways, all of these reports should be viewed skeptically. That's not because RootMetrics or OpenSignal has faulty tests, it's that no method of testing can account for each person's specific usage pattern. Wireless carriers, no matter what the reports say, are a true example of a situation where your results may vary.

Where you live, how much and where you travel to, and even what kind of phone you use impact how your carrier performs. For most people, any of the four are probably good enough (which is a point Sprint makes in its marketing). Best means different things to different people, and finding the right fit for you likely involves a bit of trial and error.