The Dow Jones Industrials (^DJI -0.86%) have taken a big hit over the past two weeks, including two declines in the past five trading sessions of 1,000 points or more. Even after Friday's bounce, the Dow has fallen over 2,400 points, and its close on Thursday represented more than a 10% drop, meeting the definition of a correction for the average.

What many U.S. investors don't fully realize is that the shock of the U.S. market downturn has been felt around the world. Below, you can see just how much key benchmarks in other countries have fallen over the past two weeks. (Click here to enlarge.) 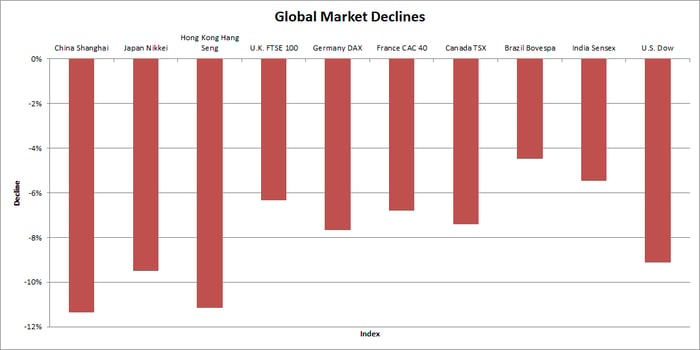 The key message for investors is that the days of a contraction affecting only a single country are now largely over. You might see slight differences in just how much one country pulls back compared to another, but the globalization of the markets means that bad news tends to make itself felt around the world. That makes it important to know how to react constructively when markets dive.