Smartphones are ubiquitous, but new types of devices are gaining ground.

Before Apple (AAPL -1.07%) launched the first iPhone in 2007, the smartphone was considered a niche enterprise device. But the iPhone and devices that followed changed all that, and the smartphone became an indispensable tool for mainstream consumers.

Seventy-eight percent of Americans now own smartphones, according to Walker Sands' 2017 Future of Retail survey, which polled over 1,600 consumers. That technological shift has forced companies across many industries to create better mobile apps and websites, while adopting social media marketing strategies to reach more consumers. 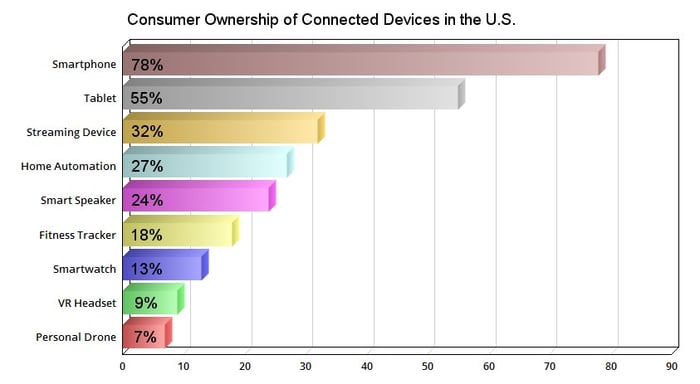 However, the smartphone market has become saturated in recent years. Worldwide smartphone shipments slipped 0.1% to 1.47 billion units in 2017, according to IDC's latest numbers. Now, many companies are turning their attention towards emerging devices like wearables, virtual reality (VR) headsets, streaming TV products, and consumer drones.

None of these newer devices will replace smartphones anytime soon, but they could give companies fresh ways to reach consumers.