The steep fall in Expedia Inc.'s (EXPE -3.29%) stock last Friday had little to do with the weakness in the broader markets. Expedia released its fourth-quarter and fiscal 2017 earnings on Feb. 8 after the markets closed, and investors weren't prepared for what they saw: a 31% drop in the online travel company's fourth-quarter net profit and a 90% jump in its negative free cash flow (FCF), year over year.

There's more to Expedia's story than what the headlines tell, though. Expedia's gross bookings continue to trend higher, vacation rentals is adding solid value to its portfolio, and management has some big plans to gain headway into the $1.6 trillion industry.

There are a couple of points to note here before we delve deeper into the numbers.

Gross bookings is a key operating metric widely used by travel companies like Expedia and Priceline Group. It represents the total value of transactions, generally inclusive of taxes and net of cancellations, booked by customers during a period. Higher gross bookings indicate that more travelers are making their travel arrangements (flights, hotels, etc.) online.

Expedia recognizes revenue for most of its travel products when the travel takes place, which means its revenue typically lags its bookings by several weeks. 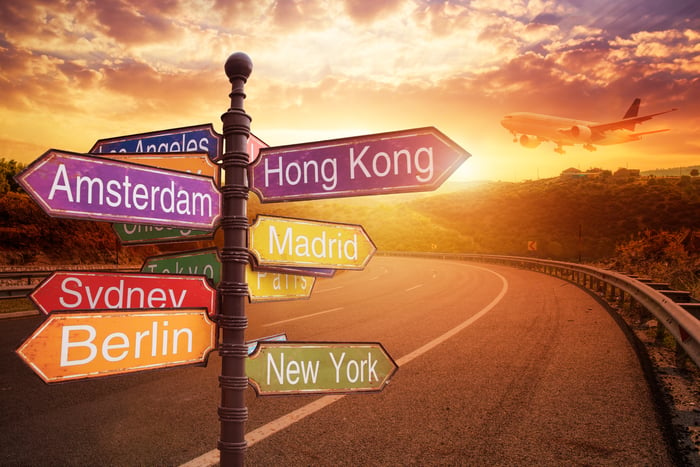 What happened with Expedia this quarter

Expedia witnessed broad-based growth during the fourth quarter. Unlike Priceline, which derived nearly 75% of its revenue from the "agency" business model during the nine months ended Sept. 30, 2017 -- in which it simply acts as an agent that facilitates bookings (primarily through Booking.com) in exchange for commissions or fees -- Expedia operates a more diverse portfolio. In fiscal 2017, Expedia derived roughly 52% of its revenue from the "merchant" business model, in which the company itself becomes a merchant as it buys hotel rooms and flight seats for discounts and resells them.

In Q4, Expedia's year-over-year revenue from merchant and agency models climbed 10% and 11%, respectively.

For investors, it may be more important to see Expedia's segment-wise break-up to understand which products and services are driving growth. The table below shows Expedia's fourth-quarter gross bookings by segment.

Here's a quick look at what the three segments include:

Expedia also owns a majority stake in trivago and reports revenue from it separately.

As the table above shows, all of Expedia's segments are performing well. HomeAway, which the company acquired in 2015, continues to be a significant growth driver as Expedia is transitioning the business from a subscription-based to a commission-based model. In other words, instead of earning subscription fees from owners of properties listed on the portal, HomeAway now charges a commission from the property owner and a service fee from the traveler on a transactional basis. This model should ring in higher profits in the long run.

So why did Expedia's profit drop despite higher revenue in Q4? Expedia's total operating costs climbed 16% year over year as the company spent more on data centers, technology, selling, marketing, and increasing its headcount as it expands its footprint. Most of these expenses, especially advertising and marketing, are core to an OTA's business, which means investors shouldn't read too much into the drop in Expedia's Q4 net income.

CEO Mark Okerstrom is bullish about Expedia's prospects, and believes that it is "firmly on a path toward faster growth and greater share gains in the $1.6 trillion travel industry." Providing further insight, Okerstrom said:

We are now operating with a clear focus on our highest priority markets, making concentrated investments across the platform including a step function change in our pace of adding new properties to our marketplace. These efforts combined with the impact of our ongoing cloud migration result in expectations for full year 2018 adjusted EBITDA growth of 6% to 11%.

To clarify, adjusted EBITDA is earnings before interest, tax, depreciation, and amortization, further adjusted for non-cash items such as restructuring and acquisition costs.

If anything at all, Expedia's Q4 report confirms that the company is firmly on the growth track.

During Expedia's earnings call, Okerstrom highlighted how Expedia intends to double the number of properties in its core OTA platform in 2018, with HomeAway leading the pack. For perspective, Expedia's core OTA lodging portfolio expanded 69% from 2016 and crossed 590,000 properties as of Dec. 31, 2017, including 150,000 HomeAway listings.

Long story short, investors might be better off ignoring the headlines and focusing on Expedia's promising long-term growth story instead.