The online travel agency (OTA) sector has taken a sudden plunge toward Earth. Market darlings until only a few months ago, the top stocks in the industry started to head south after they disappointed in various ways in their most recently released quarterly results.

Case in point: Expedia (NASDAQ:EXPE)fell by 13% in October, the month when it released a dispiriting set of Q3 figures. But has it lost enough altitude to be in bargain-stock territory? Is it a buy at this weakened price? 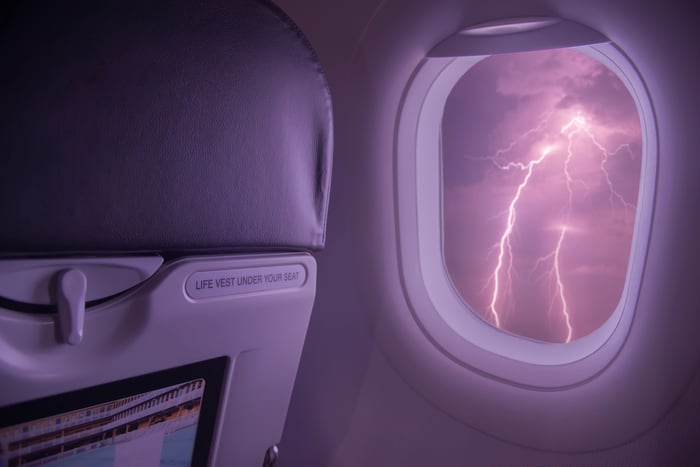 Advertise, and they will book

Although there was growth on both the top and bottom lines for Expedia in the quarter, neither line item met analyst projections. The former rose by 15% on a year-over-year basis to $2.97 billion, on gross bookings that increased 11%. Adjusted net profit also advanced, by 7% to almost $399 million, or $2.51 per share. Yet the average prognostication was for $2.98 billion in revenue and EPS of $2.62.

On top of that, the company trimmed its guidance for full-year 2017. It now believes EBITDA will grow in the mid- to high-single-digit percentage, down from the previous estimate of 10% to 15%.

The misses were due partially to one major factor that affected not only Expedia but also peers Priceline Group (NASDAQ:BKNG), TripAdvisor (NASDAQ:TRIP): marketing expenses.

OTAs are generally middlemen that match travelers with the services they need for trips. Brand loyalty is low in this game; customers are generally on the hunt for bargains and/or the perfect hotel or flight for their travel ambitions. Whether they get what they want from Expedia, Priceline, TripAdvisor, or their retired travel agent friend Henry makes little difference.

So it can be a real fight for the customer's attention. Most of the major OTAs on the market either increased their marketing spend in their most recently reported quarters or said they're planning to do so in the proximate future.

Priceline, for instance, devoted nearly $1.2 billion to performance advertising in its Q2, 25% higher on a year-over-year basis. Expedia's selling and marketing costs rose by 21% in its Q3; that line item for TripAdvisor increased 18% in its most recently reported quarter.

Marketing expenses should continue to be relatively high for OTAs. After all, if the guy next to you is increasing his spend, you'd better open your wallet, too.

But these estimate misses, higher-than-desired marketing expenses, and guidance cuts obscure some very positive factors. Chief among these is that all of the mentioned OTAs delivered convincing growth on the top line.

And the future looks good. An analysis from eMarketer estimates that the world's hunger for travel is far from satisfied, and this hunger will largely be fulfilled online. It's projecting a 45% expansion in the sales of digital travel services between 2016 and 2020, to over $817 billion. Other prognosticators are also estimating robust growth over the next few years.

Certain analysts believe Expedia is very well poised to take advantage of this situation. Morningstar's Dan Wasiolek pointed out in October that "[o]ver the past two decades, Expedia has built a strong network of properties ... which has driven strong end-user traffic and bookings." Wasiolek believes that this "strong network effect" will boost the company's share of global bookings from the present 6% to 9% over the next decade.

Expedia has established, well-performing brands that are widely known amongst travelers, casual and otherwise. I think it'll remain a top online destination for all manner of tourists, and I buy Wasiolek's argument that it'll be able to gobble up more of the market. As such, I wouldn't be worried about short-term disappointments like the Q3 results, or the diminished 2017 guidance. I would absolutely buy on the share-price dip now.