This is the year esports and in-game ads will start to contribute to the game-maker's financial results.

Top video game company Activision Blizzard (ATVI 1.90%) had a great 2017, with the World of Warcraft maker generating record revenue. Activision proved in 2017 that it can keep revenue and profits up even in a light year for new game releases. Spending for add-on content, which makes up the majority of the company's annual revenue, was strong all year for existing franchises, especially within Call of Duty and Overwatch.

Looking to the year ahead, management plans to build on that momentum with esports and in-game advertising. These new opportunities set up Activision for its best year yet. 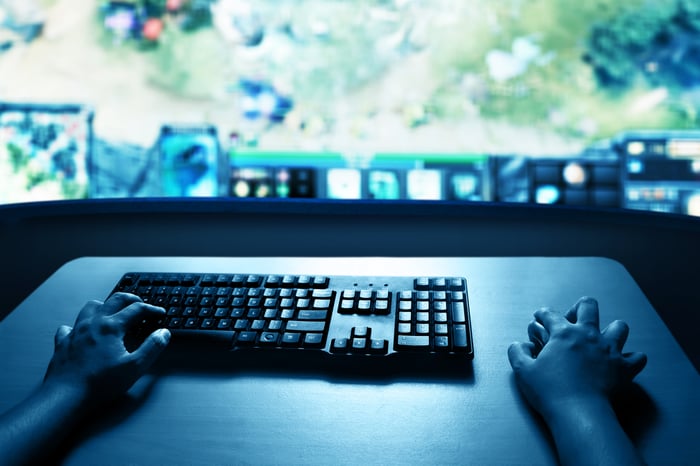 Esports will be in the spotlight

Over the last year, there's been skepticism leading up to Activision's recently launched professional esports event, Overwatch League. One of the main reasons for the skepticism was the potential difficulty in watching a game that moves at a fast pace. Plus, there has never really been an esport like Overwatch League before, which makes it challenging to quantify the impact it will have on Activision's financials over the long term.

These concerns are important because, well, the stock is starting to touch nosebleed territory, trading for a P/E ratio of 45 times trailing earnings per share. These growth opportunities outside of making games are crucial to justifying the stock's relatively high valuation.

Those worries may have been put to rest for now, based on strong viewership for opening week, and the sponsors Activision signed up subsequently. Overwatch League generated 408,000 views per minute on Twitch on opening day, and that brought Toyota Motors, T-Mobile, and Sour Patch Kids into the fold as official sponsors, to go along with HP and Intel.

More important, this viewership has drawn the interest of potential owners who want to buy teams, which will allow the company to increase the price for those new teams in the future. The first 12 teams reportedly sold for as much as $20 million each, according to The Wall Street Journal.

Additionally, management believes 2018 will be the year esports becomes even more broad in its appeal. The esports audience worldwide is projected to expand to nearly 600 million in the next few years, and Activision looks to be in a great position to capitalize. One of the main goals with Overwatch League is to generate excitement around the Overwatch game itself, and stimulate more in-game spending, which has taken the place of new game sales as the key driver of the company's revenue and earnings growth.

The game developer King is already a significant contributor to Activision's bottom line, having generated 30% of the company's non-GAAP operating income in 2017. But there's a lot of untapped potential for King to grow this percentage.

King plans to release more games and content in 2018 and beyond, and it has a big tailwind. Sales of mobile games are expected to grow 14% per year through 2020 to reach $65 billion. What's more, total spending in mobile games is expected to exceed $105 billion by 2021, according to App Annie.

The big development to watch at King in 2018 is in-game advertising. It has been testing in-game ads for a while and will finally launch ad products on a larger scale this year. Analysts estimate King could generate as much as $1 billion in revenue from mobile ads over the next few years, according to Business Insider.

Overwatch League and King's advertising efforts will be two key growth initiatives that investors will watch closely as we move through 2018. Of course, there will also be the usual content expansions for existing games to drive growth for in-game spending, as well as another Call of Duty game being released in fall 2018, which management expects to continue to drive growth for the franchise.

Activision finished 2017 posting growth in revenue of 6.1% and a slight increase in non-GAAP earnings per share. That was with no new releases from the Blizzard segment, which faced a tough comparable over 2016 with that year's launch of Overwatch and a major World of Warcraft expansion.

Management expects another year of growth in 2018 based on its early guidance for revenue to grow 4.7% to $7.35 billion and non-GAAP earnings per share to grow 10.8% to $2.45. Investor optimism has sent the stock price up 68% over the last year, based on the expectation that other opportunities outside of making games will pay off in the long run. This is the year esports and in-game advertising will kick in, which -- if they show solid early results -- will make 2018 Activision Blizzard's best year yet.