China's online search leader exceeds the high end of its top-line guidance for the fourth quarter, and its guidance suggests that accelerating growth might continue.

China's leading search engine is getting back to basics, and the strategy is paying off with its best growth in a couple of years. Baidu (BIDU -0.95%) reported financial results shortly after the market close on Tuesday, clocking in with revenue that topped the high end of its earlier guidance and its bottom line growing even faster, after adjusting for a one-time gain a year earlier.

Revenue rose 29% to hit $3.62 billion for the fourth quarter, and the growth would be slightly higher if you back out the mobile gaming and Baidu Deliveries units it unloaded over the past year. Baidu was targeting $3.34 billion to $3.52 billion on the top line for the quarter in late October. The revenue growth rate matches the 29% it posted last time out, its headiest gains since late 2015.

Operating margin continues to improve, with Baidu's operating profit more than doubling on both a reported and an adjusted basis. Adjusted earnings rose to $2.29 a share. Back out a one-time gain resulting from Baidu's exchange of Uber China shares with Didi, and Baidu would've earned just $0.93 a share a year earlier. 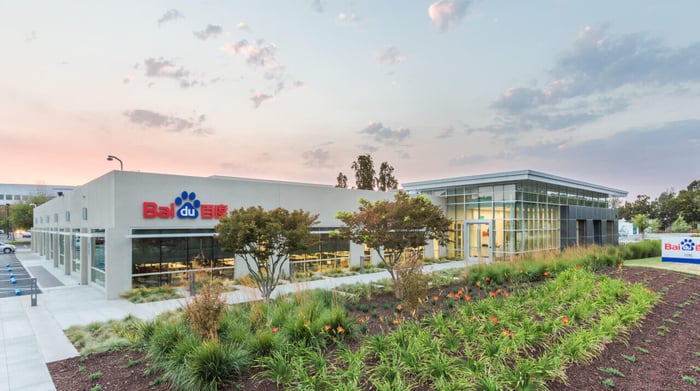 It isn't a surprise to see Baidu growing at its fastest rate in two years. The year-over-year comparisons were depressed for five quarters beginning with the second quarter of 2016, after regulators insisted that all Chinese search portals scale back on the posting of high-paying medical-related sponsored listings. We've now had back-to-back periods where the comparisons are more fair, but even then it's not completely an apples-to-apples match, since Baidu sold off its food delivery and mobile gaming units in 2017.

Search and the online advertising opportunities it offers continue to be the needle-mover at Baidu. Online marketing revenue -- accounting for 87% of its top-line results -- rose 26%, as a 2% increase in the number of advertisers was helped out by a 25% increase in the average spent per marketing customer. This is the first time since Baidu deliberately started culling its list of controversial and low-quality advertisers in early 2016 that we've seen the number of marketing customers expand since the prior year.

Baidu is focusing on its search business, and it plans to continue exiting its non-core businesses outside of the big investments it's making in mobile and artificial intelligence. It's hoping to take its growing yet margin-squeezing iQiyi video-streaming platform public later this year, but it's also not afraid to make big bets like the $1.5 billion it's earmarking for a fund dedicated to autonomous driving.

Guidance for the current quarter opens the door for accelerating top-line growth. Baidu's eyeing $3.05 billion to $3.22 billion in revenue for the first quarter, 25% to 32% ahead of the prior year's showing. Back out the businesses disposed in 2017, and the outlook becomes a 29% to 36% increase. Baidu doesn't offer earnings guidance, but the iQiyi IPO, once completed, should help on that front. The Chinese dot-com darling is growing nicely on both ends of the income statement, and leaning on its search cash cow to bankroll investments in artificial intelligence should pay off in the future.