Please ensure Javascript is enabled for purposes of website accessibility
Log In Help Join The Motley Fool
Free Article Join Over 1 Million Premium Members And Get More In-Depth Stock Guidance and Research
By Joe Tenebruso - Feb 13, 2018 at 8:48AM

The hard-charging telecom company's subscriber growth left its competitors in the dust in the fourth quarter.

T-Mobile US (TMUS 1.69%) is closing the gap between itself and its larger rivals, as evidenced by its strong fourth-quarter results released last week.

T-Mobile added 1.9 million customers in the fourth quarter and a total of 5.7 million in 2017. These figures include 1.1 million new postpaid subscribers in Q4, who pay monthly bills and are the most sought-after customers for wireless carriers. Moreover, T-Mobile continues to take share from rival carriers Verizon Communications (NYSE: VZ), AT&T (NYSE: T), and Sprint (NYSE: S), as it once again led the industry by a wide margin in terms of new postpaid phone subscribers. 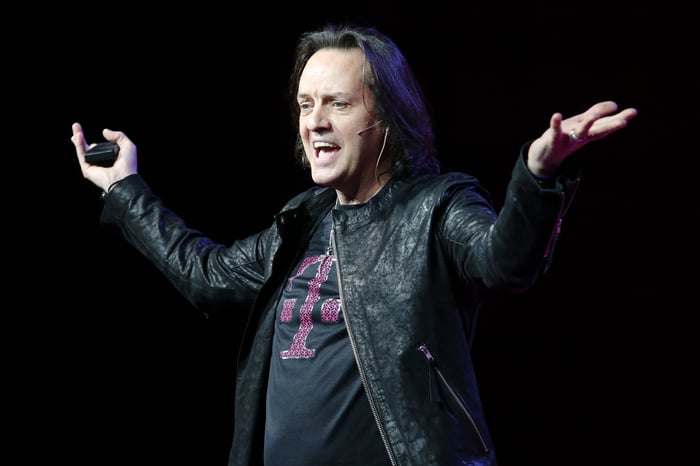 Better still, T-Mobile is getting better at retaining its existing customers. The company's fourth-quarter postpaid churn rate improved by 10 basis points year over year, to 1.18%.

Helping to drive these gains are T-Mobile's heavy investments in its network, which are boosting coverage and download speeds, as noted by Legere: "OpenSignal, the global standard for measuring consumers' real-world mobile network experience, named T-Mobile as the winner in 5, count them, 5 categories in their recent report," he said during the conference call. "Nearly 6 billion tests from actual customers of every major wireless network shows that T-Mobile's network is the fastest in the industry, and that T-Mobile customers get an LTE signal more often than AT&T, Sprint and even Verizon."

All told, T-Mobile's customer additions fueled a 5% rise in total revenue, to $10.8 billion. In turn, EBITDA -- adjusted to exclude stock-based compensation, spectrum gains, and certain other items -- rose 4% to $2.7 billion.

T-Mobile expects to add between 2 million and 3 million new branded postpaid customers in 2018. The company is also forecasting its full-year adjusted EBITDA to be in the range of $11.3 billion to $11.7 billion.

"We made incredible progress in 2017 building out our network and retail footprint to set ourselves up for future growth," Legere said in the company's press release. "Our business is clearly firing on all cylinders and our strong guidance for 2018 shows that we have no plans of letting up!"