Shares of Fiat Chrysler Automobiles (FCAU) surged 35.5% in January, according to data provided by S&P Global Market Intelligence. A big analyst upgrade drove much of the interest from investors.

FCA has essentially been in turnaround mode for the last several years. The merger of Italy's Fiat with America's Chrysler was a good move for both companies, but the resulting company needed a lot of work to thrive. That work was spelled out in an ambitious -- some would say audacious --  "five-year plan" presented by CEO Sergio Marchionne back in 2014. 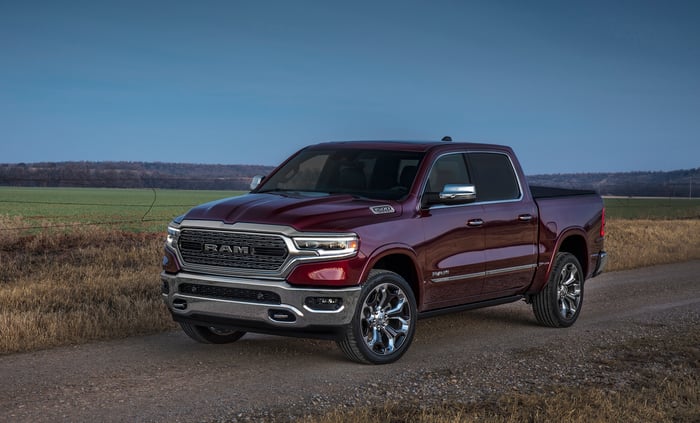 The all-new 2019 Ram 1500 is one of several new products that could boost FCA's margins in 2018. Image source: Fiat Chrysler Automobiles.

Simply put, evidence is mounting that Marchionne's plan is working, and that has investors excited. On January 5, JPMorgan Chase analyst Jose Asumendi upgraded FCA's shares from neutral to overweight, saying in a note that 2018 could be FCA's year to shine:

We believe FY18 will mark an exceptional year for FCA, renewing 40% of its North American production, improving margins across all regions, printing [about 4.5bn euros] of free cash generation hitting [2bn euros] net cash in FY18, and becoming debt free at last.

Asumendi said FCA was likely to benefit more than rivals from the new U.S. tax laws, and that the planned spinoff of FCA's component businesses late in the year could give shares an added boost. A strong fourth-quarter earnings report on Jan. 25 provided some early support for Asumendi's thesis.

FCA's shares fell back to earth -- somewhat -- after Bloomberg News reported on Feb. 2 that the U.S. Justice Department is seeking substantial civil fines from FCA. The Justice Department has sued FCA, accusing it of using illegal software to cheat on emissions testing in certain diesel-powered pickups and SUVs since 2014.

But FCA's shares are still up about 22% since the beginning of 2017, and the company appears to be broadly on track to much-improved results over the next year or two -- assuming that the economy stays strong, of course.