Please ensure Javascript is enabled for purposes of website accessibility
Log In Help Join The Motley Fool
Free Article Join Over 1 Million Premium Members And Get More In-Depth Stock Guidance and Research
By Anders Bylund - Updated Feb 15, 2018 at 9:26AM

The company updated its fiber-optic network plans, debunked a short-seller attack, and explained that 2018 should be a temporary plateau of fairly quiet growth.

Domain-registrar and network-services operator Tucows (TCX 2.77%) reported fourth-quarter results after the closing bell on Tuesday. Sales rose impressively due to a game-changing acquisition that closed a year ago, while the bottom line was inflated by a one-time tax benefit. Here's what this unusual quarter looked like in greater detail.

The acquisition of domain-registrar Enom closed roughly halfway into the first quarter of 2017, and that deal represents the bulk of Tucows' year-over-year growth, once again. Domain services accounted for 72% of the company's total revenues in the fourth quarter, up from 63% in the year-ago period.

Elsewhere, the Ting Mobile wireless service saw sales rising 34% year over year, to a total of $23.8 million. The Ting Internet fiber-optic network service was still too small to break out as a separate line item, but "other network services" grew sales by 48%, to $1.4 million.

The company reorded a one-time tax benefit of $5.8 million, or $0.55 per share, created by the Trump administration's tax reform in December. Going forward, Tucows' effective tax rate should drop from 36% in recent years to approximately 21%. 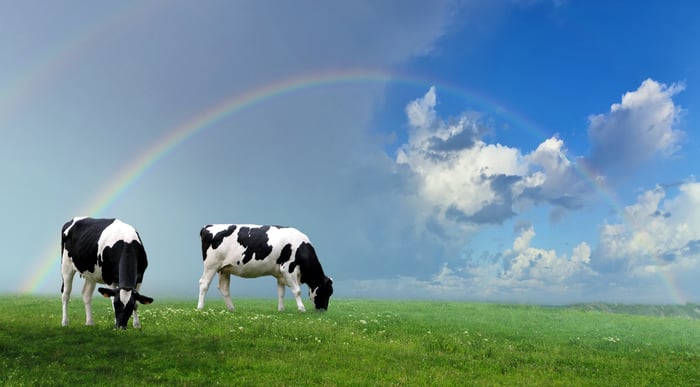 On the earnings call, Tucows CEO Elliot Noss acknowledged the recent attack on his company from a short-selling analyst. Noss shrugged off the attack and took the time to refute one of the main points from that report.

Short-seller firm Copperfield Research claimed that 11% of Tucows' domain-name registrations were going away, due to the settlement of a lawsuit that has been hidden from investors. According to Noss, a few million domain names are indeed moving out, but in a fully expected and disclosed manner -- no secret lawsuit settlements involved:

As expected, since the time of the transaction, Enom's largest customer Namecheap has migrated the bulk of their registrations off of the platform.

They have moved 2.65 million domains and there are another 450,000 or so that will move when agreement is reached. While there was a dispute still ongoing between us and Namecheap as to the method of them leaving, there was never any expectation that Namecheap would be part of the ongoing business that we bought.

We expected they would have left much earlier, and most importantly, all expectations we set around contributions of the Enom business assumed them to be leaving expeditiously. There were absolutely no surprises here.

In fiscal year 2018, Tucows expects to deliver adjusted earnings before interest, taxes, depreciation, and amortization (EBITDA) profits of roughly $54 million. That's up from $50 million in 2017. Meanwhile, capital expenses should rise from $11 million to $30 million as the Ting Internet build-outs continue to ramp up.

Management expects 2018 to be the end of Tucows' operating investments into Ting Internet's infrastructure. As suggested in the third-quarter call, Tucows sees 2018 as a year of building and preparation for a return to speedy bottom-line growth in 2019 and beyond.

The next quarter will be the first one using the new tax rules. At the same time, it'll be the last period with at least a partial year-over-year boost from the Enom buyout. That will be another unusual report, full of adjustments and one-time items, leading into a series of more easily comparable reports afterwards.

Editor's note: This article has been corrected to say that capital expenses are expected to rise in 2018.