Please ensure Javascript is enabled for purposes of website accessibility
Log In Help Join The Motley Fool
Free Article Join Over 1 Million Premium Members And Get More In-Depth Stock Guidance and Research
By Daniel Miller - Feb 15, 2018 at 10:33AM

GM may have been slower than crosstown rival Ford to recover from the Great Recession, but today, it's doing a lot of things right.

If you had a nickel for every time you'd heard that U.S. auto sales are peaking, you wouldn't need to invest, because you'd already be rich. But that's the climate automakers such as General Motors (GM -2.10%) and Ford Motor Co. have to deal with, and the truth is, investors are hesitant to put shares of them into their portfolios at a time when U.S. new vehicle sales did just decline year-over-year for the first time since the Great Recession. Despite the pessimism, though, GM is actually an attractive investment today.

Sure, with sales plateauing in the lucrative U.S. market, GM's days of easy gains on the top and bottom lines are over for now -- but that doesn't mean the automaker can't generate incremental profits. One way GM is well positioned to offset a slowing U.S. market is through General Motors Financial (GMF). GMF is the wholly owned captive finance subsidiary of GM, and provides auto financing solutions to consumers.

It makes a decent buck off the business, too. GMF generated $12.2 billion in revenue in 2017 — a record for the unit. Its EBT-adjusted earnings checked in at $1.2 billion, which was a massive 50% annual gain. 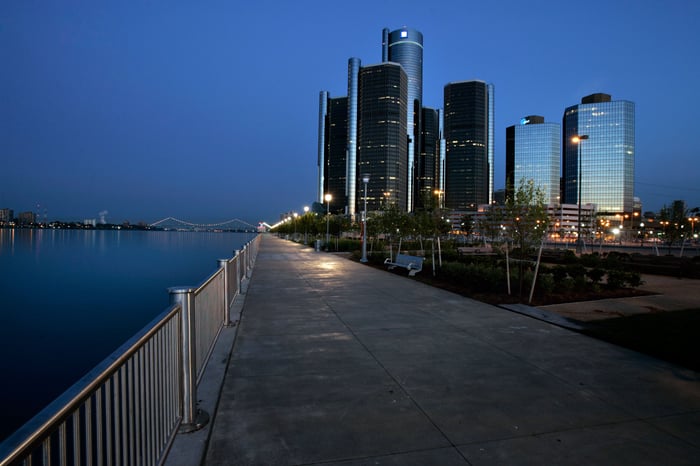 One of the biggest drivers of GM's strong Q4 results was a mix of vehicles that favors more expensive SUVs and trucks. That will be critical for GM in its ongoing efforts to offset sales volume declines in North America. 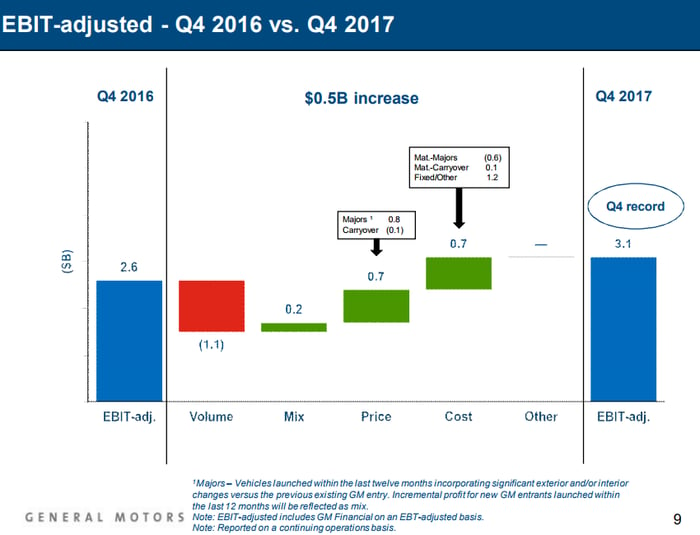 As you can see in the chart above, GM benefited from a $500 million drop in warranty costs, a $600 million decline in employee related costs, and $300 million of material performance. Between those favorable shifts and the pricing power of its recently launched CUVs, including the Chevrolet Traverse, Equinox and GMC Terrain, it was able to offset Q4's 135,000 unit sales decline. Best of all, GM's EBIT-adjusted margin from continuing operations jumped 170 basis points year over year to 8.2%, which is a solid mark.

To improve its cost structure, GM has already sold its Opel/Vauxhall operations, exited Venezuela, and restructured its entire international business segment, and management has made it clear that it will continue to take actions in that vein.

Currently, GM is trading at a cheap forward P/E ratio of 6.4, per Morningstar.com estimates, and offers a juicy 3.7% dividend yield. The good news is that GM plans to continue dishing value back to shareholders, and its cash flow could improve over the next couple of years as capital expenditures decline after the launch of important updates such as the new Chevrolet Silverado and GMC Sierra. In fact, GM has been returning cash to shareholders for some time now: From 2012 through 2017, GM laid out $25 billion in dividends and for share repurchases. That enabled it to gobble up roughly 25% of shares outstanding over that period.

To sum up, GM's a better buy than many realize because it's committed to cutting costs, exiting less profitable arenas, optimizing its sales mix to favor higher-margin vehicles, and returning value to shareholders at a hefty clip during the process.