The short answer: You'd have a six-figure sum.

Bitcoin's amazing rally in 2017 was impressive, but it pales in comparison to Ripple's performance. One of the best-performing cryptocurrencies of 2017, Ripple's price soared by a staggering 36,600% during the year. The digital currency has since given back some of its gains, but it's safe to say that early Ripple investors are still very happy.

Here's a brief overview of what Ripple is, where it could be going, and how much you would have today if you had the foresight (or luck) to invest $1,000 in Ripple at the beginning of 2017. 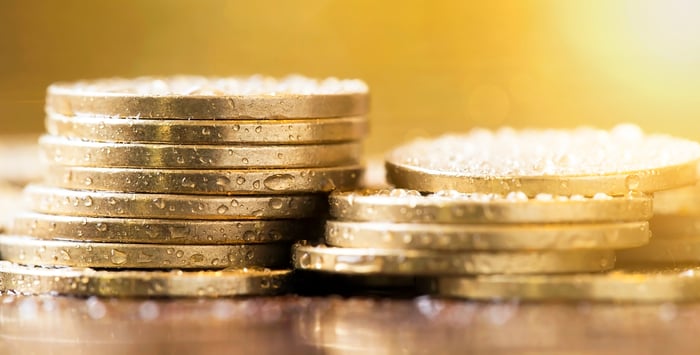 First off, to be clear, Ripple is the name of a company. The actual cryptocurrency tokens used in the company's financial solutions are officially known as the XRP. However, be aware that the two names are often used interchangeably.

Unlike many other cryptocurrencies and the companies that develop them, Ripple focuses exclusively on financial institutions, aiming to facilitate instantaneous and cost-effective international payments.

Ripple's network is extremely fast, especially in comparison to leading cryptocurrency bitcoin. Whereas bitcoin's network can handle about three transactions per second, Ripple's can handle 1,500. Furthermore, Ripple's transactions cost less than a penny. For comparison, bitcoin transaction fees are currently in the $2-$3 range, and that has actually come down lately.

Interestingly enough, Ripple's XRP tokens aren't being used much yet in its partnerships. However, the digital currency is in Ripple's plans for the future, and investors seem to be very interested.

The digital currency's price remained under a penny until March 2017, at which point it surged by more than 1,000% over a 30-day period, mostly on speculation. Aside from an optimistic tweet about the company's progress from CEO Brad Garlinghouse, there was no "headline news" behind the initial move, although the currency continued to rally, breaking through $0.40 for the first time on May 17, 2017.

Ripple's price then proceeded to retreat somewhat, mainly trading in the $0.18-$0.30 range until December, even though its key partnership with American Express and Santander was announced in November. As cryptocurrency interest exploded in mid-December, Ripple and its numerous partnerships clearly looked appealing to speculators, as the currency increased dramatically through the end of the year, closing 2017 at a price of $2.30.

While we're looking at "what if" scenarios, this investment would have peaked at a value of more than $610,000 in January.

Will Ripple continue its amazing performance?

While there's obviously no way to predict what will happen next in the volatile world of cryptocurrencies, investors are clearly optimistic about the digital currency's partnerships and its mission to transform the way the world moves money around. With arguably the most "real world" traction in the cryptocurrency space, Ripple will certainly be an interesting story to watch in 2018 and beyond.