Please ensure Javascript is enabled for purposes of website accessibility
Log In Help Join The Motley Fool
Free Article Join Over 1 Million Premium Members And Get More In-Depth Stock Guidance and Research
By Leo Sun - Feb 15, 2018 at 10:05AM

The “Amazon of China” tries to topple the “Google of China”.

Baidu (BIDU -0.38%) is often called the "Google of China" since it dominates the country's online search market. However, new data from StatCounter indicates that Baidu's lead might not be as secure as most investors think. Baidu's share of the entire search market reached a two-year high of 83% last October, but that figure dropped to 60% this month. 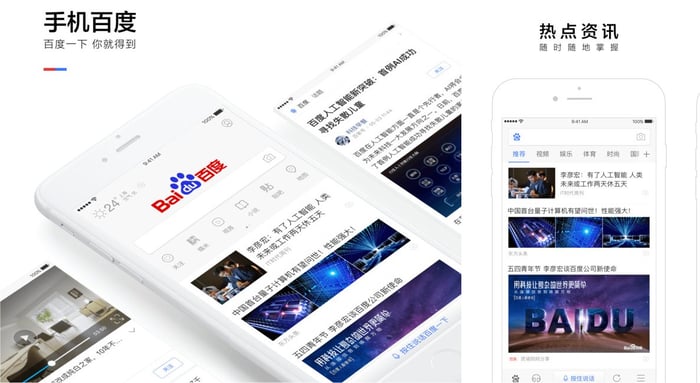 The big disruptor in the market was Alibaba's (BABA 0.51%) Shenma mobile search engine, which grew its market share from just 4% last October to 34% in February. Let's take a closer look at Shenma and how it could hurt Baidu's growth.

Where did Shenma come from?

Later that year, Alibaba acquired UCWeb, which is now included in its Digital Media and Entertainment unit, which generated 8% of its revenues during the first nine months of 2017. The unit's revenue rose 32% annually during that period thanks to the growth of mobile value-added services (like news feeds and mobile search) from UCWeb and rising subscription revenues at Youku Tudou, China's third largest video streaming service.

How badly could Alibaba hurt Baidu?

Alibaba's investments in Shenma indicate that it wants to loosen Baidu's grip on online searches and internet ads. Baidu's online marketing business generated 86% of its revenues during the third quarter, and mobile revenues accounted for 73% of its top line, up from just 64% in the prior-year quarter.

Therefore, Alibaba's direct assault on Baidu's mobile search business could put a nasty dent in its top line growth. Meanwhile, Baidu is trying to expand its ecosystem in multiple directions to counter both Alibaba and Tencent's (TCEHY -1.38%) WeChat, the most popular messaging app in China.

Last year, Baidu partnered with Alibaba's top rival, JD.com (JD 2.22%), to mine its shopper data and integrate its online marketplace into its mobile app. That move targets Alibaba's core e-commerce business, but it does little to address Shenma's explosive growth.

Meanwhile, Tencent has been adding online search features to WeChat, which it's expanded into an online-to-offline (O2O) platform for ride hailing, deliveries, purchases, mobile payments, and other services.

Why Baidu investors should be concerned

Baidu, Alibaba, and Tencent are locked in an ecosystem battle for control of China's massive internet market, similar to the current conflict between Alphabet's Google, Amazon, and Facebook in the US.

Just as Amazon is treading into Google's backyard with its fledgling online ad business, Alibaba is making a similar play against Baidu with Shenma. But unlike Google, Baidu lacks a leading mobile browser for the Chinese market.

The top four mobile browsers in China -- Chrome, UC Browser, Safari, and QQ Browser, in that order -- control over 90% of the market. Without a leading mobile browser, Baidu can't lock users into its search and advertising ecosystem. Alibaba clearly used the UC Browser and Shenma to exploit that weakness, and Baidu lacks an effective way to counter this attack.

Investors should remember that Baidu withstood market share declines before, most notably against Qihoo 360's Haosou in the desktop search market. However, Baidu eventually regained its footing, while Haosou's share peaked below 30%.

Therefore it's still too early to tell if Shenma's growth is strong enough to overwhelm Baidu in the mobile search market. Nonetheless, investors should keep an eye on Shenma's growth to see if it hurts Baidu's mobile business over the next few quarters.