The company outperformed analyst estimates on fourth-quarter profits, but the stock sold off. Here are some possible reasons.

The headline for Chipotle Mexican Grill's (CMG 1.48%) fourth-quarter earnings report seemed positive at first, with an earnings "beat" -- $1.34 in earnings per share (stripping out the effect of changes in the new tax law) versus analyst estimates of $1.32. Still, Chipotle's stock fell hard after the report, only rebounding from near 52-week lows after naming a new CEO.

But why did investors react so poorly to the quarterly results, especially when the stock was already priced at less than half its all-time highs from 2015? 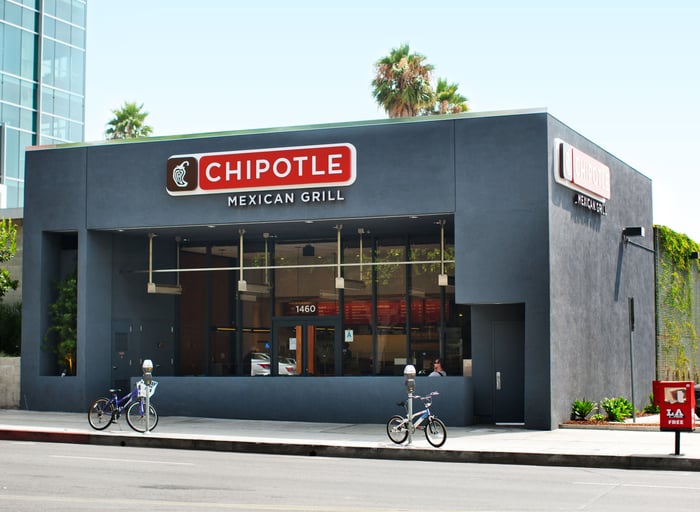 Chipotle was a growth stock

Even well off its highs, Chipotle has always been valued as a growth stock. Following a string E. coli outbreaks at its restaurants in 2015, the company was expected to eventually recover, though the uncertainty of when that would actually happen depressed the stock. However, that hope was stymied last summer with two headline-grabbing food safety incidents: one at a single location in Virginia, plus a viral video (pardon the pun) of rodents at a Texas restaurant that same week.

With another bout of bad press, a full recovery for Chipotle on a unit basis has remained elusive, which two years later, puts the overall recovery further in doubt.

In the latest quarter, the company reported same-store sales growth of only 0.9%. That number improves to 1.5% when you adjust for the one-time effect of the Chiptopia promotion in 2016, but it's still unimpressive when you consider the three-year "stack", which shows where average unit volumes (AUVs) are now, relative to three years ago:

What's worse, the 1.5% increase in same-store sales last quarter was entirely due to a 2.4% price increase. So that means traffic actually declined year over year -- not a good sign when you are supposed to be rebuilding your business.

How low will Chipotle go?

Chipotle is very tough to value, because there is so much leverage -- for better or worse -- in the operating model. Unlike franchise-based fast food chains, Chipotle owns all its stores, which means it bears the costs of labor, real estate, and food. That means if restaurant AUVs stay around where they are (roughly 82.5% of prior highs), the company's mid-single-digit operating margins could be here to stay.

However, if Chipotle can find some way back to the AUVs of 2015, operating margins have the chance to return to the mid to high teen levels posted that year. Those margins led to $15.10 per share of earnings in 2015, which would give the stock a valuation of only 17.5 times earnings today, well below many competing restaurant chains. In addition, those 2015 earnings were achieved when the company had 300 (roughly 12%) fewer restaurants.

But if this is the "new normal", Chipotle still doesn't look cheap, at roughly 52 times trailing earnings, and right now, things seem to be looking that way. Whether that's due to boredom, increased competition, or fallout from the food safety incidents last summer is hard to tell. Likely, it's a little bit of all three.

How Chipotle plans to improve

Management seems to be acknowledging this new, more challenging world. Founder Steve Ells is stepping down as CEO to be replaced by Brian Niccol, CEO of Yum! Brands' Taco Bell. The company is also scaling back its new restaurant openings to only 130 to 150 locations in 2018, down from a previous high of 240 in 2016. That's on top of investing in improvements to the current store base, optimizing certain stores for mobile orders, and the introduction of a loyalty program later this year. It's possible a loyalty program could help drive volume, as similar initiatives have been very effective for competitors across the industry.

I'm glad I sold my Chipotle shares over the summer but remain a fan of the burritos. As an investor, though, I'm happy to wait and see how the new initiatives and leadership change play out before getting back in -- it's still too early.