Earnings were good, but further growth depends largely on a one-time boost from tax reform.

Wall Street had another good day Thursday, continuing to claw itself out of the hole investors dug for it last week with a 1.1% gain on the S&P 500. At first, Waste Management (WM -0.43%) seemed to be helping to drive those gains even higher -- but by day's end, Waste Management ended up barely keeping pace with the rest of the market, closing up 1.7%.

What happened? In a word, "earnings." Waste Management released its fourth-quarter and full-year 2017 numbers Thursday morning. Sales were up 6.4% at $14.5 billion for the year, and earnings grew 10% to $3.22 per share. 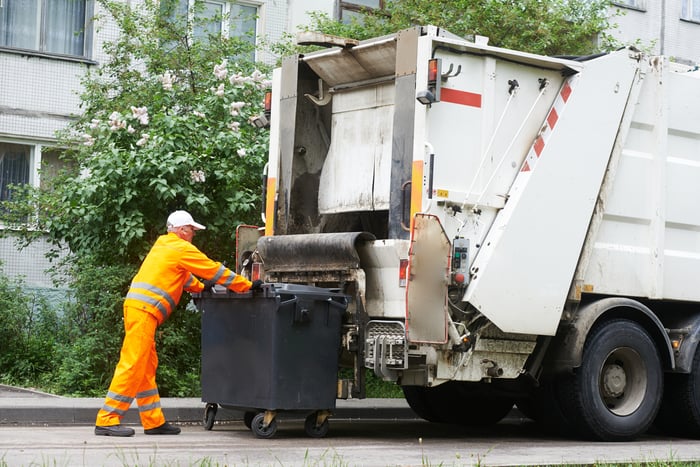 Waste Management's earnings weren't garbage, but investors got leery of overpaying for them late in the day. Image source: Getty Images.

Free cash flow (cash from operations, minus capital expenditures) was a respectable $1.67 billion, or $1.77 billion as management calculated it -- short of the $1.95 billion in reported net income, but at least no worse than the $1.67 billion in cash profits generated in 2016.

From Wall Street's perspective, this counted as a win. Q4 earnings, adjusted for one-time items, came to $0.85 per share (analysts had expected $0.83). Sales of $3.65 billion in the quarter topped predictions for $3.56 billion.

Waste Management told investors it expects to raise its prices by about 4% for 2018 and grow its revenues about 2%. Costs will rise, too, but counting a $0.62-per-share "benefit from tax reform," management expects to earn "between $3.97 and $4.05" this year, growing its profits 24.5% year over year.

That promised growth spurt (plus the fact that Waste Management "beat earnings") probably explains investors' initial positive reaction to the earnings news. And the fact that most of Waste Management stock's gains vanished later in the day? I'd attribute the drop to the reality that, at $84 a share, the stock is now trading for a pricey 21 times earnings -- but those earnings won't grow at 24.5% for much longer than this first year of tax reform-fueled growth.