Between the five new rides and several more attractions on the way, Disney's Hollywood Studios is going to be a much more successful park by 2019.

The reinforcements are coming to Disney's (DIS -1.20%) least visited Florida theme park. Toy Story Land, Star Wars: Galaxy's Edge, and Mickey and Minnie's Runaway Railway will reshape the guest experience at Disney's Hollywood Studios, and we now know that they will all be completed by the end of 2019.

We learned over the weekend that Toy Story Land will open on June 30 this year, and with Mickey and Minnie's Railway recently confirmed as a 2019 opening along with the ballyhooed 14-acre Star Wars-themed expansion, that's a total of five new rides and several more attractions that will draw guests to the park. Disney's Hollywood Studios has several shows and meet-and-greet experiences in place, but with just four operating rides at the moment, we're talking about more than doubling the number of available rides by the end of next year. 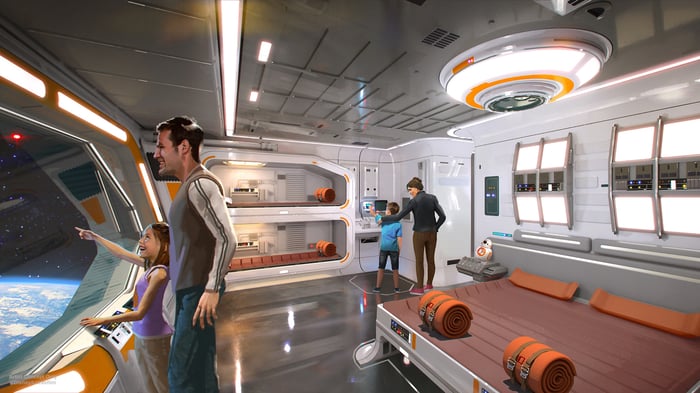 Disney's Hollywood Studios has been dead last in attendance among Disney World's four theme parks since 2010. Disney doesn't put out official theme park attendance figures, but industry tracker Themed Entertainment Association pegs the guest count for Disney's Hollywood Studios at 10.776 million in 2016, down 0.5% from the year before. Magic Kingdom -- the busiest theme park not only in Disney World but in the world -- attracted 20.4 million visitors that year.

Disney's Hollywood Studios has become what Disney's Animal Kingdom used to be, a half-day park. Bouncing from show to show with just four rides to check out between performances can be a drag as a full-day commitment. Some of this has been by design, as Disney has gutted a couple of rides and several attractions in recent years. The new experiences are going up where the old attractions used to be. It's going to be worth it when the transformation is complete.

The makeover will be a game changer, and Disney knows it. The theme park giant is expanding its parking lot to make room for the inevitable spike in guests. It won't happen this year. Toy Story Land is going to be a welcome addition, introducing two new rides to a park that sorely needs them. However, the real draws will come next year when Disney World opens Star Wars: Galaxy's Edge and Disney World's first Mickey Mouse-based ride. Look out into the future and we'll have the Star Wars hotel, which Disney revealed earlier this month will connect seamlessly with Star Wars: Galaxy's Edge. There is no date for when the immersive hotel will open, but 2021 to line up with Disney World turning 50 is probably a good bet.

Disney's Hollywood Studios is hungry. It's been barren for too long. Disney has closed popular attractions before, but it's never taken this long to replace them. A visit to the park will be entirely different by the time the new rides and experiences are complete in 2019. Disney's Hollywood Studios should easily retake the silver to become the second most visited park in 2020, and it may just be a matter of time before it challenges the Magic Kingdom for supremacy.

Disney and its investors won't mind. Theme parks are becoming a larger contributor to Disney's revenue and operating profit at a time when its other segments are languishing. Turning its least visited park around will only help make Disney's theme parks business that much more important. Mickey Mouse and Luke Skywalker are coming, and there will be a lot of people behind them following them into Central Florida.