Please ensure Javascript is enabled for purposes of website accessibility
Log In Help Join The Motley Fool
Free Article Join Over 1 Million Premium Members And Get More In-Depth Stock Guidance and Research
By Beth McKenna - Feb 20, 2018 at 8:32AM

Here's how the GPU specialist is profiting or expecting to profit from the massive trend of AI. Many investors should be pleasantly surprised.

There was a wealth of information covered on the Q4 analyst conference call. Our focus here is on how artificial intelligence -- or more specifically, a burgeoning form of AI called deep learning -- is powering the company's growth and how it's expected to do so in the future. (Deep learning aims to mimic in machines how humans think or make inferences from data.) 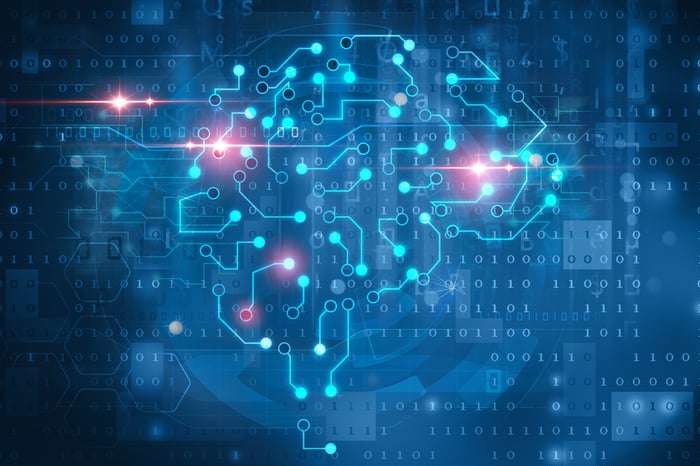 For reference, here's how NVIDIA's market platforms performed in the quarter:

1. AI training is a huge growth driver for the data center platform

[Data center's] excellent performance reflected strong adoption of Tesla V100 GPUs based on our Volta architecture, which began shipping in Q2 and continued to ramp in Q3 and Q4. V100s are available through every major computer maker and have been chosen by every major cloud provider to deliver AI and high-performance computing.

NVIDIA's GPUs have emerged as the gold standard for deep learning training. (Training, the first of the two-step deep learning process, involves teaching an artificial "neural network" how to make inferences from data like humans do.) Customers adopting the company's Volta-based Tesla V100 GPUs include Amazon Web Services (AWS), Alphabet's Google, IBM, Microsoft Azure, and Oracle in the United States, and Alibaba, Baidu, and Tencent in China.

While AI training is a huge growth driver for the data center platform, it's not the only one, as I've seen erroneously reported. High-performance computing (HPC) and virtualized computing are also helping to power growth. (On the Q4 earnings call, Kress said the company has recently begun seeing a convergence of AI and HPC; however, these are still largely two different growth drivers.)

We also saw a growing traction in the AI inference market where NVIDIA's platform can improve performance and efficiency by orders of magnitude over CPUs [central processing units]. We continue to view AI inference as a significant new opportunity for our data-center GPUs. Hyperscale inference applications that run on GPUs include speech recognition, image and video analytics, recommender systems, translations, search and natural language processing.

Inferencing, the second step in deep learning, involves machines applying their training to new data. While NVIDIA's GPUs are the platform of choice for deep learning training, it's only been very recently that they've begun to make inroads into inferencing. As recently as the Q2 earnings call, CEO Jensen Huang said that the company did "0% of our business in inferencing." CPUs dominate data center inferencing.

Huang said on the Q4 call that NVIDIA began shipping its Tesla P4, which is its data center inference processor, in the quarter. Huang believes the business opportunity is great: "My sense is that the inference market is probably about as large in the data centers as training, and the wonderful thing is everything that you train on our processor will inference wonderfully on our processors as well."

3. AI is an emerging growth driver for the professional visualization platform

I think it will pleasantly surprise many investors that AI is a burgeoning growth driver for the professional visualization platform. (Quadro is NVIDIA's workstation processor, which is targeted at design professionals.) Huang gave examples on the call as to AI applications: "[Y]ou could fill in damaged parts of a photograph, or [on] parts of the image that hasn't been rendered yet, you [can] use AI to fill in the dots. ... It's called generative design."

4. Opportunities in "inferencing at the edge" include self-driving vehicles, smart cities, drones, and other robots

In addition to the data center AI inference market, NVIDIA also has products targeting "inferencing at the edge," or "AI at the edge." From Huang's remarks:

[T]he first embedded platform we're targeting is self-driving cars. ... And then ... we have a platform called Metropolis, [which] is used for very large-scale smart cities where cameras are deployed all over to keep cities safe. ... And then we've announced recent success with FANUC, the largest manufacturing robotics company in the world, [and] Komatsu, one of the largest construction equipment companies in the world, [in applying] AI at the Edge for autonomous machines. ... [Our platforms power] several industrial drones that are inspecting pipelines and ... flying over large spans of farms to figure out where to spay insecticides more accurately.

Inferencing at the edge is at the cusp of taking off, and NVIDIA has laid the groundwork to be a big winner in such applications as driverless vehicles, smart cities, drones, and factory robots.