Please ensure Javascript is enabled for purposes of website accessibility
Log In Help Join The Motley Fool
Free Article Join Over 1 Million Premium Members And Get More In-Depth Stock Guidance and Research
By Lee Samaha - Feb 20, 2018 at 9:04AM

The machine vision company had a strong year and prospects look good for 2018.

Cognex Corporation (CGNX -1.85%) reported a strong set of fourth-quarter earnings and its guidance and commentary suggested 2018 could be another great year for the company. Let's take a closer look at the results and management's discussion of its growth opportunities in 2018.

In short, it was another good quarter in what proved to be a standout year for Cognex. On a full-year basis, revenue rose 44% to $748 million with operating income up 61% to $259 million.

Turning to the formal guidance for the first quarter of 2018, it's clear that management expects the growth trend to continue.

The revenue guidance looks good, and even there's even good news in the (superficially disappointing) margin and expense guidance. If you are wondering why gross margin looks set to dip, it's because of a change in how Cognex recognizes revenue.

Going forward, Cognex will report sales on a gross basis rather than a net basis, so gross margin will "will decrease by 100 to 200 basis points," according to CFO John Curran (this and other quotes courtesy of S&P Market Intelligence). Meanwhile, expenses will increase as a consequence of supporting future growth. 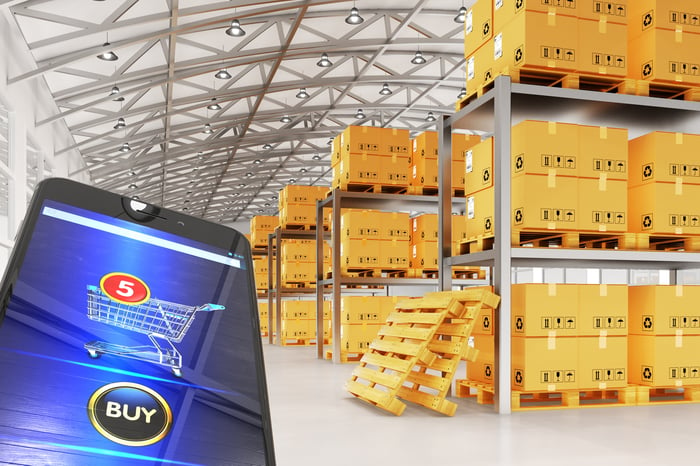 What happened in Cognex's quarter and full year?

The fourth and first quarters are traditionally the weakest quarters for Cognex -- companies tend to ramp up capital spending on the company's solutions in the second and third quarters as they prepare for their fourth quarter -- so let's focus on developments over the full year.

Cognex saw broad-based strength across its key growth markets and benefited from an improving environment for capital spending on its machine vision solutions. Indeed, CEO Rob Willett described market conditions as being "the best we have ever experienced." Consumer electronics (particularly smartphones) is the highlight, and its growth came in far higher than management expected at the start of the year. Of course, it's very difficult to predict what individual companies will do with their specific capital spending. Willett indicated that end-market demand wasn't just about the number of smartphones produced, but also the technology features applied and innovation and investment made.

Similarly, the automotive market has long been a key end market for Cognex --automotive companies have traditionally been early adopters of robotics and automation solutions -- and slowing global auto production growth could be seen as a problem for the company. However, Willett outlined that automotive-related sales grew 25% in the last year whereas expectations are for 10% growth in the long term. Moreover, "[A]doption of electronic and hybrid engines and then the increasing use of electronic components and systems give us confidence that we're going to go on seeing good rates of growth in automotive over the next year or two," according to Willett on the earnings call.

Cognex is an interesting stock to capitalize on growth in robotics and e-commerce, and Willett disclosed that Cognex was the supplier of choice to four out of the five leading robotics companies. Meanwhile, two other growth areas -- logistics (largely e-commerce related) and 3D products -- combined represent 15% of Cognex's sales and are both expected to grow "at roughly 50% a year for the foreseeable future."

Investors will be looking for Cognex to continue its strong run by signing lots of new deals in consumer electronics and logistics in 2018. Interestingly, the company seems to be able to generate growth from secular trends in automation spending, even from long-established adopters of machine vision solutions, such as the automotive industry. In other words, Cognex looks headed for secular and cyclical growth in 2018.