Jamba stock had its biggest gain in nearly eight years after the company posted strong comps and encouraging guidance for 2018.

One of last week's biggest winners was Jamba (JMBA), soaring 29.1% higher after the company released an encouraging financial update. The parent company of the Jamba Juice smoothie chain doesn't know when it will publish its actual year-end numbers, but the select metrics it did announce last week came as a welcome relief to investors.

Jamba revealed that comps for the fourth quarter on a comparable calendar basis rose a hearty 5.3%, as a 5.2% uptick at franchisee-owned stores was lifted slightly higher by a 6.5% spike at its company-owned locations. Comparable-store sales were negative through the first nine months of the year, as a slight increase in the second quarter was more than offset by declines in the first and third quarters. The 29% surge is the stock's biggest one-week rise since the spring of 2010. 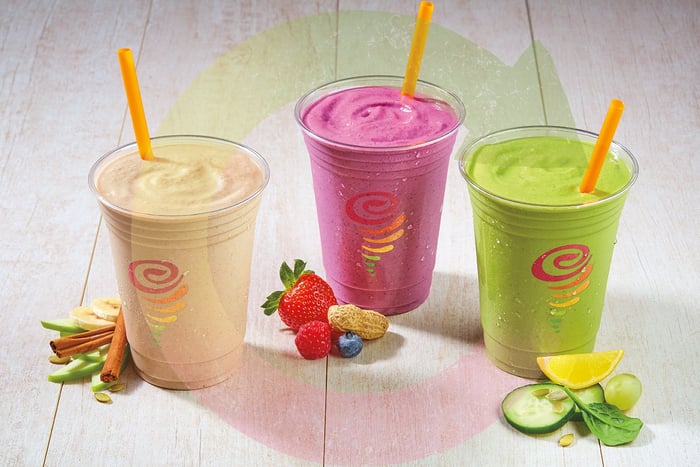 Jamba still has a long way to go before it's truly embraced by investors. We're still waiting on the past year of financial information. Jamba has run into some revenue recognition issues as it hands over more and more of its company-owned stores to successful franchisees. The shift away from company-owned locations has resulted in what should now be four years of declining revenue, but the hope here is that profitability will benefit as the company moves to become a higher-margin enterprise collecting franchisee payments.

The concept is growing, but there still remains a lot of churn. Fifteen Jamba smoothie shops opened during the fourth quarter, partly offset by eight closures. There are now more than 800 Jamba Juice stores. It had 11 net openings for all of 2017, with 50 new stores held back by 39 closures. It fell woefully short of its initial goal calling for 65 net new openings in 2017. This isn't necessarily a bad thing, as the average annual unit sales of the 39 closed stores -- $300,000 -- is less than half of the concept's average unit volume.

Jamba isn't standing still. It promoted gift cards over the holidays, and it saw sales on that front shoot 79% higher through in-store and third-party retailers. Jamba's also excited about how new units with drive-thru windows are faring. It's aiming to have 25% of this year's new stores offering drive-thru convenience, up from 10% in 2017.

The country's largest smoothie chain is no market darling. The stock has fallen for three consecutive years, and it was trending lower in 2018 before last week's pop pushed it into positive year-to-date territory. If it wants to keep the stock price gains coming, it's going to need to keep the positive comps coming and file audited financials. Its guidance for 2018 calls for $68 million to $70 million in revenue, with positive comps and adjusted earnings before interest, taxes, debt, and amortization. The chain's comps have clocked in better than the industry benchmark since Carrabba's Italian Grill president David Pace took over as CEO in early 2016, but that hasn't been enough to please the market. Jamba may have the right ingredients in place for a turnaround, but now it needs to maintain growth to help it achieve that turnaround.

Jamba Stock Has a Lot to Prove on Monday

5 Chains Joining Starbucks in the Pumpkin Spice Craze
Can a New CEO Juice Up Jamba?

Jamba Juice Has a Blender Bender

This Initiative Could Turn Jamba Juice Into a Superstar