The home goods market is yet another space where the online retailer is ready to crush the competition.

Could the Instant Pot be a harbinger of Bed Bath & Beyond's (BBBY -5.23%) doom? The insanely popular pressure cooker is driving Amazon.com's (AMZN 3.15%) growth in the housewares segment, and the online retailer's ability to map consumer buying habits gives it a competitive edge that could make it unrivaled in the space.

A report by One Click Retail reveals that housewares is second only to consumer electronics in importance for Amazon, which means that its prowess at extracting and analyzing data about its 300 million active customers "with unmatched accuracy" should be of significant concern to any retailer counting on that niche to revive its own fortunes. 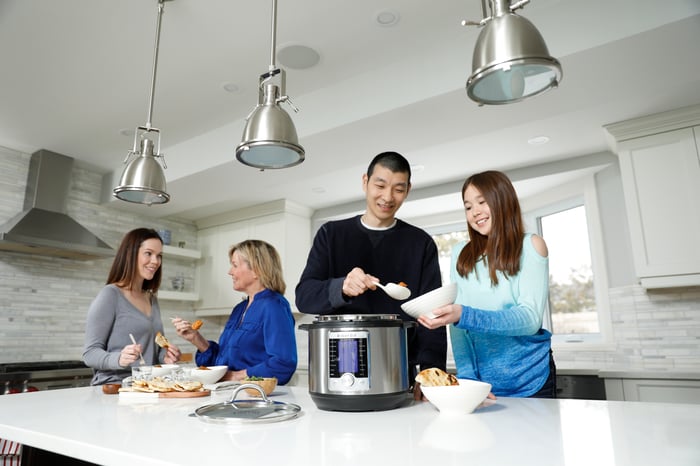 The analysis by the e-commerce data measurement company found U.S. sales of housewares surged 20% last year to an estimated $8 billion, driven by such kitchen appliances like the Instant Pot, which nearly doubled its sales in 2017, and almost single-handedly drove the majority of Amazon's sales growth in the category.

That's key because the online retailer's core demographic is the millennial -- an age group that ranges from early 20s to mid-30s, and that is finally entering homeownership in serious numbers. One Click Retail says the Instant Pot's phenomenal success offers some useful insights about these customers, who, because they're investing heavily in their homes -- but who also work long hours and desire products that save them time and effort -- find the Instant Pot a magical convergence of "convenience and in economy of space."

Depending upon who's counting, it's estimated that half to two-thirds of all U.S. households have an Amazon Prime account, the $99-a-year membership loyalty program that gets you free 2-day shipping, along with a bunch of other amenities like free streaming movies and music.

Using artificial intelligence and analytics, Amazon can drill down into consumer purchase history and preferences, and target its offerings accordingly. Combine that with an infrastructure network that puts half the U.S. population within 20 miles of a fulfillment center, and it's clear why brick-and-mortar niche players should be worried.

Making a new home for itself

Amazon recently launched Amazon Home, a dedicated e-commerce zone that allows consumers to shop by category or room, with a particular emphasis on delivering large furniture and appliances. It has already assembled an air fleet for delivery, is planning to build a new distribution center in Kentucky, and just announced its own trucking service to compete with UPS and FedEx for last-mile delivery.

From small household appliances and vacuums to air conditioners and bedding, Amazon.com is able to anticipate everything the consumer will need. The Instant Pot was its top seller not only on Prime Day, but was also one of the most popular purchases of the Christmas season; according to Amazon, its customers bought "enough Instant Pot pressure cookers this holiday to make more than nine million bowls of chili at once."

That has to be worrisome to Bed Bath & Beyond, which is suffering from persistently declining sales. Amazon sold about the same amount of housewares across all of 2017 as the home goods retailer sold in the first three quarters of the year; if trends continue, the online retailer will soon surpass Bed Bath & Beyond.

But it's not only Bed Bath & Beyond that is counting on the home department to survive. J.C. Penney, for example, says it is attempting to increase the amount of revenue per customer it generates primarily through housewares (and also toys). It has added appliance showrooms to some 600 stores, and mattresses departments to 500. And Sears Holdings is opening stand-alone appliance and mattress stores.

One Click Retail says Amazon's new focus on housewares "is no passing interest – it's a strategic move designed to anticipate (and meet) the evolving needs of their core audience."

Those were needs once served by specialty outlets like Bed Bath & Beyond and department store chains such as J.C. Penney and Sears. Amazon.com is using its unique capabilities to lure away customers from those competitors, and may soon crush them in the process.