Please ensure Javascript is enabled for purposes of website accessibility
Log In Help Join The Motley Fool
Free Article Join Over 1 Million Premium Members And Get More In-Depth Stock Guidance and Research
By Keith Speights - Updated Feb 22, 2018 at 8:56AM

Hint: Harvoni and Truvada no longer make the list.

Gilead Sciences (GILD -0.03%) claims a long history of blockbuster products that fueled the big biotech's success. HIV drugs Atripla and Truvada and hepatitis C drugs Sovaldi and Harvoni, among others, helped Gilead become the company that it is today.

But those are the drugs of Gilead's past. When the company's Chief Scientific Officer Norbert Bischofberger and CFO Robin Washington sat down to answer questions at the RBC Capital Markets Healthcare Conference in New York City on Wednesday, the discussion centered on newer products and pipeline candidates. Here's what Gilead's executives said about five drugs that are especially critical for the biotech's future. 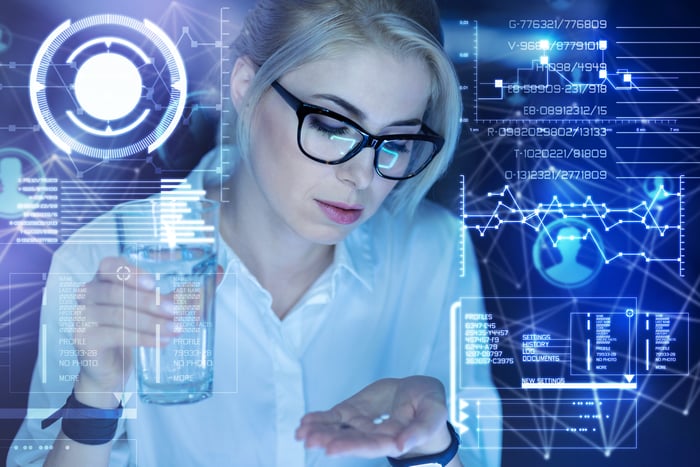 Gilead won Food and Drug Administration (FDA) approval for HIV drug Biktarvy on Feb. 7, 2018. Norbert Bischofberger stated that, with the new drug, the company has "reached a point where there's almost no compromise." He pointed out several advantages for Biktarvy, including its minimal drug-drug interactions, no need for upfront testing, no black-box warning for liver toxicity as with some rival drugs, and its high tolerability.

Prior to Biktarvy's approval, some at Gilead had referred to the drug as the company's "Mount Everest." The drug is certainly expected to generate a mountain of cash. Market research firm EvaluatePharma ranked Biktarvy as the biggest new product launch of 2018. Analysts estimate that the HIV drug could reach peak annual sales of close to $6 billion.

Biktarvy is so good that Bischofberger said it would be the last HIV single-tablet regimen that Gilead develops for treatment-naive and stable patients. He said that, "we don't see how we can improve upon this," referring to Biktarvy. However, Bischofberger added that Gilead is working on the development of a long-acting injectable that patients could take instead of a daily pill. Gilead is also researching a potential cure for HIV.

Thanks to its acquisition of Kite Pharma last year, Gilead claims the second FDA-approved chimeric antigen receptor T cell (CAR-T) drug on the market with Yescarta. But although Yescarta won approval in October 2017 as a third-line treatment for large B-cell lymphoma, it will take a while for sales to pick up momentum. Robin Washington noted that Gilead is proceeding with "a very measured launch" of the cancer drug.

Washington stated that Yescarta's launch is going as Gilead expected. The biotech now has 28 centers trained and certified for administering the CAR-T therapy to patients. Gilead's goal is to get centers representing 80% of covered lives up and running.

Bischofberger added that more things are on the way with Gilead's cell-therapy program. He said that the company is looking at using Yescarta in earlier lines of therapy and in other malignancies, including acute lymphoblastic leukemia, mantle cell lymphoma, and chronic lymphocytic leukemia. RBC Capital Markets analyst Brian Abrahams projects peak sales for the drug of $2.7 billion.

Gilead's next big opportunity in treating liver disease could be in non-alcoholic steatohepatitis (NASH). With NASH expected to be the leading cause of liver transplants by 2020, the annual market size for drugs to treat the disease is projected to eventually be between $20 billion and $35 billion.

Bischofberger said that Gilead's NASH programs "are going extremely well." The biotech's lead NASH candidate is selonsertib, which is being evaluated in late-stage studies for treating NASH stage F3 liver fibrosis and stage F4 cirrhosis. He stated that data from these studies should be available early in 2019, with subsequent filing for regulatory approval to follow a few months later if all goes well.

Another promising pipeline candidate high on Gilead's list is filgotinib. Gilead licensed the JAK1-selective inhibitor from Galapagos in 2015. The deal also involved Gilead buying a 13% stake in the small biotech.

Filgotinib could have several advantages that set it apart from other JAK inhibitors, according to Bischofberger, including increasing rather than decreasing hemoglobin, not increasing platelets, and potentially having less risk of infection. Gilead could file for FDA approval of the drug in treating rheumatoid arthritis next year if studies are successful. Some analysts think that filgotinib could achieve peak annual sales close to $3 billion.

Neither of Gilead's executives mentioned Epclusa by name. However, they did talk about hepatitis C, and Epclusa is the company's current top-selling hepatitis C virus (HCV) drug. In November, Gilead CEO John Milligan said that 2018 could be a year when HCV revenue stabilized. Robin Washington seconded that view at the RBC conference, stating that Gilead is "very comfortable that 2018 will be a stabilizing year" for its HCV franchise.

She said that it now comes down to a head-to-head battle for market share between Gilead and AbbVie. There are three key dynamics in the HCV market -- market share, pricing, and patient starts. Washington thinks that Gilead's market share and drug prices will stabilize in 2018. That leaves patient starts, which Gilead expects to continue to decline gradually.

Why is Epclusa critical for Gilead's success when declining HCV revenue is the cause of the biotech's problems right now? Epclusa and other HCV drugs continue to generate huge cash flow for Gilead. The company plans to use that cash flow to reinvest into its pipeline, including potential future acquisitions and collaborations. Gilead's future blockbusters will be funded by its current winners.