Please ensure Javascript is enabled for purposes of website accessibility
Log In Help Join The Motley Fool
Free Article Join Over 1 Million Premium Members And Get More In-Depth Stock Guidance and Research
By Ashraf Eassa - Feb 23, 2018 at 9:00AM

It's about time for Apple's cheapest iPad to get an upgrade.

In March of 2017, Apple (AAPL 1.30%) introduced a new member of the iPad family, known simply as iPad. The device wasn't noteworthy for its features, internal specifications, or looks -- it was interesting because it was relatively cheap, starting at just $329.

The new low price point of the device helped to accelerate Apple's iPad unit shipments and, ultimately, financial performance, as it allowed Apple to gain share in a declining tablet computer market. 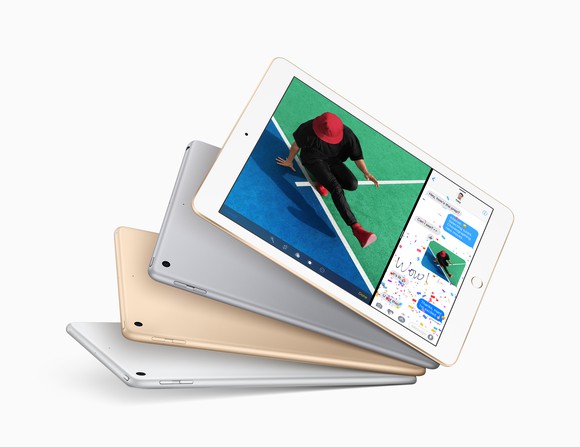 Apple, like most computer vendors, releases upgraded versions of its existing products every year. Improved products help to spur consumer demand by offering improved features, performance, and/or aesthetics for roughly the same prices as the prior-generation products.

Since it's been nearly a year since Apple introduced the first low-cost iPad, it shouldn't come as a surprise that an upgraded version seems to be imminent, according to 9to5Mac.

An upgraded version of the current iPad is likely to be priced roughly in line with the current model, which means $329 for the base model without cellular connectivity.

This means Apple will need to be judicious in its component choices for the new device; Apple needs to deliver feature improvements, but it needs to keep its cost structure in check.

To that end, I think Apple will upgrade the applications processor from the A9 to the A10 Fusion. This should enable a significant boost in general-purpose performance, graphics capability, and camera quality.

It's not clear if Apple will upgrade the display, though if it does, I'd expect the main upgrade to be to a display that supports the wider DCI-P3 color space (this would mean improved color saturation with supported content).

Such upgrades wouldn't be particularly expensive to implement (all of the components mentioned above are relatively mature and should be inexpensive to produce), but they'd improve the value proposition of the low-cost iPad significantly generation over generation.

What happens to the current iPad?

A little while back, DigiTimes claimed that Apple was planning to introduce an iPad that starts at just $259 in the second quarter of 2018. Although it's possible that Apple intends to price the upgraded iPad even more aggressively than it did its predecessor, there's another possibility: The current iPad, but sold at a discount.

Indeed, Apple could keep the current iPad available, but simply lower the price to $259 while also offering the updated iPad. Interestingly, over the last few iPad generations, Apple hasn't kept the older models around. The first-generation iPad Pro models, for example, aren't available from Apple any longer.

Alternatively, Apple may be planning to introduce the updated iPad in a broader range of storage configurations, up from the current two (32GB and 128GB). The refreshed iPad could come in 32GB, 64GB, and 128GB versions, and the 32GB model could start at $259, with the 64GB model taking the place of the current entry-level model at $329.

It won't be long before we know what Apple's plans are, either way.