Please ensure Javascript is enabled for purposes of website accessibility
Log In Help Join The Motley Fool
Free Article Join Over 1 Million Premium Members And Get More In-Depth Stock Guidance and Research
By Keith Speights - Feb 23, 2018 at 6:02AM

GW Pharmaceuticals' CBDV drug strikes out in a phase 2a study. But there's a much more important catalyst ahead.

Seven words shaved more than $200 million off GW Pharmaceuticals' (GWPH) market cap in early trading on Thursday. The marijuana-focused biotech announced the preliminary results of a phase 2a clinical study of GWP42006, a compound that features cannabidivarin (CBDV) as the primary cannabinoid molecule in treating focal seizures. At the top of the press release were seven words: "Study did not meet its primary endpoint."

GW Pharmaceuticals stock plunged more than 5% on the news of the CBDV clinical setback. But does the pullback present a buying opportunity for investors? 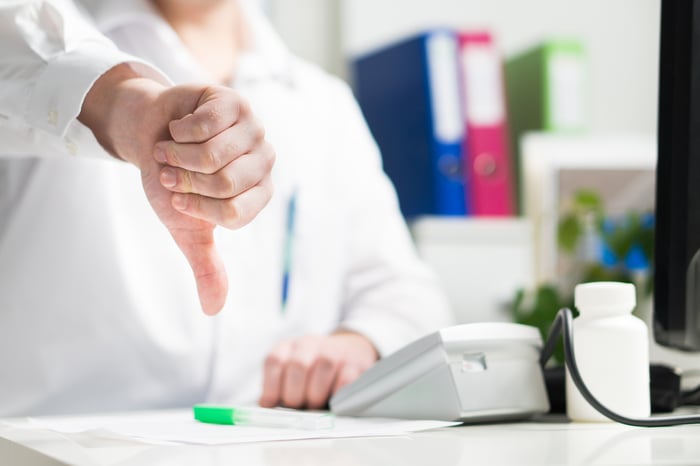 Patients taking GWP42006 in the phase 2a clinical study showed reduction in focal seizures of around 40%. That's good, right? Yes, but the problem was that roughly the same reduction was achieved in the group of patients on placebo.

GW Pharmaceuticals Chief Medical Officer Volker Knappertz hinted at this result when he spoke during the company's fiscal 2018 first-quarter earnings conference call a few weeks ago. Knappertz warned that statistical significance for some of the biotech's CBDV studies won't be as critical. He specifically pointed out the relatively small size of the studies. More importantly, he noted that the placebo response rate for patients in clinical studies has increased in recent years.

Knappertz's comments were echoed in GW's announcement of the phase 2a clinical-study failure. The biotech stated that, "the extent of this placebo response is substantially greater than that seen in published studies of other treatments in similar patient populations." And GW was right. The reality is that a rise in placebo response rates is causing problems across the biopharmaceutical industry, especially in clinical trials of drugs targeting treatment of pain and psychiatric diseases.

GW Pharmaceuticals said that it's trying to figure out why the placebo response was higher than expected in the phase 2a study. That's easier said than done.

The company isn't throwing in the towel on GWP42006, however. GW is continuing to evaluate the cannabinoid compound in treating autism spectrum disorders and exploring additional opportunities in treating epilepsy. That makes sense considering the anti-epileptic properties that CBDV has demonstrated in earlier pre-clinical and clinical studies.

While the clinical flop for GWP42006 is disappointing, investors should keep their focus on the main attraction for GW Pharmaceuticals -- the company's cannabidiol (CBD) drug Epidiolex.

The U.S. Food and Drug Administration (FDA) should make an approval decision by June 27, 2018 on Epidiolex in treating Dravet syndrome and Lennox-Gastaut syndrome (LGS). Prior to that decision, an FDA advisory committee will meet to review the filing for the drug. This advisory committee will make a recommendation about whether or not Epidiolex should be approved, but the FDA isn't obligated to follow this recommendation.

If Epidiolex is approved, the next step will be for the drug to be rescheduled by the U.S. Drug Enforcement Administration (DEA). That process should take no longer than 90 days. If all goes well, GW could launch Epidiolex by sometime in September of this year.

And that launch could be a big one. Market research firm EvaluatePharma reviewed all new drugs expected to launch in 2018 by projected 2022 sales. Epidiolex ranked No. 10 on the firm's list, with estimated 2022 sales of close to $1 billion.

Should investors consider buying GW Pharmaceuticals stock on the dip? I think so.

It would have been great if the phase 2a study for GWP42006 had been an unqualified success. While that didn't happen, I wouldn't automatically assume that the CBDV compound won't be effective in other studies.

The critical key to GW Pharmaceuticals' fortunes is Epidiolex. If the CBD drug can generate the level of sales that many expect, the biotech stock has plenty of room to move higher. Although anything can happen with the regulatory-approval process, I think Epidiolex will win FDA approval this summer. I also think that GW Pharmaceuticals is taking the right steps now to improve the chances for a successful commercial launch later this year.

In my opinion, the pullback for GW stock on the CBDV clinical failure is in line with what should be expected. But I also view it as a good opportunity for investors to buy the stock for a cheaper price. With a major catalyst on the way, buying now could pay off later this year.