Please ensure Javascript is enabled for purposes of website accessibility
Log In Help Join The Motley Fool
Free Article Join Over 1 Million Premium Members And Get More In-Depth Stock Guidance and Research
By Brian Stoffel - Feb 23, 2018 at 11:05AM

You probably won't be able to buy shares. Here's why.

By the time 2023 rolls around, you likely won't be able to buy shares of TripAdvisor (TRIP 1.67%). That's not because the company will go bankrupt -- far from it: The review site is an incredibly powerful and popular tool for travelers worldwide.

Instead, it will likely be acquired. And that's good news for current shareholders because management -- in my opinion -- has proven that it doesn't know how to monetize what it has, take smart risks, or fulfill its greater mission. The only real question is: Who will acquire it? 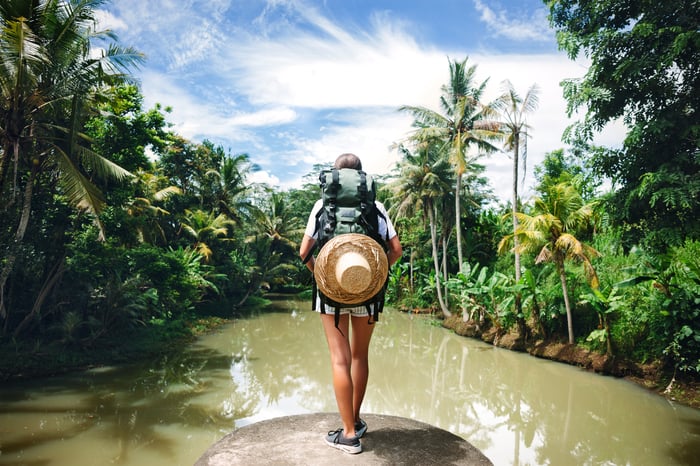 There are few forces more powerful in the business world than the network effect. Simply put, with each additional user of a product or service, that product or service becomes even more valuable for the other users. TripAdvisor is a textbook case: Because it has become the place to plan a trip, travelers flock to the site.

Each additional users adds value, as they add more data points to help us all plan a better trip. Just as important, hotels, restaurants, and attractions have quickly found out that if they aren't listed on TripAdvisor's platform, they can kiss their growth prospects goodbye.

All the while, those who profit from the industry have taken note. 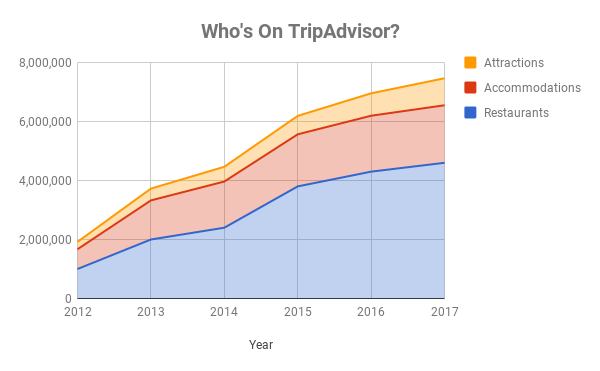 Barking up the wrong tree

But for all the success TripAdvisor had in attracting users, it failed to translate that success into monetization. Most revenue came from click-based advertising for hotels, and almost half of that revenue came from just two sources: Expedia -- the company from which TripAdvisor was spun out -- and Priceline.

But did it have to be this way? By the company's own admission in its annual report (emphasis added): "A significant percentage of our users are not hotel shoppers and visit TripAdvisor sites without navigating to pages that contain a listing of hotels in a particular city or a specific hotel's page."

Yes, the money that came from such advertising was relatively high-margin and easy to make, given TripAdvisor's network effects. But it made the company vulnerable to the whims of Priceline and Expedia, and it failed to do much of anything for the millions of restaurants and attractions that were reviewed on the site.

In 2014, the company introduced Instant Booking -- allowing visitors to the site to book directly with hotels. The venture stumbled out of the gate, and has largely failed. It was a huge bet on becoming independent of Expedia and Priceline, and -- in my opinion -- was also unnecessary.

Where the opportunity really lies

Focusing on restaurants and -- especially -- attractions would have taken a lot more work and investment on the front end, but would have been a much better way to strengthen the company's moat and long-term potential.

To that end, TripAdvisor does have "non-Hotel" revenue that it began reporting two years ago. This includes vacation rentals -- which are largely being eroded by Airbnb, food reservations booked through The Fork, and attraction reservations booked via Viator. Revenue from these three has improved markedly, up 220% between 2014 and last year to $360 million. It now accounts for 23% of all revenue and is contributing to the company's bottom line.

But even then, I am underwhelmed by TripAdvisor's follow-through on its stated mission of "helping people around the world plan and have the perfect trip." Last year, my hometown newspaper -- the Milwaukee Journal-Sentinel -- uncovered multiple cases where alcohol-related blackouts, rapes, and assaults had been posted to warn tourists on TripAdvisor, but the company took them down.

Such instances create the appearance that the company values the merchants on the company's site more than the tourists. The funny thing about the network effect is that it can be just as powerful at getting users to abandon a platform as it entices them into joining it. The investigation -- which is worth a read -- paints a picture of a management team that isn't sure where its priorities lie.

A suitor to the rescue

Right now, however, it's clear that there's still significant value on TripAdvisor's platform. And that should entice suitors. The two most obvious candidates are Priceline and Expedia. The former has a war chest and the size to make the deal happen, and the latter is the former parent company of TripAdvisor.

But I would also argue that Airbnb could be a dark-horse candidate for a takeover. The company has already begun offering ancillary services that complement TripAdvisor's non-hotel revenue, and could be a major coup if acquired.

The bottom line, however, is this: TripAdvisor is a valuable property that isn't being monetized or used to fulfill its stated mission. The right leadership team can fix that situation. Within five years, I expect someone to act on these dynamics.

Why Travel Stocks Jumped This Week