Please ensure Javascript is enabled for purposes of website accessibility
Log In Help Join The Motley Fool
Free Article Join Over 1 Million Premium Members And Get More In-Depth Stock Guidance and Research
By Matthew Frankel, CFP® - Feb 26, 2018 at 6:33AM

Here are five common misconceptions that could result in higher-than-expected student loan debt.

Student loan debt is bigger than all other types of debt held by Americans, other than mortgages. Roughly 44 million Americans owe just shy of $1.5 trillion in student loan debt as of 2018.

Alarmingly, it appears that many student loan borrowers have serious misconceptions about how their loans work, according to a new survey by Student Loan Hero. Here are five of the most dangerous student loan myths the survey uncovered, and the truth behind each one. 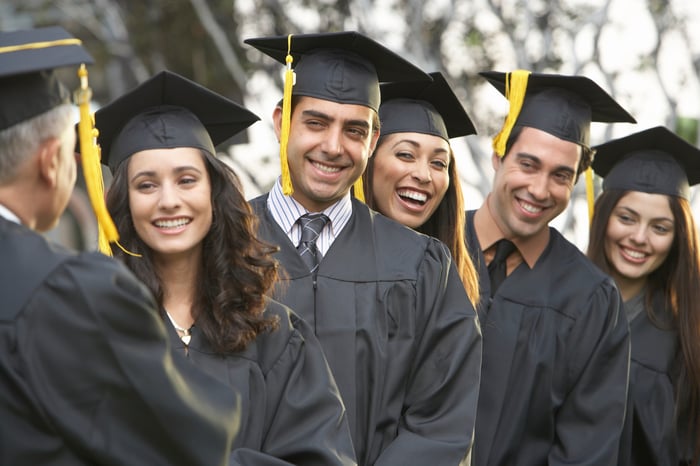 1. 52% of student loan borrowers believe interest doesn't accrue on unsubsidized loans while they're in school

If you have subsidized student loans, the federal government pays your interest while you're in school. However, if you have unsubsidized loans, which the majority of federal student loans are, the interest accumulates even while you're in school. In other words, if you borrow $10,000 for school at 6%, your balance will be $600 higher in a year. As you can probably imagine, this can add up significantly over four or more years of school and can result in you owing thousands more than you anticipated.

2. 47% of borrowers think that interest doesn't accrue while loans are in forbearance

There are two methods of suspending your student loan payments -- a deferment or forbearance. A deferment is generally the better of the two options if you qualify based on being in school at least half-time, if you're unemployed, or if you're experiencing an economic hardship. Even under a deferment, the government only pays the interest on Federal Perkins Loans and subsidized student loans.

A forbearance can be granted for up to 12 months if you don't qualify for a deferment. And despite what nearly half of borrowers believe, interest accumulates on all student loans during a forbearance -- even subsidized loans.

Don't get me wrong -- if you need a deferment or forbearance, it can be a great tool to help you get back on sound financial footing without having to worry about your student loans. Just keep in mind that it isn't exactly "free," so be sure to take this into consideration.

Income-based student loan repayment plans, like the Pay as You Earn (PAYE) plan, are unquestionably one of the best tools to help borrowers repay student loan debt. Under the PAYE plan, your loan payments are capped at 10% of your "discretionary income," and any remaining balance after 20 years is forgiven. There are a few other income-based repayment plans for those who don't qualify for the PAYE plan.

If you want income-based repayment (which I highly recommend for most borrowers), you'll need to apply through your loan servicer.

4. 71% of borrowers believe private loans can be eligible for the Public Service Loan Forgiveness program

This is a shockingly popular misconception. The Public Service Loan Forgiveness program is designed to forgive a student's remaining debt after the student makes 10 years' worth of on-time payments while working in a public service occupation. The idea is to give teachers, police officers, and other public-sector workers incentive to pursue these occupations even though better salaries are typically available in the private sector.

Here's the important point: Only federal student loans qualify for the program. The federal government has absolutely no interest in paying back your private student loans, no matter how much public service work you perform.

5. 10% of borrowers believe you don't have to start paying your loans back if you can't find a job after graduation

Finally, while this one isn't a widespread myth, it is rather dangerous for those who believe it. To be perfectly clear, once you take out a student loan, the debt is yours. Student loans generally cannot even be discharged in bankruptcy.

That said, federal student loan servicers are happy to work with borrowers facing tough times. I already mentioned deferments and forbearance programs, which are commonly used by borrowers who have a tough time finding a job after college. However, the debt is still yours and will need to be paid back, regardless of your job-hunting success.