Please ensure Javascript is enabled for purposes of website accessibility
Log In Help Join The Motley Fool
Free Article Join Over 1 Million Premium Members And Get More In-Depth Stock Guidance and Research
By Dan Caplinger - Feb 26, 2018 at 11:01AM

The Oracle of Omaha had another market-beating year in 2017.

Even if you don't invest, you've probably heard of Warren Buffett. The investor behind the megaconglomerate Berkshire Hathaway (BRK.A 3.75%) (BRK.B 4.02%) has a devoted following of fans in the investing community, and his down-to-earth attitude toward money gives the billionaire a reputation for being an approachable straight shooter.

Buffett's biggest claim to fame is the track record of strong returns that he's put together at Berkshire Hathaway. Over a history that spans more than 50 years, Buffett has more than doubled the overall stock market's return, producing average annual gains of nearly 21% compared to the S&P 500's 10%. 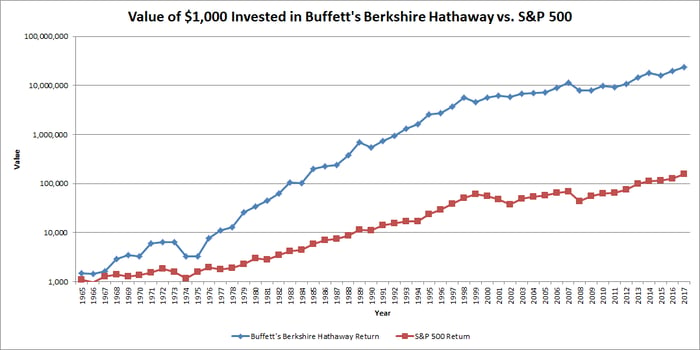 The most impressive thing about Buffett's outperformance is how the power of compound returns has produced life-changing wealth for his early shareholders. Since 1964, Berkshire shares have risen by more than 2,400,000% -- turning every $1,000 invested back then into $24 million. By contrast, the S&P's performance translates into total returns of 15,500% -- still impressive, but $155,000 is a lot less than $24 million.

Buffett only managed to top the S&P by a 10th of a percentage point in 2017, but he's optimistic about Berkshire Hathaway's future. Though there's already a team in place to ensure the 87-year-old's legacy will endure after he's no longer able to run the company, Berkshire investors hope that Buffett will stick around for years to come.