Black Panther shredded box office records and gave a boost to exhibition stocks in the process. Is this a head fake or part of a meaningful turnaround?

While many expected Marvel's Black Panther to be successful, even the most enthusiastic forecasts were smashed by the king of Wakanda. The movie generated $207 million in opening-weekend domestic box office, the fourth-highest in history.

The four-day total of $242 million in ticket sales over the Presidents Day weekend clawed its way to the second spot behind only Star Wars: The Force Awakens, while taking out a number of other records along the way. The film has single-handedly obliterated talk of superhero fatigue, but it's also given the entire movie industry a much-needed boost.

Does this mark a turning point for the beleaguered exhibition industry?

Black Panther bounded to the top of the box office. Image source: IMAX.

A helping hand -- or claw

A movie with this type of drawing power couldn't come at a better time for movie theater investors. Changing consumer demand has pummeled theater investments in recent times. While the S&P 500 gained 29% over the past three years, stocks for the largest film exhibitors have taken it on the chin. Those that fared best, Regal Entertainment Group (NYSE: RGC) and Cinemark Holdings, Inc. (CNK -0.93%), were near breakeven, while IMAX Corporation (IMAX 1.39%) and AMC Entertainment Holdings, Inc. (AMC -5.31%) were the hardest hit, losing 35% and 55%, respectively -- even after rebounding from their lows late last year. 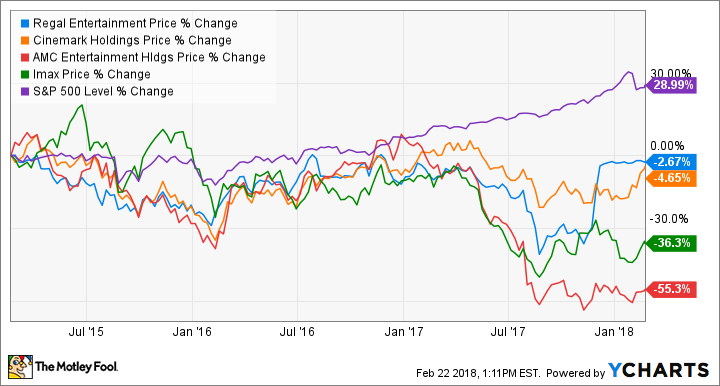 Black Panther has spurred a number of records for theater companies. During its first four days, AMC screened Black Panther more than 40,000 times. At more than 150 AMC locations -- nearly 23% of the chain's domestic circuit -- the movie set all-time admissions-revenue records for a single title on opening weekend. Additionally, 15 multiplexes more than doubled their previous records, with two even tripling their previous high take. AMC booked the second best Saturday in the company's history, while Sunday was the best ever.

Elizabeth Frank, AMC EVP, Worldwide Programming and Chief Content Officer said, "Black Panther has taken on a life of its own at movie theatres, playing to huge, broad audiences in AMC markets around the country, and is growing from a blockbuster into a movement nationwide."

It is important to note that IMAX also benefited from a stellar weekend in China that coincided with Chinese New Year. While Black Panther has not yet premiered in the Middle Kingdom, a trio of local releases brought moviegoers out in droves. Monster Hunt 2, Detective China Town 2, and Operation Red Sea stormed the box office, with Monster Hunt 2 generating the single-biggest opening-day box-office ever for a Chinese movie. IMAX scored a record $18 million in China over the four-day period, a 60% increase over the same time last year.

Is this a turning point? Image source: Getty Images.

While Black Panther offered movie exhibitors a much-needed boost, it merely confirmed what we've known all along: Movie-goers will flock to theaters when Hollywood makes great movies, but that doesn't change the overriding societal trends.

Ticket sales have been in a steady decline since peaking in 2002, with domestic theater admissions falling from 1.6 billion to a 1.24 billion in 2017, the lowest attendance levels in 25 years. A weak slate of movies, escalating ticket and concession prices, and options like streaming have all played a role in recent declines.

Consumers have more entertainment choices than ever before, and while the death of movie theaters has been greatly exaggerated, the golden age of cinema is likely in the rearview mirror.