Many businesses are moving to the cloud, and numerous companies are poised to reap the benefits.

The cloud revolution has arrived!

"Organizations ... are leveraging public cloud services to quickly develop and launch 3rd Platform solutions, such as big data and analytics and the internet of things (IoT), that will enhance and optimize the customer's journey and lower operational costs," said Eileen Smith, IDC's director of customer insights and analysis.

Let's look at some of the leaders in each segment of the cloud, to understand why Amazon.com, Inc. (AMZN 3.15%), Adobe Systems Incorporated (ADBE 0.66%), Shopify Inc. (SHOP 0.54%), and Microsoft Corporation (MSFT 1.07%) are positioned to benefit from the revolution.

What is the cloud?

"The cloud" might seem like a fuzzy term, but the reality is quite simple. The key component that defines the cloud is the ability to store and access data and computer programs over the internet -- instead of locally on your computer. The cloud is a metaphor for the internet, as a diagram of a cloud was used in the early days to represent what was then an abstract concept. One of the major advantages that result from the cloud is the ability to access information anywhere you have any internet connection.

The cloud can describe the location where the data is stored, or the physical infrastructure of servers, networks, and data centers that makes it possible to access stored information over an internet connection. The largest cloud providers maintain hardware in a variety of locations around the world to facilitate its use.

Cloud services are available to enterprise and consumer markets, and there are several broad categories of platforms or services available.

Infrastructure-as-a-service (IaaS) allows companies to buy time and space in data centers on an as-needed basis and is the fastest-growing category in cloud services. These essentially provide a blank computing slate for customers on a pay-as-you-go basis. This category is expected to see the fastest spending growth among cloud services.

Software-as-a-service (SaaS) is currently the largest cloud category and will capture the lion's share of cloud spending, though its growth has slowed. It is typically subscription based, wherein the provider installs and configures software applications on its servers and provides access to subscribers. The provider also normally handles installing any required updates and security releases.

Platform-as-a-service (PaaS) is a cloud platform for software developers that provides the hardware and software tools, as well as the platform and environment for application development. This includes anything necessary for the creation, running, and testing of software and apps.

It is also important to note that none of these categories has solid borders, and lines continue to blur. In addition, many companies operate in multiple segments of the market at the same time.

Several of the largest technology companies are fighting for supremacy in the IaaS market, but let's talk about the 800-pound gorilla in the room. Amazon Web Services (AWS) is the granddaddy of them all and the one that started the cloud revolution. The company maintained hordes of servers that were necessary to meet periods of peak demand for its e-commerce operations. That meant that during slower times, large amounts of processing power and server space went unused. Rather than let those resources go to waste, Amazon decided to lease them out to other companies, and the infrastructure-as-a-service platform was born.

Since then, what began as a side business has become Amazon's fastest growing and most profitable enterprise. In 2017, AWS produced revenue of $17.5 billion, up 43% year over year, while operating income for the segment grew 39% over the prior year. This cloud sideline accounted for 10% of Amazon's revenue and all of its operating income for the year, even subsidizing the growth of its e-commerce empire.

Adobe is best known for its creative suite of products, including Photoshop and its Portable Document Formats, better known as PDFs. About four years ago, the company decided to migrate its business from selling shrink-wrapped software to selling subscriptions of software-as-a-service. Adobe added Web analytics and AI to its cloud offerings, and the results speak for themselves.

Adobe was one of the top performers of the year, with its stock price growing 70% in 2017. For the fiscal year that ended Dec. 1, Adobe generated revenue of $7.3 billion, up 25% year over year, while net income jumped 45% over the prior year. Annualized recurring revenue grew to $5.23 billion exiting the year -- showing that the company's decision to switch to a cloud, subscription-based model was the right one. 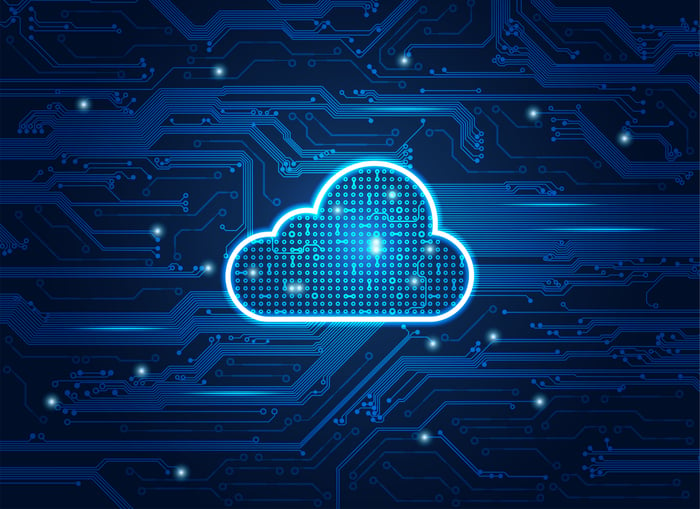 Cloud spending is on the rise. Image source: Getty Images.

Then there's Shopify. Every so often, a company sits at the intersection of two important trends and stands to reap significant benefits. Imagine a company that provides software-as-a-service to the budding e-commerce industry. While SaaS has produced its share of winners over the past several years, no company has leveraged this opportunity more than Shopify. The company's cloud platform helps small- and medium-sized businesses set up and maintain an online store.

Sitting at the juncture of e-commerce and the cloud has served this company well. Since going public in the second quarter of 2015, Shopify has produced year-over-year revenue growth that has exceeded 71% in every quarter, while gross merchandise volumes have topped 65%.

It would be difficult to generate a list of top cloud stocks without including Microsoft. The company's Azure Cloud is a leader in PaaS, but it also ranks in IaaS, second only to Amazon. Microsoft Office 365 is a top contender in SaaS. In fact, Microsoft revealed last year that it was placed in the leader's quadrant in 13 different Gartner cloud ratings.

In its fiscal 2018 second quarter, which ended Dec. 31, Microsoft's intelligent cloud segment, which includes Azure, enterprise services, and server products, increased revenue to $7.8 billion, up 15% year over year. While the company doesn't break out its cloud computing revenue, it reported that Azure revenue grew 98% over the prior-year quarter.

While it may seem that the cloud is everywhere, it is still a relatively new concept -- and it's catching on fast.

The cloud offers businesses a host of advantages, including a reduction in IT costs, continually updated software, worldwide round-the-clock access, and scalability. As more and more companies begin tapping into these benefits, the cloud providers positioned to serve those needs stand to reap the greatest rewards.