The opportunity in cloud computing will continue to grow and the market leaders are in a great place for investors to jump on board.

Cloud computing is big business. Public cloud spending is expected to grow 18% year over year to an estimated $260 billion in 2017, according to market research company Gartner. That growth is expected to skyrocket to $411 billion by 2020.

Gartner states that the growth in cloud computing will be driven by "the migration of infrastructure to the cloud and increased demand from increasingly compute-intensive workloads (such as artificial intelligence [AI], analytics and Internet of Things [IoT])."

The market size of this opportunity is attracting the biggest names in technology. Investors looking to profit from this growing trend should consider Amazon.com ( AMZN 2.80% ), Microsoft Corporation ( MSFT 2.68% ), and Alphabet Inc. ( GOOGL 2.87% ) ( GOOG 2.95% ), the clear leaders in the cloud computing revolution. 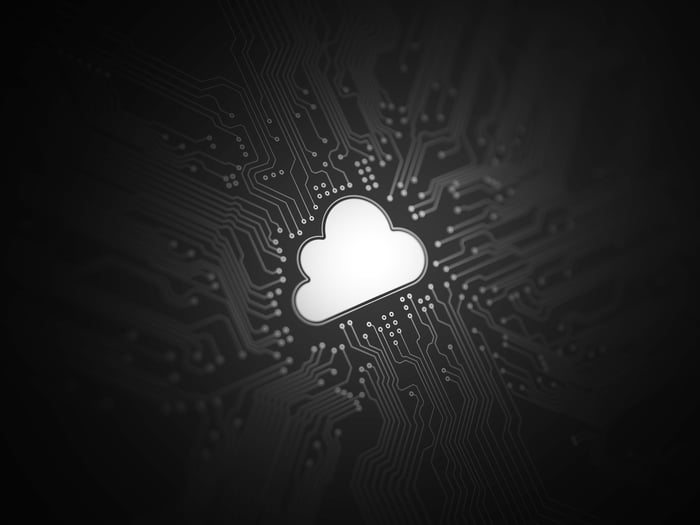 Cloud computing in its simplest terms is the storing and accessing of computer programs and data over the internet. These services are typically used as needed or on demand. The "cloud" referred to in cloud computing is the internet, so called because, in the early days online, some diagrams used the image of clouds to depict a concept that was not as widely understood as it is today.

In some instances, a business may need additional computing resources, and making a large capital investment for additional servers or software might not be practical. This is especially true when trying to meet peak or seasonal demand. Cloud computing can provide a cost-effective solution.

There are several types of services that are covered under the broad heading of cloud computing.

Infrastructure-as-a-service (IaaS) allows companies to rent time and space on servers on a pay-as-you-go basis, and the segment is expected to post the most substantial growth over the next five years.

Software-as-a-service (SaaS) is -- as the name implies -- the use or delivery of software applications via the internet. These normally require a subscription and the provider will typically handle any regular maintenance updates and security patches. Microsoft Office 365 is a great example of this.

Platform-as-a-service (PaaS) provides the platform, environment, and tools necessary to for the development, running, and testing of apps and software. A software developer kit like Google's App Engine is a good illustration.

Cloud computing can also be used for file storage, backup and recovery, and data analytics. Almost anything that can be accomplished locally can be done in the cloud. 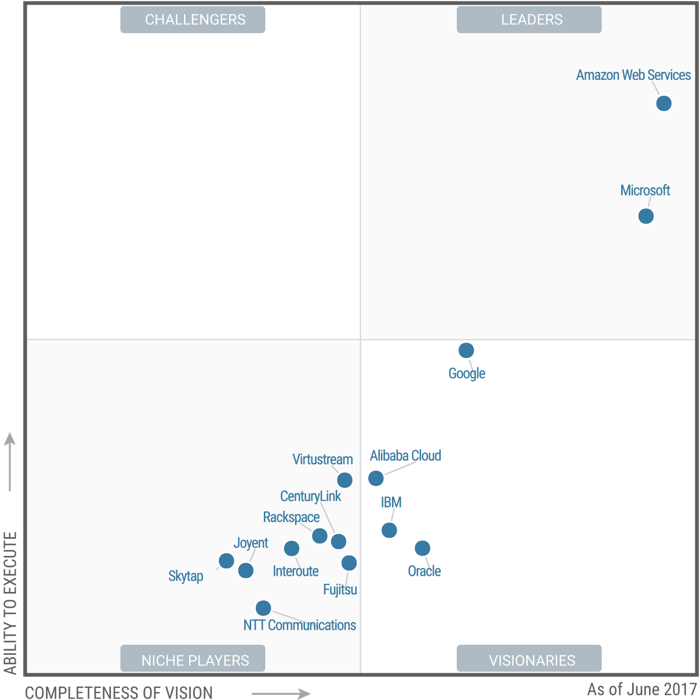 When it comes to cloud computing, Amazon is the 800-pound gorilla in the room. The company debuted Amazon Web Services (AWS) in 2006 as a way of renting unused space on its massive server farms, and in doing so, pioneered the IaaS market.

From those humble beginnings, AWS has become Amazon's fastest growing and most profitable business segment. To give this some perspective, Synergy Research Group estimates that Amazon's cloud business is "bigger than it next five largest competitors combined."

According to Gartner's Magic Quadrant Amazon is the undisputed frontrunner in IaaS and has been for the last decade. It controls an estimated 40% of the market and a significant lead over its next nearest competitor. The company also leads in the integrated IaaS+PaaS market. AWS offers a wide variety of pay-as-you-go services including database storage, application services, analytics, and artificial intelligence.

In the third quarter 2017, AWS saw net sales grow 55% year over year, producing 10% of Amazon's revenue and all of its profit. In fact, AWS is currently subsidizing the company's e-commerce business, which is operating at a loss. The reason the cloud computing segment contributed so much is because of its really massive operating margins. Of the $4.6 billion in revenue generated by AWS, it produced operating income of $1.17 billion -- operating margins of over 25%.

The customer list for AWS is a veritable Who's Who of well-known companies, including Netflix, Inc., Ancestry.com, Expedia, Inc., Live Nation Entertainment, and Hulu. 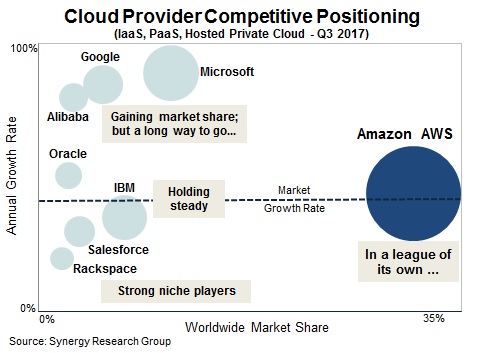 Microsoft is a significant player in more than one segment of cloud computing. The company is the leader in the SaaS market according to Synergy Research Group.

Microsoft is also a key player in the IaaS market, with its Azure cloud platform second to only AWS, with an estimated 11% market share. The company is also the only other company in the "leader" quadrant, according to Gartner, which estimated Azure's end-of-2016 revenue run rate at approximately $3 billion. Azure has been seeing robust adoption, particularly among those with a penchant for Microsoft products and working environment.

While Azure's offerings are still dwarfed by AWS, the company continues to beef up Azure to include additional services and its expertise to help customers with deployment.

In the most recent quarter, Microsoft's Office commercial products grew 10%, largely the result of commercial revenue from Office 365, which jumped 42% year over year. The company's intelligent cloud segment grew 17% year over year, with revenue from its Azure Cloud increasing 90% over the prior-year quarter.

Google is known for its ubiquitous search, but because of the data centers and server farms needed to facilitate that business, the company has effectively been a cloud company since day one. Google places a distant third in the cloud computing arena, garnering an estimated 6% of the market. It should be noted that while the company has had a platform offering since 2008, it didn't enter the IaaS market until 2013. Google Cloud has made remarkable headway in a relatively short time, and the company has been aggressively playing catch-up.

Urs Hölzle, Google's senior vice president of technical infrastructure, has stated that he believes that within several years, the company's cloud computing will generate as much revenue as its advertising business. Two years ago, the company hired Diane Greene, co-founder of VMWare to run its cloud business. Ms. Green believes that Google Cloud could take on AWS for the top spot as early as 2022.

Google also believes its world-class artificial intelligence will attract an increasing number of cloud customers. The company is a pioneer in the field of AI, and during its third quarter 2017 earnings conference call, Google CEO Sundar Pichai stated, "Customers tell us they are switching to Google Cloud Platform because of our prowess in data analytics and machine learning."

For the three months ended September 30, 2017, Google's "other revenues", which includes cloud computing and the Google Play app store, grew 40% year over year to $3.4 billion and amounted to 12% of Google's revenue, up from 11% in the prior year period.

Cloud computing is still a relatively young concept, having been pioneered by Amazon in 2006. Cisco's Global Cloud Index report estimates that annual global cloud traffic will grow at a compound annual growth rate of 30% between 2015 and 2020 and more than quadrupled during that time. The report also forecasts that over the same five years, public cloud workloads will grow from 49% of the total to 68%.

This continuing migration to the cloud will provide a growing and lucrative opportunity for cloud providers. The market leaders in cloud computing will provide a way for businesses to tap into technological advances such as cybersecurity, the internet of things, and artificial intelligence. According to John Dinsdale, a Chief Analyst and Research Director at Synergy Research Group, "it is becoming increasingly difficult for cloud providers outside of the leading pack to make an impression on the market share rankings."

The early movers in this field will continue to reap the benefits for years and possibly decades to come.